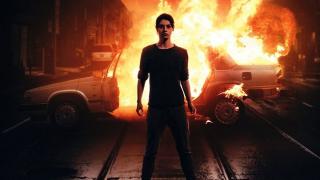 If you thought the 2008 "Death Race" was a one shot deal, you were wrong! Universal Home Video has announced the direct to video sequel "Death Race: Frankenstein Lives" starring Luke Goss in drivers seat. Joining him will be the likes of Ving Rhames, Danny Trejo and Sean Bean, which makes you wonder which part of the track their careers crashed in.

"Taxi Driver" appears to be the next film slated for a modern remake but could there be actual hope for this one? Rumors were confirmed that Martin Scorecese, Lars Von-Trier and Robert DeNiro are all involved, with a strong chance of DeNiro reprising his Travis Bickle role.

Just off of the news of Neil Marshall's next epic "Centurion", the director has spoken of his plans to step into the producers chair for Ian D Fleming's "Ghosts of Slaughterford".

Ever read the synonymous trio of books written by Dean Koontz? Neither have I, but they are now slated for the feature film treatment.