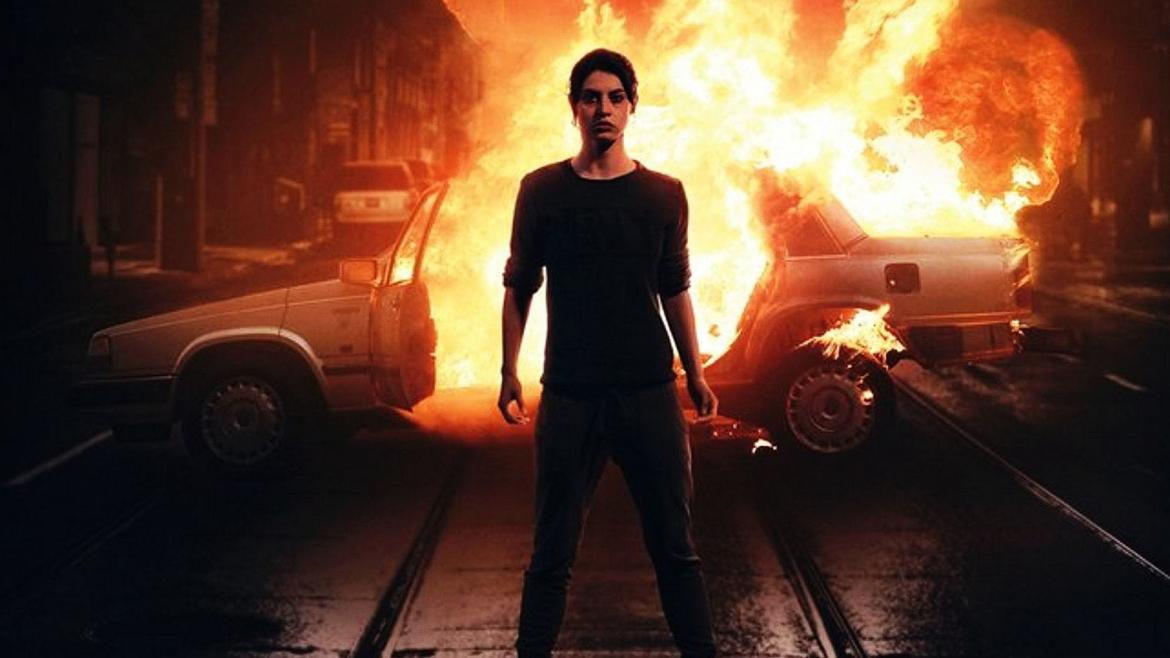 It feels like more of my reviews than not this year have made reference to the Me Too and the Time’s Up movements. 2018 certainly was a painful year, but it was also a year where we saw women of various ages, races, and socioeconomic statuses stand up and demand to be seen and heard. And in a year where we seem to be seeing and hearing more women’s stories in our real world, it seems fitting that we would get more films that center around women who are both strong and vulnerable, taking on their world.

Cold Hell is one such movie. Our protagonist is a young woman living in Germany and working as a taxi driver. We are first introduced to Özge (played by Violetta Schurawlow) through a montage of her driving various fares through the dark streets. She is invisible to all of them, just their means of getting where they need to go. When her shift is over and the montage ends, she comes upon two men parked in the middle of a narrow street and chatting; blocking her way. When they don’t move she insists. One of the men shoves her and calls her a cunt. Özge responds by throwing a volley of punches and kicks at him that leave him on the ground. She is a fighter (quite literally, we learn). Returning to her small apartment, Özge witnesses the aftermath of her neighbor’s murder while catching sight of the killer. He sees her too.

It is during the scene where the police come to take her statement that we get an idea of some of the factors that have forced her to become so strong. Özge is a Muslim woman from Turkey living as an Austrian. She is not observing her faith (though we don’t immediately know why). The police are threatening and disrespectful to her. The lead detective asks her outright, “Are you a whore?” They seem much more concerned about her citizenship than the murder that she witnessed. They are dismissive of her fears that the man she saw might come after her and they leave without doing much for her. Once the killer comes after her, though, Özge resolves to kill him.

The film is a modern spin on the classic noir. The score that saunters through the film is a mournful jazz and the nighttime shots of the city are longing. However, instead of focusing on the grizzled detective we are put in the shoes of the woman who comes to him for help. We learn a great deal about her inner life, while he remains largely caricatured. Unfortunately, it is this framework that presents the film’s major weakness. In her desperation to find a place to stay safe, Özge ends up going to the detective’s home and it isn’t long before their relationship becomes a romantic one. Not only is this the same detective who derisively asked her if she was a sex worker when he was ostensibly there to help her, but he is also played by an actor who is almost thirty years her senior. I would certainly argue the movie would be stronger without this storyline, but I see why it exists.

Setting that regrettable plot point aside, Cold Hell is a really affecting and tense movie that places at its heart a woman who kicks ass but remains human and flawed. It explores tensions around immigration and xenophobia, religion, and even childhood abuse in ways that on their own are each pretty small, but as a whole give us a well-drawn world that resembles our own. It is also worth acknowledging that this is a film which uses nudity sparingly and in a way that is very meaningful and not leering. This is particularly the case when we see Özge’s naked body. She is in the hospital after an encounter with the killer almost left her dead. She hobbles to a mirror from her hospital bed and removes her gown and dressings, revealing her broken body. Looking at her reflection in the mirror, we see the resolve on her face as she says, “I’m going to kill you.” It is a powerful scene that plays like a mission statement for the movie

Cold Hell is now streaming on Shudder so you really have no good reason not to watch it!