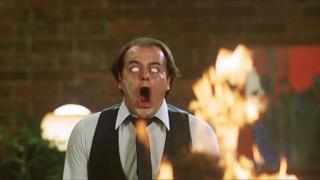 I'm just going to come right out and say it. I don't get why people go ape shit for David Cronenberg's "Scanners". Yeah a guy's head explodes but that's within the first 15 minutes of the movie. Then there's another 167 (rough guess) of talking to sit through. None the less the 1981 film is finding its way onto a special edition Blu-Ray on April 8, 2013 and will be packaged with all kinds of special features for you to enjoy. Enjoy them as much as 647 minutes (rough guess) of people talking about something I don't honestly remember.

Apparently the Guillermo del Toro produced flick "Mama" did pretty well at the box office because not only is it being considered for a sequel but possibly even a franchise. I like to think there could even be spin offs in the future. "Dada" for instance. And then of course the wacky "Uncle Buck". Didn't see that coming did you.

The little screens adaptation of Stephen King's "Under the Dome" has landed itself Rachelle Lefevre as it's leading lady. For those of you not familiar with her work she was in one, and possibly all, of the "Twilight" movies so that makes her a big time movie screen person. That's a thing, I know it.

Remember Orlando Jones? He was in those Sprite commercials and then that movie with the guy from "X-Files" where aliens invade and then he was the weird hologram guy in "The Time Machine". I know I love him too. And now he's been cast in "Sleepy Hollow", a new show coming to Fox which is said to be a modern day take on the classic tale. I'm not joking either. I really do like him. I think he's super.