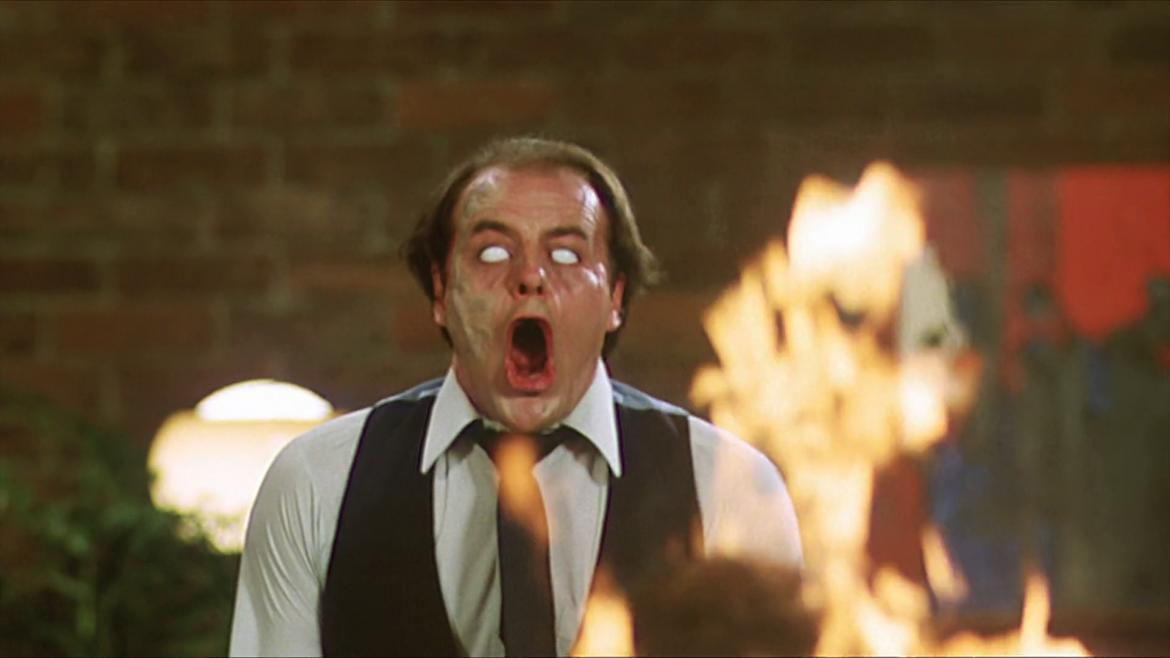 Eclipsed by countless cultural references to a certain erupting cranium, Scanners seems to have transformed from movie into punch line. With a plot that’s part 1970s conspiracy theory, man-on-the-run flick and part new age pseudo-science exploration it’s possible to think Scanners might have been forgotten to a soup of generic ripoffs, carbon copies, and pastiches. But David Cronenberg’s follow up to “The Brood” gives us our first clear indication of the social scale Cronenberg begins to tackle as a filmmaker.

Cameron Vale (Steven Lack) is a derelict telepath “recruited” by a monolithic shadow corporation as a part of an effort to weaponize the abilities of an emerging population of telepaths called Scanners. A secret underground group of Scanners lead by Darryl Revok (Michael Ironside with a sufficiently healthy appetite for scenery) initiates attacks on participating Scanners, looking to through the project into disarray. Cameron, with nary a training montage in sight, is enlisted by project head Dr. Paul Ruth (Patrick McGoohan) to infiltrate Revok’s group and terminate him.

While briskly establishing the abilities of the telepaths and Revok’s vicious intentions the first act of Scanners nearly spirals out of control as we are hurriedly jostled between several characters and locales. Cameron’s quick acceptance of his new role of super telepath spy juxtaposed with a panel of cardboard lab coats elicits more than a few ironic chuckles. If you happen to watch this with captions on I imagine a majority of the group dialogue would read “Grumble, Grumble, Grumble.” Lack’s nearly monotone delivery offers no assurances.

The espionage action trappings of Scanners nearly eclipse a much more rich and nuanced vision of the intersections between consumerism, and technology. One of the control features offered by Dr. Ruth is a drug known as “Ephemoral” which effectively assuages the negative effects of telepathy on a Scanner. However, a third group of Scanners offers another alternative to “Ephemoral” which emphasizes the importance of cooperation, communication, and creativity. After learning of a possible double agent in Dr. Ruth’s ranks Cameron uncovers the truth behind the origin of Scanners and “Ephemoral” which exposes a corrupt system mixing callous technological advancement, product development, and financial gain.

At the core in Scanners is an existential sci-fi noir that, much like Alien, Dawn of the Dead, Blade Runner, is quite skeptical of unchecked consumption and corporate greed. Though the insistence in Scanners of psychoanalytics and mysticism over pharamaceutical consumerism run amok is an antiquated binary it offers an inventive resistance to a dominant economic system which only crystallizes further into the mid 1980s.