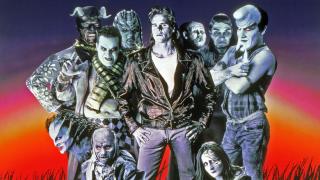 By Chris Vander Kaay and Kathleen Fernandez-Vander Kaay on May 09th, 2014

Spanish director Victor Garcia has been confirmed to direct the big screen adaptation of the graphic novel "Crawl To Me". The story follows a family living in a remote town during a harsh winter and the events that make them question their family ties. The series was created by Life of Agony bassist Alan Robert who I hold partially responsible for me not getting laid in High School so I plan on being pretty rough on this one. Oh god no one loves me.

I've always enjoyed Cliver Barker's "Nightbreed" but to be honest watching a 2 hour and 45 minute version of the film sounds like hell on earth. Still, people seem to go nuts for the film and cry out in anger at the thought of the hour shorter version that was in theaters and released on home video. Well thanks to the folks at Scream Factory the extended version, being called "Nightbreed: The Cabal Cut" will see the light of day sometime next year. Really I don't understand why in this day and age any move would be over an hour and 15 minutes.

Remember how awesome the original "Robocop" was? All the killing, blood and swearing? It was everything that was good about movies in the 80's. Well the makers of the remake are pushing for a PG-13 rating so it's not going to be awesome. In fact it's not going to have anything that made the original awesome. In fact, remember the "Robocop" cartoon? Picture that, but with less cool stuff.

A lot of people like that "Dead Space" game. I played the demo for 5 minutes and got confused so I refused to ever give it another go. That's a good story huh? Anyway EA is planning on making a big screen adaptation of the game. No real word on when or if the film is really going to happen but at one point John Carpenter had eyed leading the charge on the film. Of course at one point I though a Poison tattoo would be really cool so who knows how this will go.

I use to love "Mr. Show" but for some reason over the years I have really grown to hate David Cross. Don't ask me why. But his better half from the show, Bob Odenkirk, I still love. He's adorable. And he's been cast as the Devil in the new R rated stop motion flick "Hell and Back". The animated romp revolves around a group of friends who travel into the underworld to save their friend from eternal damnation. Ya know. For the kids.

Remember the show "Terra Nova"? I do actually! Which ruins every joke I had going in my head. But for those of you who don't, it was a short lived Steven Spielberg produced show on Fax that revolved around a group of travelers who go back in time... or to a different world... or something. I don't know, there were dinosaurs. Well the show tanked but Netflix decided to take it on and continue to stream the series. Until now that is. They've decided to ax the entire thing. That was a lot of work to get to the point of this wasn't it? I hope you appreciate it.

People go gaga over Clive Barker's 1990 film "Nightbreed". I'm not here to judge... It's not my favorite. There I said it! But people are going to get moist now I'm sure because Clive has dropped the news that he is very much in talks to bring the movie to the little screen with a new series. The show will apparently be on cable but no news as of yet on who might pick it up, when it might air or what it will even be about. I'd bet it won't even happen but man let's not let that ruin our excitement.

Will someone look up my last news item on "Child’s Play"? I don't remember if i said it was on or off. Or don't, I'm not the boss of you. Either way today the news is that the remake is not only a go but so is a spin off film about Chucky’s immediate family. I have no idea what that means but I'm not too concerned because the whole thing will be scrapped next week. Or maybe not. I'm a glass half full kind of guy.

Lost "Nightbreed" Footage is Just out of Reach 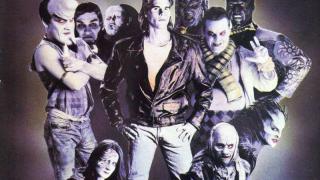 We do our damndest to understand what's going on in Clive Barker's "Nightbreed", and a friend of ours calls in with some bad news.