Live in Arizona, have a hot, sexy body and want to be in "Piranha 3D"? well they're looking for extras for a giant lake-party scene. I already forwarded them nude pictures of Louis Fowler. Expecting to hear back any minute now.

The official plot to "Saw VI" has been released. Here's a recap (*spoilers!*) Agent Straham is dead, and Detective Hoffman is the lone successor to Jigsaw's throne. As the FBI draws closer to Hoffman, he is forced to set a game into motion, and Jigsaw's grand scheme is "finally understood". Some are speculating that the final line means this may be the last film. I can't possibly believe that, considering they're still making 30 mill a pop. The only thing I'm concerned about is I'm not seeing Julie Benz's name in the cast. Maybe she's holding out for more money? Let's hope she'll be there come this Halloween.

The guys behind the French film "Inside" have their next project, and it's called "Livid". The film is about a young girl who becomes a caretaker for an elderly woman, and decides (with a friend) to search the house at night for a purported treasure. Supernatural shenanigans ensue.

The director of the Korean horror film "Phone" is going to film a US remake... because the moviegoing public is so in to Asian horror remakes these days. Good call. 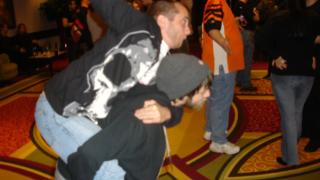