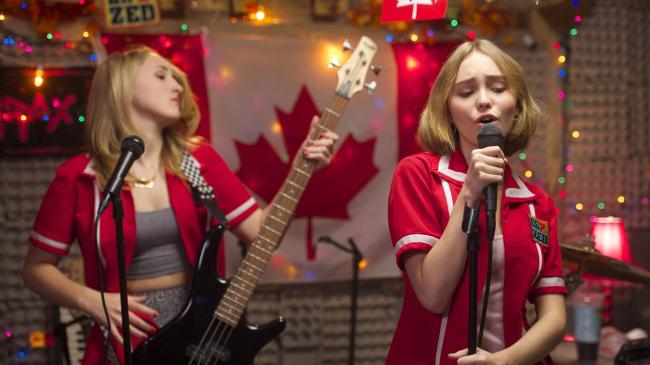 Kevin Smith’s Yoga Hosers is a butts-joke movie. Things are going in butts. Things are coming out of butts. And if nary a butt be in sight you best believe there is going to be some sort of Internet joke geared toward (or about) those pesky millenials. It’s a movie purposefully base and as Smith has stated, geared toward a particular demographic. But whether Yoga Hosers captures the attention of that  market is uncertain at best.

Set in the indifferent, product strewn neon embrace of the fictitious Manitoba-based Eh-to-Zed convenience store, Yoga Hosers picks up following the occurrences of Smith’s first entry in his “True North Trilogy”, Tusk. Colleen C (Lily-Rose Depp) and Colleen M (Harley Quinn Smith) are two clerks become heroines following the events of the previous film. Now happy jamming in the storage room at work and pulling invites to a Senior party, the pair are surprised by the emergence of tiny bratwurst shaped Nazis filled with sauerkraut. The Colleens’ find themselves embroiled in a sinister plot that soon draws the attention of legendary Canadian detective Guy LaPointe (Johnny Depp). Thus unfolds a rich mythology of Canadian Nazis, eugenics, Satanism, and immortality.

Through the layers of awkwardly placed, ill-timed jokes about tweeting and tiers of “basic-ness” there is a story here about two female friends who find a companionship stronger than the film’s antagonist. Smith and Depp have a snappy chemistry that shapes some of the film’s multitude of clunky lines into jokes that actually land. This dynamic, however, is undercut (more accurately, incinerated) with the introduction of Depp’s Guy LaPointe. Mugging and choking through lines in a frozen maple syrup inflected accent, LaPointe’s presence shifts a film from a pretty disposal popcorn flick into undecipherable navel gazing.

Yoga Hosers also suffers from an irritating mix of visual and stylistic references, producing a murky pastiche. Throughout the film, minor characters are introduced with a sort of stats screen complete with 8-bit video game font and music.  It’s the type of stylistic flourish that purposefully stalls the action to call attention to the surfaces of a film. This of course would make sense if any other part of the film had even the slightest resemblance to the era or culture referenced. That Smith continues to utilize these title cards for single scene characters makes the already stultifying technique all the more exasperating. These stylistic elements also have the unfortunate effect of recalling similar films that execute them with so much more aplomb. Edgar Wright comes to mind most frequently, as the cinematography is punctuated with close cutting and zooms accompanied by a prominent soundtrack of stuff smacking stuff. It’s a mish mash of assorted cool-culture contemporaries that can’t come close to achieving a similar tone.

The film’s shabby editing further accentuates the already exhausting stutter-stop pace. A key example of this comes in our first introduction to the Bratzis. The setup is familiar; a lone character walks outdoors alone at night. But, rather than slowly reveal or gesture toward a malevolent force in a slow build-up, Smith cuts to a medium shot of a Bratzi as if it is something we should recognize. Suspense and action moments cavalierly appear as collections of short bits from a longer sequence which may or may not elucidate what is happening.

There can be a great majesty in the crass, defiling impulse of gross-out comedy. Provided an interesting, thoughtful voice, a scene of a drag queen gobbling up dog shit suddenly becomes something artistically radical. But a movie made fundamentally “bad” in a contemporary setting must compete with, or at least acknowledge, that “badness” means something entirely different in a world full of Sci-Fi originals. You can’t lean into a high-concept joke narrative and hope it does the work for you. Smith’s explanation for his true intentions for some of the film’s narrative choices do provide a potential position for digging into his own personal psychology but it does not do the work of reconciling the film’s technical and narrative shortcomings. He may be in place where he doesn’t “give a shit anymore” but unfortunately that makes for poor viewing for audiences who are not Smith devotees.

Planet of the Vampires