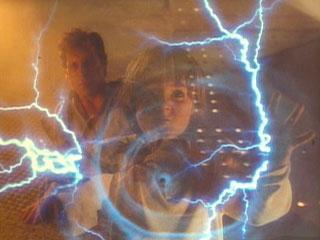 As a skinny, socially awkward child, yours truly was pretty easy to scare. It may be extremely hard to believe, but it's certainly the truth. I have a very vivid memory of waiting in line for The Haunted Mansion at Disney World, my heart racing with terror, my forehead soaked in sweat. When the doors finally open and the gaggle of suburbanites were herded inside, my parents were convinced I was on the fast track to an adolescent heart attack. Of course, I survived the ride with my hide intact, though my tender pride and dignity did take quite the lashing that summer. And the less said about my experiences with the haunted miniature golf course in Pigeon Forge, Tennessee, the better.

After revisiting Armand Mastroianni's 1988 psychic horror flick "Cameron's Closet", I came to the startling realization that I was, in fact, a lot more chicken-hearted than I care to remember. This dodgy motion picture is one of the major reasons I was terrified of dark closets in my youth, a wholly irrational fear that lingers to this day. Not surprisingly, this plodding and somewhat tiresome shocker barely registers as anything other than a dry and somewhat unpleasant cinematic fart; the very idea that something as boring and uninspired as this could scare the underpants off my skinny backside is enough to make me hang my head in shame.

The film chronicles the telekinetic adventures of Cameron (Scott Curtis), an average, everyday little boy with a decidedly extraordinary gift. When his father -- a misguided scientist who once attempted to channel his son's uncanny abilities -- is unexpectedly decapitated while hanging out in Cameron's closet in the middle of the night, the kid is forced to move in with his dysfunctional mother and her abusive boyfriend. Not surprisingly, Cameron and his mommy's new beau don't see eye-to-eye, a fact which may or may not have contributed to the poor bastard's bizarre ejection from the boy's bedroom via the second story window.

The police, of course, are baffled. How in the hell did this budding thespian manage to fly so far from the house? More importantly, what unholy powers caused the man's eyes to melt inside their respective ocular cavities? Dr. Nora Haley (Mel Harris) is the first to address the boy's peculiar powers, and quickly teams up with a physically and mentally exhausted homicide detective in order to unravel the mystery behind Cameron's abilities. However, their research soon unearths the dangerous demonic force lurking within the boy's bedroom closet.

"Cameron's Closet" is, in a word, silly. The entire films seems like a sorry excuse for a series of increasingly moronic murder set pieces, sequences that often come across as goofy and ill-conceived rather than scary and thoroughly shocking. The aforementioned demonic forces also appear to be an afterthought; their connection to the creatures lurking in the titular location are never fully explained. Wading through endless scenes of clunky dialogue and limp-wristed performances feels like a chore, especially considering the payoff isn't nearly as exciting as the box art would lead you to believe. It's a shame, really, as the premise has potential to be genuinely frightening.

If you're young, naive, and prone to bed-wetting, "Cameron's Closet" might be enough to induce several long weeks of unstoppable nightmares. The rest of us, unfortunately, won't have much to sink our gnarled teeth into. The film doesn't even work in that "so bad it's good" sort of way, due in part to the feature's pathetically generic script and its cast's lethargic approach to the material. However, it's interesting to see how far I've come as a horror fan, especially considering how much of an enormous fraidy cat I was back in the day. Then again, you still couldn't pay me enough to spend a night inside my bedroom closet. No way, no how.