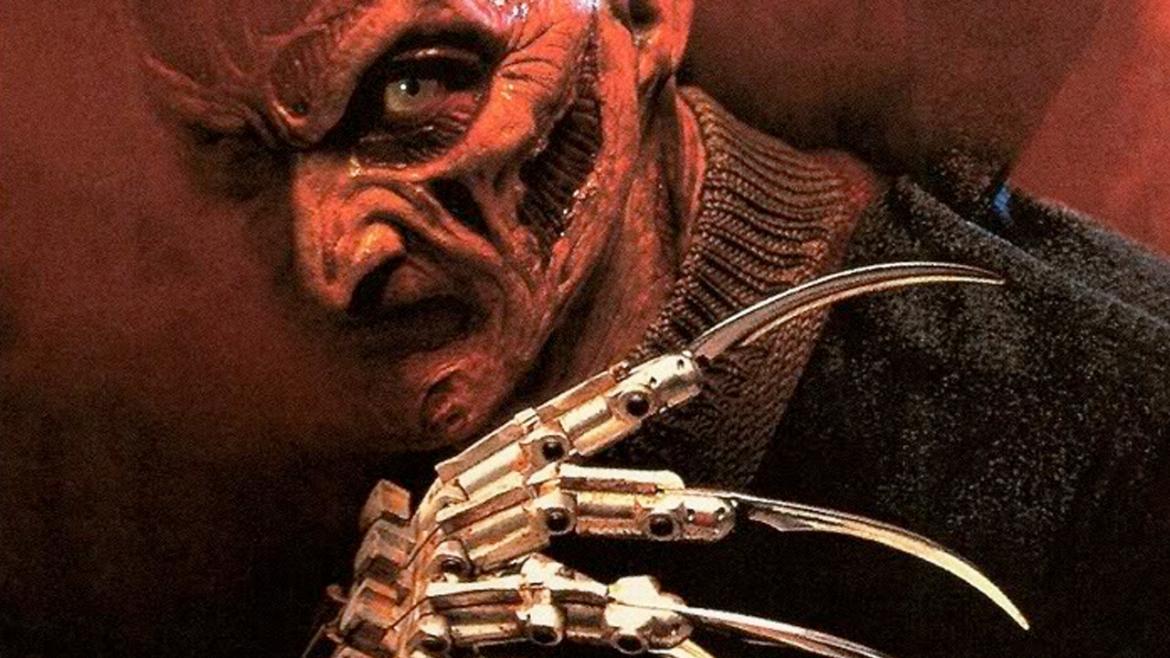 This is the seventh installment of our head-to-head review between the Nightmare on Elm Street and Friday the 13th franchises. Check out what Evan had to say about the corresponding Jason pic here!

We're still at it kids, thanks for sticking with us! After an uncharacteristically long break (you know you may be pumping these movies out too fast if three years is a “long break), the Nightmare on Elm Street franchise was back as was its creator. In a relatively short time, there had been five films to follow the original, each one grasping more frantically for what it was that kept fans coming back after the introduction of the dream-haunting menace.

As the tenth anniversary of the original film approaches, Heather Langenkamp (playing herself) is now a wife and mother who is eager to leave her final girl self behind. Though she is still acting on television, she isn’t interested in getting the gang back together, as it were. When series producer Robert Shaye calls a meeting with her to propose a new film, being penned by creator Wes Craven - who left the franchise after just one film, unhappy at the production company’s decision to drag the series on - she says no. Langenkamp, who is being plagued by scary dreams herself, as well as menacing phone calls, is not interested in getting back into the horror game. Though she and her son, Dylan, are both suffering from these nightmares, her husband remains unconvinced that anything otherworldly is going on. Once he is killed in a less than logical manner, Heather and Dylan are left to fend for themselves and find a way to take care of Freddy.

In a movie that would obviously come to serve as foundation for the genre-bending Scream film (to be released two years after New Nightmare), the subject matter lends itself to a rather meta tone. Cameos speckle the film, from Roberts Shaye and England to Wes Craven, all playing themselves, to subtler nods, like Lin Shaye as a young nurse, New Nightmare sets out to speak to the very nature of Hollywood, and it makes no effort to hide it. In a line that felt like it could have just as easily been delivered with a sneer from a certain writer/director, Robert Shaye matter-of-factly tells Heather that fans are what keep these franchises going, even when the story starts to run out. When Heather finally confronts Craven about the script he’s working on, he explains that Freddy is mearly a mask, worn by a much more ancient evil that has always existed. With the Nightmare movies, we have given that evil a form and a name, which it has grown accustomed to - a not at all subtle metaphor for Craven’s own struggle with creating this story that ran away from him, becoming something that he never intended.

With his return to the franchise, Craven did do his best to try and get back to Freddy as he had originally intended him to be. His banter is largely gone, his usual air of silliness replaced by an ominous menace. Instead of a catchy song to play during the credits sequence, the score is made up entirely of music that seeks to build a sense of dread and trepidation. The makeup, likewise, has been redesigned to make him more frightening, although it comes across looking a bit too put together. How many burn victims do you know who’s wounds are so symmetrical?

The body count is still low - with only four victims in the whole of the two hour run time - but instead of the silly individualized deaths that have become standard fare (like the comic book death in Dream Child) the deaths are all more brutal. Furthermore, for a movie that features multiple characters who design and implement special effects for a living, this movie looks like it a mock up that one might throw together in a few hours as an example. From fake looking wounds to terrible CGI, the effects are going nowhere to improve the experience of the viewer.

It is clear that Craven went into this movie with a bone to pick, and in some cases that dedication may have meant that less time went to secondary and tertiary concerns, like pacing and continuity. Characters appear and disappear throughout the movie as it suits Heather’s storyline and seems downright nonsensical in a number of places. Furthermore, while the format itself looks great on camera, getting non actors like Robert Shaye to act is clearly an endeavor that is not easily completed. Even Heather Langenkamp, who a certain group of people laud as being the ultimate final girl, struggled when simply being asked to play a version of herself.

When taken with a grain of salt, this is blast of a movie to watch. It is much more fun to watch than several of the middle films, though not necessarily any easier to follow. If you can just try to ignore how seriously Craven seems to be taking the movie, you should be fine.

Most Creative Kill: Unfortunately, fans who have become accostumed to Freddy's specialized kills are in for a disappointment, Each victim in this movie are stabbed and cut with Freddy's glove, albeit in varying venues and ways. The award has to go to the nanny's death in the hospital, which called back to the death of Tina in the first film. The set was a rotating room that allowed Julie to move around on the walls ans ceiling while being tortured by Freddy.