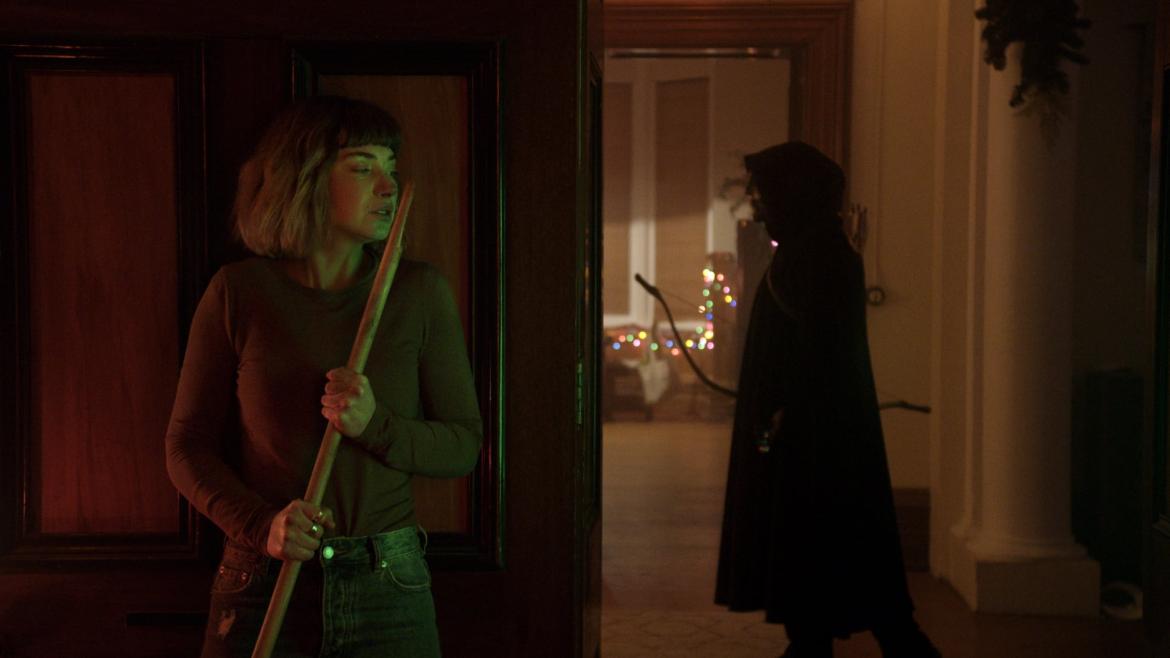 The original Black Christmas (1974) is often held up as a progenitor to the slasher subgenre. Existing prior to the final girl trope, it features an ending where the killer is not punished and is free to continue his reign of terror. (People also forget there was an honest discussion of abortion in 1974)! Black Christmas (2006) humanizes the killer, giving him a horrifically tragic backstory as we saw in movies like Halloween (2009), while gruesomely upping the body count to capture an “edgier” R-rated audience.

I lead with the previous iterations to illustrate that there is always a message behind a movie, whether it is blatant or not. In Black Christmas (2019), director Sophia Takal takes the original story and carries it into the sociopolitical climate of 2019. It is well known that the feature focuses on rape culture, misogyny, and the #metoo movement. It deals with these subjects with the subtlety of a shotgun that fires sledgehammers.

The winter break is upon the sorority sisters of Hawthorne College as some of them leave for the holidays. Riley (Imogen Poots) is harassed with disturbing text messages after she calls out her attacker in a performance at a fraternity. Together with her friend Kris (Aleyse Shannon), she must uncover and fight back against this femicidal conspiracy. The story tracks with the original for the first two thirds of the film.

I enjoyed Black Christmas most when it was not dealing with genre conventions. When the characters interacted, their conversations were relatable, and when the villains said misogynistic lines that felt a bit like moustache-twirling straw men, I remembered that these are things men actually argue/say. The characters are not archetypal perfect and Imogen Poots delivers a performance that I connected with, even though my life experience as a white cis-male viewer is not the same as her character’s.

The horror elements are the weakest link. The visuals felt recycled from horror standards like the Exorcist III (1990), with a few creative moments such as a blaze in the film’s opening sequences. The director creates an eerie atmosphere through the female gaze such as men’s looming stares and the rows of fraternity member portraits. Music is deployed in a generic manner beyond the amazing call-out song by Riki Lindholme of Garfunkel and Oates. I am glad they chose not to go with the obvious ‘Baby, It’s Cold Outside’ parody.

Unlike the mystery elements of the 1974 version we know who the killers are from the start. Mysteries with a known killer usually focus on why. We are never made to relate to our villains and their motivation is absolutely absurd on purpose. Rather than a whodunnit Black Christmas is a woman-reclaiming-her-power narrative. I was never scared for our lead, I just waited for her to overcome.

The supernatural subplot was unnecessary and, although it felt like it was a nod to toxic masculinity and learned cultural norms, it forgives some of the men’s negative actions as outside their control. This undermines the picture’s thesis. Huge swathes of dialogue are thrown out about black magic and people’s missing possessions that gave away any hint of surprise in the finale. The ending was exceedingly quick and did not leave a lasting impact.

Finally, I wish to address whether the movie should have been a standalone film without the Black Christmas (1974) intellectual property. It has obvious nods to the original, was created based on Blumhouse bringing the IP to Sophia Takal, and it is a horror movie about sororities around Christmas—it could not escape the comparisons. This movie tells a very different story from the original and if the IP got a few more people to see it, I am glad.

Overall, Black Christmas (2019) is a standard horror movie that will be judged harsher because of its association with a horror classic and perhaps more favourably because of its message. This is the true middle between the other two iterations. It’s largely inoffensive and would be an okay starter horror for the less initiated.