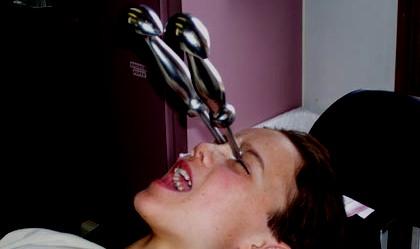 The great dickheads of cinematic history... A select fraternity that has a defined set of criteria for entry but into which precious few thespians can ever earn their way. For to be a truly unforgettable asshole the actor must walk a fine line that never dips so far into villainy that the audience, on some level, does not still have a measure of envy for his comportment. The dickhead is the bully who is never without backup, the date-rapist in waiting, the inveterate cheat, and the narcissist without moral quandary.

The greats in the field are seldom household names, but their faces are met with an instantaneous “Oh, that guy” response from film fans of almost every level. Billy Zabka, Michael Bowen, Lee Ving, Sean William Scott (if only he would realized he is incapable of being likeable) and a very few others can repeat the feat with any degree of quality. It has been a while since I saw an actor pull off a terminal jackass role with the relish and cockiness that would place him amongst the luminaries mentioned above. And let’s be clear, being an admirably direct asshole ala Billy Bob Thornton does not meet the criteria to rush this house.

The film “Asylum” is celluloid tripe; a patchwork blend of “Nightmare on Elm St. 2” and “Bad Dreams” with a “Final Destination” cast. The basic story here is that a new crop of feckless frosh move into a state-of-the-art dorm on the campus of Richard Miller University (which has to be a masturbation joke). Lo and behold the dorm is more than a password protected Petri-dish for bacterial meningitis and the clap, it’s a refurbished loony bin. Of course, it wasn’t run by well-meaning, but under-scientific doctors of yore, rather it was a laboratory for a madman. The forgettable faction of freshmen breach the older, closed down section of the building; release the spirit of the mad doctor and a flurry of neuroses specific deaths are unleashed upon the group.

The lone dependable bright spot in “Asylum” is Travis Van Winkle. He is not yet at the level of the legendary dickheads but if he can keep up the momentum gathered by this performance and his turn in the “Friday the 13th” remake, he may get there. Now mind you, this is not a nod to his vast ability, which is put to the test when director David R. Ellis tries to humanize his character, but rather it is an attempt to discover a crack of light in an otherwise glossy vacuum-sealed bag of commonplace crap. Van Winkle is set free at the beginning and his quick retorts are much more amusing than they should be. He’s the kind of guy that you just can’t fathom could be any different off-screen than on.

Unfortunately, nothing else in “Asylum” gets a passing grade or survives Ellis’ "hazing by boredom" approach to the horror content. This comes as a minor surprise because Ellis is responsible for the unreasonable fun that was “Final Destination 2”. Sadly, “Asylum” does not feature the greatest traffic accident sequence ever filmed. It doesn’t even feature the greatest lip amputation scene ever filmed, being beaten out by the only other film I can think that attempts that feat on camera, Douglas Buck’s “Cutting Moments”.

The mind is an involuntary editor, slicing free and jettisoning much of the crap that holds no importance to our existence. After watching “Asylum” I wrote down all my impressions. Upon sitting down to write my review 4 days later I found that I’d misplaced my notes. To my chagrin, I actually had to scan through the film again to remember what transpired. Even the synopsis on IMDB could not help me reformulate the pictures and impressions in my head. Maybe my poor brain is screaming for more fish oil, but the fact remains that this film has no defining moments of gore, story, nudity, performance or anything else to trigger the formation of lasting memories. Свежие фильм, много новинок

If you must watch “Asylum” my recommendation is that you fashion some sort of drinking game that involves imbibing every time you are taken out of the action by a performance issue. This should ensure that you are either sick or unconscious by the 20th minute of the film. If you’re blacked out, you will be better for having missed the movie. If you’re chinning the porcelain, you should be able to make it back from the bathroom by the time the killing sees full flower (roughly the 35 minute mark). If you can’t use depressants or stimulants to get you through the film then focus on Van Winkle. His performance isn’t cool as ice, nor will it put you to sleep, but you might be watching an actor who is on his way to the Richard Cranium Hall o’ Fame.