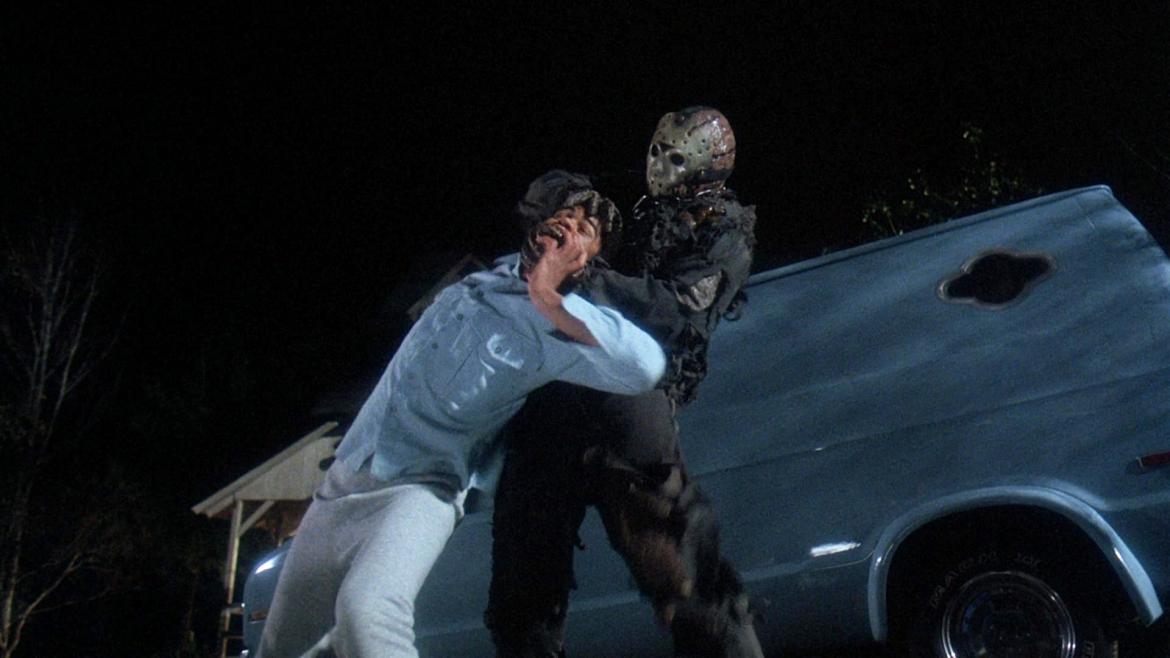 This is the seventh installment of our head-to-head review of the A Nightmare on Elm Street and Friday the 13th franchises. Check out what Sophie had to say about the corresponding Freddy pic here!

The interesting aspect to the seventh iteration of Friday the 13th is the marker it symbolizes for the franchise. It took six films to fully understand what works for the summer slasher; his look, his killing methods, and ultimately how audiences reacted to him as a horror icon. With part six living on as one of the more solid entries in the franchise, part seven seemed to feel that it could take all of those successful aspects of the previous films and move them in any direction desired. Looking at the era of horror that part seven Jason was walking into, the world of the supernatural was becoming more commercial and popularized in horror. Hellraiser and Evil Dead II, while not being completely supernatural, had more elements of the demonic approach than other films of their time. Moreover, the most successful Freddy film at that time, A Nightmare on Elm Street 3: Dream Warriors, had teens that not only fought back but also did it with superhero-esque powers. What better way to refresh Jason than with an adversary of the psychic persuasion. Friday the 13th Part VII: The New Blood takes the elements of the teen slasher and mixes it with the creativity of the more trendy horror of the time. While this combo should have created a fantastic and balls to the wall outing for audiences, the film lacks the humor and guts it so richly deserves to be a standout in the franchise.

Previously on Friday the 13th, Jason has been defeated by his nemesis Tommy. Resting on the bottom of Crystal Lake with a chain strapped firmly around his neck, Jason has allowed the fishes and undersea elements to chip slowly away at his already decaying exterior. Years before Jason became fish food, a young girl named Tina has fled to the lake right outside of her camp getaway in order to show just how angry she is with her abusive father. Conjuring up all of the mental power she holds, young Tina tears down the dock her father stands on delivering him to a watery grave. Back in the same time period as fishfood Jason, Tina (Lar-Park Lincoln) has returned to her lakeside home with her mother and therapist in order to put an end to the internal struggle she feels with the death of her father. A group of teens residing nearby are also along for the summertime fun, including hunky dreamboat Nick (Kevin Blair) who falls instantly for Tina. After a run in with her therapist, Tina once again stirs up the lake with her mental prowess, this time breaking Jason's chains and allowing him to emerge ready for new blood. As Jason continues his formula of killing teen after teen, psychic Tina stands in his way ready to show him an adversary that won't be as easy to take down.

What works well for this iteration is Jason himself. More specifically, part seven was the first film to feature the actor Kane Hodder as Jason Voorhees. The physicality of Hodder seems to be the most fitting for how far Jason has come since his days as a mongoloid. Jason has always had an unparalleled level of strength. Even as a child jumping out of the lake to grab Alice takes some serious leg work. However, upon dying at the hands of Tommy to then be resurrected (by Tommy as well) gave Jason even more strength of the zombie variety. Hodder's Jason has the ability to pick up a teen and slam them repeatedly against a tree as a killing blow. While there weren't as many deaths as previous iterations, the means were much more brutal and depicted just how far Jason had come since part two. The continuity of his look was done extremely well here with previous wounds still inflicted on him and the addition of water deterioration. Sadly the praise ends there as the rest of the film falls flat, especially with such a campy premise ready to be exploited. Tina is a psychic which is utlizied often but not to the degree that it should have been. When she eventually goes mind to mind with Jason she only does a few cutesy attacks against him, including one that rips off his mask. The rest of the time Tina whines and broods over her abilities while the other teens perform the typical sex and drug activities. The only moment that truly took the right direction was at the point when a decapitated head in a potted plant is psychically thrown at Jason's head. A decapitated headbutt is the kind of camp that this film was meant to harness. Along with the flatlining was another ending that leaves so many questions and lapses in logic up for debate. The seemingly non-decayed body of Tina's father saves the day by pulling Jason back into the lake. How the father was alive and why he does not look even slightly decayed is a jump the shark moment to be sure.

Overall Friday the 13th Part VII: The New Blood didn't take its core concept in the right direction. While not the worst in the series it just seems to be arguably the most disappointing as it did not capture the potential it held.

Most Creative Kill: As mentioned above, Jason utilized one of the most iconic camping tools for his killing pleasure: the sleeping bag. Poor Judy, she was just trying to get some rest on her summer break, but Jason decided to bash her against a tree instead. Perhaps he decided there would be less clean up this way.

Movies Like Friday the 13th Part VII: The New Blood