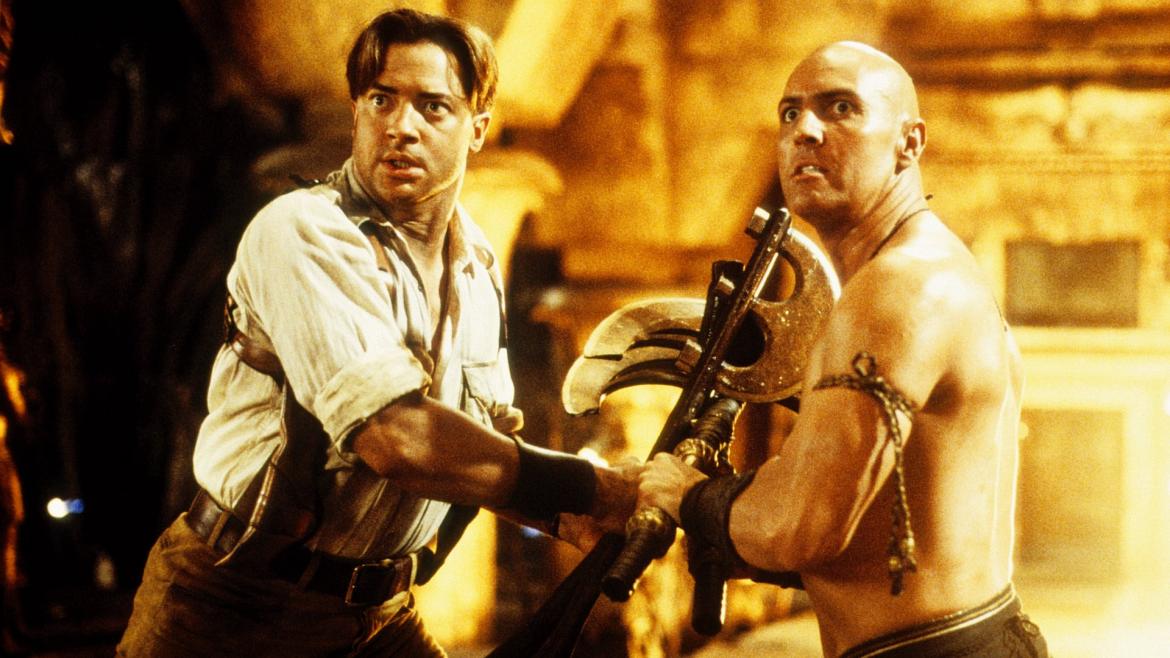 In 1999 Stephen Sommers managed to deliver a genuinely surprising and enjoyable summer blockbuster adventure rising above the typical backhanded compliment of being a guilty pleasure. Returning in 2001 the filmmaker tried to match that success by essentially duplicating what made the original so fun, but skimping on the character building. In the process The Mummy Returns' legacy is tied to a clunky rehash with the same dated special effects while maintaining its sense of charm and fun.

Sommers this time introduces the sought after bracelet belonging to The Scorpion King (Dwayne 'The Rock' Johnson) who once commanded the powerful army of Anubis before having his soul taken by the god once he conquered Egypt. Fast forward to 1933 where Rick (Brendan Fraser), now married to Evelyn (Rachel Weisz) continue their exploring ways with their 8-year old son Alex (Freddie Boath). The family uncover the Scorpion King's powerful bracelet which becomes locked on Alex's wrist. They soon find themselves targeted by a society that has resurrected the evil priest Imhotep (Arnold Vosloo) once again, planning to use the bracelet to carry out his dastardly deeds.

The Mummy Returns hits a lot of the same beats as The Mummy. It presents the same big bad, Imhotep, wanting to again resurrect the love of his life and take over the world. The only difference this time is the looming threat of the Scorpion King who must be killed. Whoever carries out the task can either command the Army of Anubis or send them back to the underworld. Again we see variations in the special effects that dominated the original which include Imhotep's undead soldiers running loose in London, and instead of a wall of sand swallowing an escaping plane, it's a wall of water swallowing up Rick and his buddy's latest conveyance, a high-powered blimp. Like all of the effects that came before it, time has not been entirely kind. Particularly, the film's last act when The Scorpion King finally appears as a giant human/scorpion and an entirely CGI recreated Dwayne Johnson.

The sequel is at its best when focusing on the dynamic between its leads and specifically the chemistry between Fraser and Weisz. The original's dark Looney Tunes comedic vibe is somewhat muted this time around, but present enough to carry the film through without ever becoming dull. Still, there isn't quite the same balance of comedy, character work, and silly action.

The Mummy Returns, like many sequels before it, employs the more is more approach. While it delivers more of the eye-candy it loses the special ingredient that made the original so endlessly charming. In the end, Fraser's square-jawed charisma and Weisz's enchanting presence are more than enough to give this sequel a spin, but it's a far cry from the original's endearing legacy.