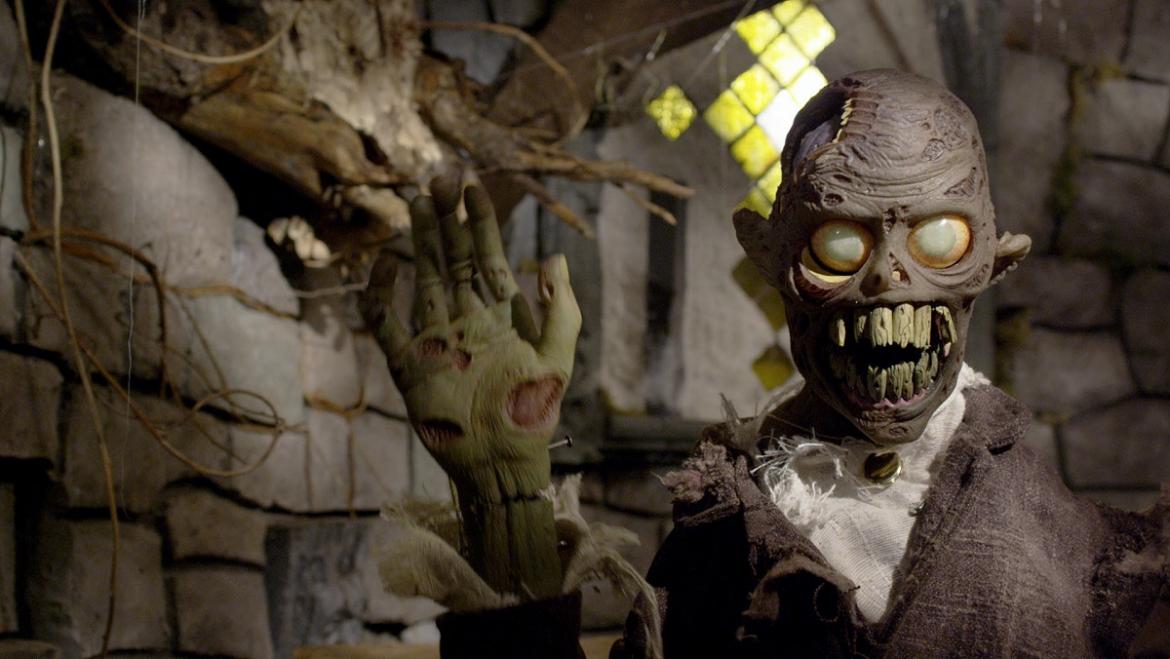 Jesse Blanchard’s passion project Frank & Zed, is inspired by the likes of Jim Hensen and a love for classic universal monsters. Horror by way of puppets. The question though is whether or not the technical achievement amounts to a worthwhile cinematic experience, or is it merely a gimmick?

Long, long ago a peaceful village came under siege by a powerful wizard who was vanquished when the King summoned the help of a demon who then bestowed a curse on the royal bloodline. The attack also left two of the wizards servants, Frank and Zed, to fend for themselves in solitude. 200 years later the last of the royal bloodline is threatened and the village's Lord Regent deliberately tempts the curse by sending villagers into the woods where they are then killed by Frank who mistakes them as threats and subsequently feeds them to Zed. Convinced that killing the two monsters is the only way to avoid their fate, the villagers gather arms and storm the remnants of the castle Frank and Zed call home.

One cannot deny the technical achievement, painstaking detail and craftsmanship behind Frank & Zed. The project was stretched out across 7 years and a pair of crowdfunding campaigns to make it in front of an audience and for that Blanchard and his team deserve every ounce of congratulatory praise and celebrating they’ve got coming to them. The question of course was whether or not this is all just a gimmick and I’m here to tell you, no. There is real merit to the work being done here even if it is a tad rough around the edges. Still, as with anything you’ve got to start somewhere and I’m only optimistic about the work Blanchard and the Puppetcore brand has in store moving forward.

Frank & Zed is a low budget affair, which makes the puppetry and composition of this vision as a whole that much more impressive. The sets are small and intimate, but the editing and artistry of the scenery and b-roll give this a much more expansive look and feel. It’s part fantasy epic and part gory fairy tale that’s anchored by the heartfelt friendship between the titular characters.

These lead characters have beautifully realized character designs. Frank and Zed are distinctly different in look in that they are more animatronic driven than the entirety of the characters making up the villagers who have a more straightforward Hanson-esque hand puppet appeal. If you stick around through the credits you actually get some delightful behind the scenes footage of the filming process which enhances the appreciation for this type of craft.

With Frank and Zed being the standouts in design, so too do they provide the anchor in Blanchard’s script. There are two storylines on a collision course; the lovable duo more less doing their own thing to survive and the villagers who are trying to ward off an ancient curse. The latter features some muddled storytelling which borders on incomprehensible at times, yet the humor helps to keep it from being grating. Furthermore, the sheer number of characters and moving parts in much of the villager focused scenes becomes chaotic to the senses.

This all comes to a head and the chaos shoots through the roof during the last 30 minutes. Throughout the film we are teased by an “Orgy of Blood” prophecy and Blanchard really lets loose a cacophony of puppet violence and blood splattering. It’s a lot to take in, but it’s also sure to put a grin on every genre fan’s face.
Frank & Zed is a delightful bit of gory puppet mayhem with a tremendous heart at its core. Blanchard’s passion project hints at a burgeoning and fascinating career in a unique medium within the genre, waiting for audiences to latch on.