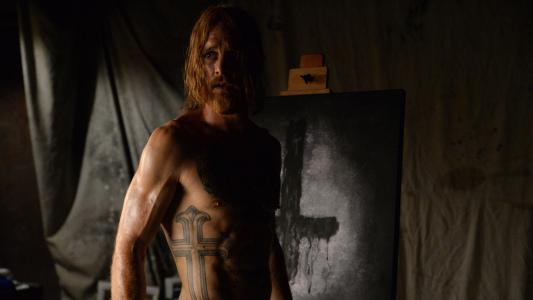 It's been five long years since Sean Byrne graced us with the near masterpiece that was, The Loved Ones--eight years if you count the lengthy festival run. That's a long time to be twiddling our thumbs waiting to see what the filmmaker would do next. With the release of The Devil's Candy (in select theaters and VOD March 17, 2017) the wait is finally over as Byrne unleashes his totally metal and satanic sophmore effort upon the world.

Toiling heavily in dual storylines on a collision course. There's Ray (Pruitt Taylor Vince), mentally under-developed and armed with a rad guitar, shredding a single chord over and over to drown out the devilish growls speaking to him to do terrible things. Then there's Jesse (Ethan Embry), who has recently moved his wife, Astrid (Shiri Appleby), and daughter, Zooey (Kiara Glasco), into Ray's old house after a shady Texas realtor underplays the horror that uprooted the previous tenants. Jesse soon comes under the trance of the demonic forces in his own way--a struggling painter who finds disturbing visions flowing through him and onto the canvas. When Ray comes knocking looking to move back home where he can play his guitar nice and loud he's sent packing, but the voices in Ray's head now have an eye for Zooey and Jesse's painting foretells horror ahead for the family.

The Devil's Candy finds Bryne trying to shake out the cobwebs. Thematically, his film doesn't skip a beat--weaving foreboding death metal lyrics at opportune times and simultaneously adding depth to the experience. However, the film is lacking a viciousness that permeated the screen in The Loved Ones. The heavy metal backbone picks up the ball where the narrative simply can't/won't and provides the film with some much needed energy. The relationships between Jesse, Astrid and Zooey drive much of the plot, but without much in the way of legitimate story. The family element simply injects the emotion into the dread created when Ray sets his sights on Zooey. From there it's just a matter of when and where the bad stuff will go down.

Building foundation within the characters is an aspect of filmmaking that Byrne obviously believes in. He finds thematic tension within his two unwilling satanic conduits. We watch as Ray battles his demons unsuccessfully, but instead of being a vessel of hatred he's a sympathetic figure that simply needs to be stopped for his and everyone else's own good. Jesse's arc is that of an artist struggling to find their voice and the forces simply let the art flow through him even as it disturbs him. Jesse's arc introduces us to a seedy art studio with a mystery all its own that could have used a little more fleshing out to have more of an impact. Byrne's eye for symbolism is just as sharp as ever, blending in some visually striking images along the way--including multiple shots of Ray lumbering in on the other side of a red crucifix on the front door of the house making him appear as if he is the embodiment of the devil stomping towards his prey.

Everything leads to a fiery finale that is a show stopper conceptually, but clunks its way to the screen visually in a serviceable if unsatisfying way. Byrne's second feature plays a much more patient game than his debut and his writing lets the scenes breathe organically and allows the performances (not a weak link in the bunch) to do all the heavy work. The Devil's Candy is a sweet treat for those jonesin' for more occult shenanigans, but finishes with a small yet sour center that's sure to pucker the enjoyment for some. Byrne, like a man possessed, came back from his extended absence by brushing off the dust with a Gibson Flying V; proving that when the devil comes callin' just blast some sick riffs and turn the amp to eleven.