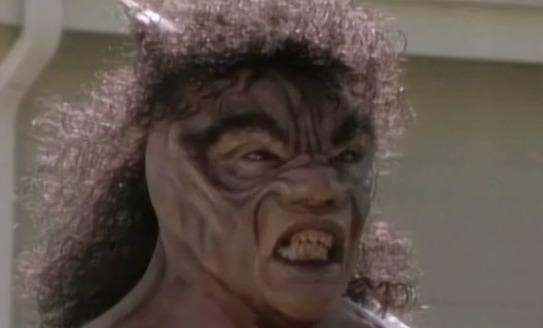 According to Internet Movie Database, it took no less than three directors -- including B-movie veteran Fred Olen Ray -- to piece together the remarkably incoherent mess that is "Demon Cop". Woeful in almost every way imaginable, the film attempts to chronicle the struggles of a former parole officer who, through circumstances which remain unclear, becomes infected with a curious disease that "makes AIDS look like the common cold". The bizarre illness frequently transforms him into a blood-thirsty killing machine hell-bent on eliminating the swarm of villainous gang bangers who have seized the streets of Aurora, Illinois. He's also a chick magnet who isn't afraid to share his emotions, a rarity in those possessed by demonic forces.

However, the title "Demon Cop" is a bit of a misnomer, as Edward Thurman is neither a demon nor a cop, traditionally speaking. Sure, he's a former parole officer with an absolute hatred for gang violence, but that hardly qualifies him as a full-on, card-carrying "cop". And while he may be possessed by strange otherworldly forces beyond our comprehension, Edward's symptoms are actually more in line with your garden variety werewolf or shapeshifter than anything else. The moniker may sound intriguing, but it's misleading, and doesn't being to describe the utter cinematic lunacy contained within the film itself. Of course, "Vengeful Shapeshifting Parole Officer " or "Seriously Infected Authority Figure" just doesn't have the same punch.

"Demon Cop" is an admittedly hard film to follow. There are so many poorly-developed characters and explicitly stupid subplots crammed into this slipshod production that you may find yourself scrawling the specifics on the back of your hand. In addition to the aforementioned man-creature with the violent aversion to inner city turmoil, the audience is also subjected to the following: a crippled psychic with too much time on her hands; a disc jockey who doesn’t take crap from rude European callers; a pair of police officers who are more concerned with missed vacation time than solving murders; an Interpol agent with a penchant for hand-held tape recorders; a wonky subplot involving Nazi experimentation. Most of these avenues are never fully explored, so leave room in your pocket for plenty of unanswered questions.

Oddly, the film is book-ended by a pair of dodgy segments featuring Cameron Mitchell as a slightly off-putting psychiatrist, a wholly unpleasant fellow who puffs away on a cigarette while dispensing unintelligible nonsense about mental illness, Edgar Allen Poe, and the horrors of working with unstable patients. The sequences are not unlike Bela Lugosi's cameo in Ed Wood's cult classic "Glen or Glenda", and are met with similar results. It's certainly an unusual way to open the feature, especially considering Edward Thurman isn't delusional, deranged, or disturbed. The poor guy's possessed by a gang-busting were-demon-thingie, for crying out loud. That hardly makes him a candidate for a straight jacket and a lobotomy.

Regarding performances, I won't waste too much time discussing them -- the less said, the better. There's nary a moment to be found when someone isn't stumbling over their lines or reacting poorly to the titular character's demonic shenanigans. Granted, the script is garbage, and the dialogue they're given to regurgitate appears to have been inspired by supermarket mystery novels and daytime soap operas, but they could've at least attempted to have fun with it. The finished product would've been drastically different had the cast come equipped with a sense of humor. Then again, maybe I missed the point, and the joke's on me. It certainly wouldn't be the first time.

Despite the incredibly low score, "Demon Cop" is a proud member of my embarrassingly exhaustive DVD collection. And while it isn't as weirdly entertaining as, say, "Samurai Cop", "Deadly Prey", or Tommy Wiseau's immortal classic "The Room", it's certainly worth investigating if you're into this sort of thing. Most people aren't, and that's perfectly okay. Even hardcore fans of Z-grade cinema may have an extremely hard time finding a place in their misshapen hearts for a movie about a vengeful demon with a wackass late-80's Jheri Curl. However, if that sentence is among the best you've read all week, there may be hope for you after all. Give "Demon Cop" a chance. Make me proud.