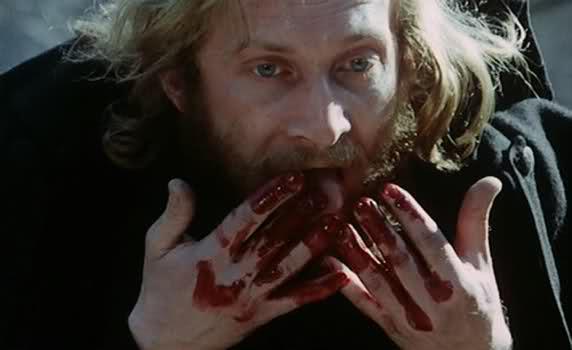 Andrzej Zulawski's "Possession," of which I am a huge fan, is finally getting a Blu-ray release at the end of July this year, so I thought it would be fun to take the time to check out another of Zulawski's horror films "Diabel." The movie opens when an unnamed stranger (presumably the Devil) rescues a young soldier named Jakub from imprisonment. The Devil then sends Jakub out into the world to see how it has changed during the war, while Jakub was in prison.

What Jakub finds drives him insane: His father committed suicide several weeks ago, but no one will bury him, his sister is married to an abusive brother he did not know that they had, his mother is now a prostitute (and for whatever reason he did not tell her that he was her son until she was naked and on top of him), his fiance has married his friend, and for whatever reason there are sexually deviant circus performers roaming the countryside. The majority of the movie is simply Jakub going from one one horrible discovery to the next while the Devil pops in and out, sometimes rescuing Jakub, and sometimes simply just antagonizing him. After Jakub is driven mad, the Devil encourages him to punish everyone for their moral crimes, and then Jakub kills practically everyone he comes into contact with a straight-razor.

For anyone who has seen "Possession" the style of "Diabel" is very similar. Zulawski creates a sense of frantic energy, or anxiety, like no other director I have ever seen. The cameraman often chases after characters who are often running, fighting, rolling along the ground, or simply flailing their bodies around as spastically as they can. The opening scene of the film is especially strong as the Devil darts in and out of rooms of a monastery/prison while nuns and soldiers in the background of each shot, run around or flail about, while they are screaming and often covered in blood. Zulawski complements his unique camera-work with an incredibly bizarre soundtrack of jaw-harps, psychedelic rock, and a whole host of bizarre sounds and noises that I couldn't even begin to identify.

Unfortunately the movie begins to lose steam about half-way through and there seems to be much less emphasis placed on the presentation of each scene. I can only imagine this movie was so low-budget that they became too pressed for time to give the second half the level of care the first received. As a result "Diabel" really suffers, and what I think could have been a cult-classic is only a curiosity at best. Another one of the bigger problems with "Diabel" is that it's story is so esoteric that it probably won't mean anything to people living outside of Poland at the time it was made. In that respect the film reminded me quite a bit of the much more recent movie, "The Last Circus" which was also a bizarre commentary on a war that foreign audiences will have no understanding of. However in that film's case, "The Last Circus" is much more engrossing from start to finish, so the audience doesn't really need to know what everything in the film represents to enjoy it.

There are a lot of complex ideas floating around in this movie and the Devil and Jakub deliver speeches to each other that are so hard to understand that I think you would have to give this film two or three watches to get a real sense of what is going on. Normally I wouldn't have any problem with a movie being that complicated, and I've seen several movies that are complex enough that they practically demand multiple viewings, but unfortunately the quality of this movie isn't strong enough to warrant watching more than once. I suppose this is an art-film more than anything else, but the characters spend so much time rolling around and flailing their bodies about that it is pretty hard to take seriously. For instance at one point Jakub becomes so disillusioned that he asks the Devil if life is still beautiful. The Devil responds that "Life is beautiful but that I can only explain it by dancing," and then the Devil flails his arms and legs around as fast as he can and then flops around on the ground. I have no idea if this is supposed to be a joke or simply some sort of statement about the absurdity of life, but in any event, it is hard to imagine that there is a really deep meaning to a lot of it.

The most interesting thing about "Diabel" for me, was that it puts you in the shoes of someone who failed to attempt a coup d'etat. This is a perspective I'd never even thought about before, let alone seen in a movie. The troubles of soldiers returning home from war have been well documented a whole host of movies, however I've never seen a movie where the solider returning from war was an enemy in his own country. The sense of alienation Jakub feels as a returning solider, is heightened to an astonishing degree because many of the people he is returning to absolutely hate him for what he has done.

I'm not sure I would recommend "Diabel" to anyone but the most hardcore cinephiles. However, for anyone who is considering making films I believe there is a lot that can be learned from Zulawski's style as far as camera movement and sound. I feel like the techniques he uses to create atmosphere are incredibly effective as well as being tricks that wouldn't necessarily cost much money whatsoever.

The Lords of Salem