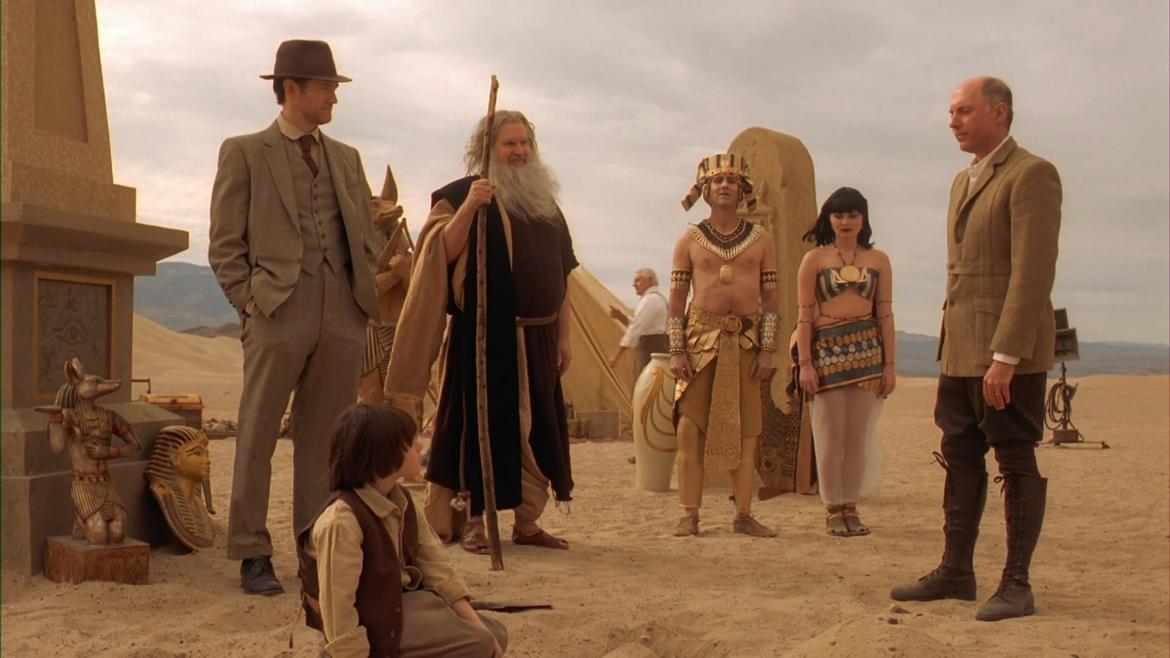 I have no idea why people continually talk smack about the good people over at the Sci-Fi Channel and their constant string of original movies. Sure, they may be very cheap and often amateurish, but they are also consistently entertaining. Often times, they are even better than what’s currently playing, genre wise, in the theater. In the past few weeks, I’ve enjoyed movies like "Alien Lockdown", "Chupacabra: Dark Seas" and "Reign of the Gargoyles". What has the cinema given me? Some shitty J-horror remake starring the block of wood formerly known as Jessica Alba. You know I am right.

There is more creativity, ingenuity and downright forceful attempts to entertain you, the genre fan in a single one of these Sci-Fi flicks, but all you do is constantly shit all over their efforts. Enjoy that screening of "Cloverfield" all you want, but the only giant monsters I want to see are snowbound spiders chasing a former "Melrose Place" star down a pack of fresh powder. I’m a purist in that way.

The latest to get the DVD treatment is the utterly fun "Sands of Oblivion", starring an immobile George Kennedy along with Adam Baldwin and Morena Baccarin (a reunion all you “browncoats” can jerk off to). Sadly, my favorite movie star of all time, Casper Van Dien does not make an appearance, so I was mildly disappointed in that respect, but otherwise, I had a great time.

When Cecil B. DeMille — he was a bit before your time — made his legendary 1923 film "The Ten Commandments", he used real sets and artifacts from an ancient evil inverted pyramid that came complete with its own half-man, half-dog god that killed random crew members is such inventive ways as becoming a giant cobra made of sand. Now whether this is historically accurate or not is up in the air, but for the sake of SANDS OF OBLIVION, let’s pretend it did. It’s easier that way.

Eighty or so years later, the Egyptian god is resurrected by George Kennedy and his son, an Iraqi War vet. Why is really not that important, but a crew of college archaeological students get swept up in the mess, as at the same time they are digging out the movie set remains that DeMille buried to keep the evil away. He was being pro-active. Pretty soon, their teachers, led by Baldwin and Baccarin, are witness to all types of accursed goings-on, such as hundreds of CGI scorpions attacking a guy driving a bulldozer who, in the midst of all the chaos, inadvertently decapitates a student.

Did I mention that George Kennedy also gets his arm ripped off? Because he does.

After Baldwin gets possessed by the Egyptian god-thing, it’s up to Baccarin and the Iraqi vet to send the thing back down to the Egyptian underworld (I’m sure it has a name, but there’s really no way I’m going to look it up) with the help of a survivalist redneck who, of all the survivalist rednecks I’ve ever seen in movies, is the most affable. You kind of want to hug him after he, in a saint-like gesture of generosity, lets our heroes not only take a cache of weapons, including a rocket launcher and a case of phosphorus grenades, but also lends them his sweet dune buggies. If only all white-separatist, obviously insane, end-time militia nuts could be so giving… we might actually be able to make this a better world.

The final battle is a showdown for the ages when the phosphorus grenades — about which the Iraqi war vet brags burn at “5000 degrees” - and that he “hopes” she “brought her sunscreen”, explode in a ball of flame akin to that of a drunken redneck filming himself throwing a small canister of gasoline on a campfire, setting his shirt kinda on fire and then promptly putting it on YouTube, i.e., comically disappointing, yet still resulting in minor burns.

As far as the acting goes, Adam Baldwin is a big lump of clay and I do want to say that Morena Baccarin is “cute” or “foxy”, but she also really looks like my mother (when she was younger, of course), so I am going to skip that entirely. But the real star is the highly effective rotting dog-man God-thing, the best creature that these guys have come up with yet. Someone paid attention at the Tom Savini School of Make-up!

"Sands of Oblivion" is a pressurized blast of fun that only cements my love of these Sci-Fi Channel Originals. So c’mon assholes — can we please stop the hating and start the appreciating?