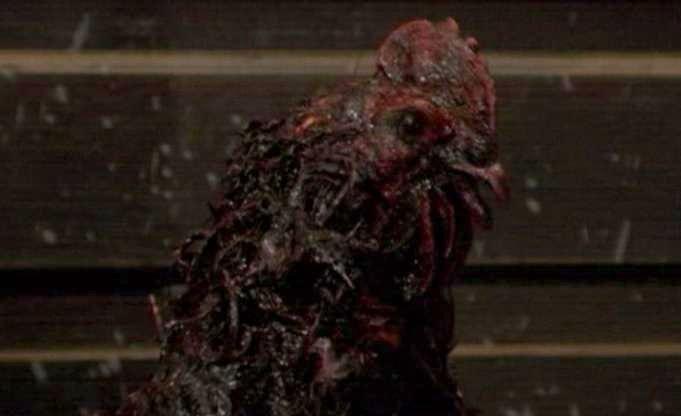 Generally speaking, when it comes to horror movies, I'm pretty easy to please. The picture in question doesn't have to be polished, accomplished, intelligent, or even coherent -- as long as the director delivers a film that's entertaining and a little bloody, chances are I'll walk away from the experience with a crooked smile on my misshapen face. A sense of humor and a tongue placed firmly in cheek goes a very long way with me, even if your atrocious backyard production is tore up from the floor up.

Writer/director Sam Drog's ambitious 2006 low-budget zombie epic "Zombeak", while not the most accomplished slice of celluloid to ever grace my television set, scores a free pass simply because it features a zombie chicken fueled by the unholy powers of Satan. A zombie chicken, you ask? Yes, a zombie chicken, one that thoroughly enjoys violently ripping the eyes out of any foul-mouthed redneck within pecking distance It's not everyday you encounter a motion picture that attempts to combine comedy, Satanism, gore, and poultry. Lloyd Kaufman's "Poultrygeist" notwithstanding.

Here's the setup: A curvy waitress with a wicked case of potty mouth is kidnapped by a rabble of bumbling cultists who wish to utilize the poor lass in their ambitious attempt to bring Satan back into the mortal plane. Their plans, however, are soon derailed by the girl's hillbilly boyfriend, a hot-tempered police officer, and the dimwitted manager of Cooters, the restaurant from which our heroine was abducted. Displeased that his long-awaited comeback has ended before it really began, an extremely angry Satan decides to inhabit the savaged corpse of a sacrificial fowl used in the ritual. As one character cleverly pontificates, pure evil does, in fact, taste a lot like chicken.

"Zombeak", as you may already have guessed, is a lot more fun than most productions operating at this level. The acting is grating, the script is seasoned with gratuitously naughty dialogue, and the computer-generated effects appear to have been crafted using a Commodore 64 and a copy of Doodle. That being said, Drog does an absolutely fantastic job of making all of these wonky elements work in tandem, and the end result is as deliriously enjoyable as anything released by Troma and its brethren. Naturally, a predisposition towards campy cinema is essential to one's own personal satisfaction. If I hadn't abandoned my pride years ago, I'd be thoroughly embarrassed by this risky admission.

Sadly, it takes the picture roughly 20 to 30 minutes to get to the good stuff. And while this isn't necessarily a huge problem, it is a tad disappointing considering the movie is only 70 minutes long. Of course, I'm really not complaining, as the latter half of the feature is stuffed with an odd assortment of icky, blood-soaked tomfoolery. Watching the film's titular creature peck maniacally at the faces of its adversaries never gets old, even when the performances and dodgy effects threaten to defecate wildly all over your cinematic merriment. However, the neverending stream of one-liners, combined with the inherent goofiness of the premise, somehow manages to keep this slipshod production from completely falling apart.

Is "Zombeak" an entertaining experience? Definitely. Is it a good movie? That reallys depends on your definition of a "good movie". When you purposely sit down to watch a flick called "Zombeak", you're not looking for high art. You're just looking for some zombie chicken carnage, plain and simple. The film certainly has its fair share of problems, and if the promised sequel gets off the ground, I will be pleasantly surprised. But when all is said and done, Sam Drog and his dedicated cast delivered 70 hilarious minutes worth of gory fun with reckless abandon, and that's really all that matters. Highly recommended if you have no taste whatsoever.