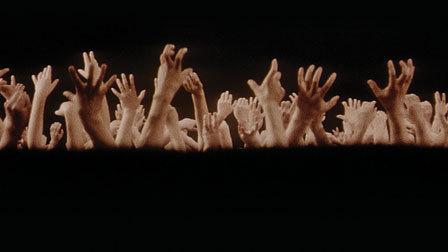 “Jigoku” is both an incredible and truly bizarre film. The director of the movie, Nobuo Nakagawa, made 97 films over the course of his career, which is an ungodly large number by American standards (only two other of his films are easily available in the States, i.e. "The Ghost Story of Yotsuya" and "Snake Woman’s Curse"). If you think of a current director like Quentin Tarantino maybe making one movie every four years, many Japanese directors at the time, were making four or more movies every single year. The reason I point this out is because this movie is a true masterpiece of classic Japanese film-making, and also because it is so incredibly strange that if anything had been just a little bit off, this movie probably would have been forgotten right along with Nakagawa's other 90-plus films that people can't or don't watch. “Jigoku” is different though. This film is such a weird masterwork that I’m honestly not surprised it took one man 97 tries to produce one movie this unique and memorable.

The film follows the story of Shiro, a young theology student who is engaged to be married, and Tamura a character that keeps appearing out of thin air to lead Shiro down a cursed path into Hell itself. Tamura offers Shiro a ride home from his fiance's house and as Tamura drives he runs over a drunken gangster walking in the street. He claims that the "Yakuza" jumped out in front of him, but the way it is presented it is very possible he ran him down on purpose. Shiro is distraught and begs Tamura to stop the car, but he refuses. Shiro is plagued by guilt and decides to go with his fiancé to the police station and confess, but they have a wreck on the way there and the fiancé and her unborn child are killed.

Later on Shiro receives word that his mother is dying and he heads out to the country-side to visit her. She is staying in a hospital while her husband is sleeping in the next room with his mistress. The mistress keeps throwing herself at Shiro and begging to go back and stay with him in Tokyo. Shiro soon becomes infatuated with a young girl who is staying at the hospital and is played by the same actress that played his fiancé, who he later finds out is his sister. Meanwhile the doctor of the hospital is trying to save money by knowingly buying diseased fish from a fisherman, and these end up killing everyone who eats them. Shiro gets into a fight with Tamura and kills him, the parents of his dead fiancé throw themselves in front of a train, and the mother of the dead gangster comes to the hospital and poisons everyone this is else with tainted sake, and then chokes Shiro to death. Basically everyone in the film dies within a few minutes.

Afterwards every character descends into Hell where they are tortured in a stream of consciousness fashion, randomly going from one torment to another. Characters are boiled, flayed, turned into skeletons, forced to march into rivers of pus, their teeth are smashed out and limbs severed by demons, they’re buried, they walk on spikes, and in one of the more striking scenes all the citizens of hell are spun endlessly in a giant circle.

The imagery here is both haunting and beautiful. Most noticeable is Nakagawa’s use of vivid and contrasting colors, that are very reminiscent of the style of Mario Bava, although “Jigoku” predates Bava’s well known color films by a few years. These scenes are so striking that “Jigoku” is without a doubt the greatest portrayal of Hell I have ever seen in a movie.

Like many Japanese films, this one in particular seems both very familiar and at the same time very alien. The presentation of Hell is Buddhist, although it’s depiction of specific tortures for specific crimes, and it’s various “levels” it could easily pass for the Western “Dante’s Inferno” Christian interpretation of Hell. The main difference would be that in the end there is a scene that represents “purification.” Although purification is still a huge issue in the religion, the idea that Hell itself is process of purification (aside from possibly purgatory) is something that is completely absent, at least in mainstream Christianity. Also there are some prominent images of spoked wheels which I don't have any understanding of, although I’m sure they mean something Buddhism. At one point Shiro's fiancé is trapped behind a flaming wheel, and toward the end of the film Shiro is riding a spinning wheel that is painted with flowers and symbols. His deceased unborn child is on the other side of the wheel and Shiro is unable to reach her. My best guess is that the wheel represents eternity, but even if that is what it is, this is still a symbol that is very foreign to Western audiences.

Aside from the imagery of the film the thing that stands out the most is the character of Tamura. It is apparent that he represents part of Shiro as his darker “shadow self” although it is never clear if he is actually physically real. Everyone in the film sees him and interacts with him although it still seems that he might not really be there. This, above everything else, might be what makes the film so unique because I don’t think I've ever seen another movie where a character is both completely real and completely unreal at the same time. The actor who plays Tamura, Yoichi Numata, delivers a fantastic performance where he plays a demonic character which is both whimsical and sinister. According to the interviews in the special features Numata claims he didn't give his best performance, he didn't understand the character he was playing, and that he just did “whatever he felt” and the director never corrected him. This is probably the most impressive thing to me about this movie; that Numata’s ad-libbed performance worked out so perfectly for the film. If it hadn't, the "Jigoku" might have been a complete disaster.

This isn't a film that will appeal to everyone, but in my opinion “Jigoku” is one of the crown jewels of classic Japanese horror that we have available today. If anyone has even a passing interest in Japanese horror films this is definitely a “must see.”

Night of the Demons