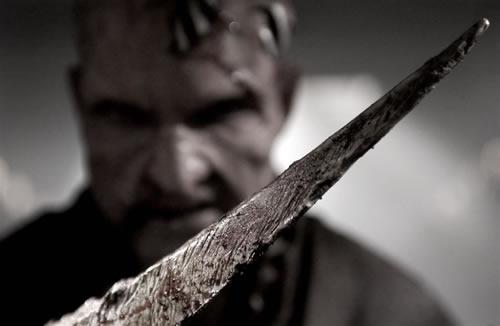 So many movies are pushed back repeatedly or, even worse, just dropped on the shelf, that it's tough to get excited about upcoming stuff as a genre fan. You think this happens to romantic comedies? Some movies, like "All the Boys Love Mandy Lane" or "Trick R Treat", I don't even care about anymore. Yes studios, you've made me lose interest completely.

Which brings me to "Mutant Chronicles"....

Sorry, but for most post-apocalyptic fare I'll wait until the actual apocalypse more than I will for other standard horror fare. Since first seeing the trailer for this somewhere online, I've been breathlessly waiting for this to appear in some form—oddly enough, none of my genre compatriots knew what I was talking about and rarely did any websites cover it. Not enough Amber Heard nudity for them, I guess.

It had actually gotten to the point where I honestly never expected it to get a real stateside release. Yes, I had to buy a bootleg—a dupe of a legitimate overseas release—of it from a sleazy dealer at a sleazy horror-con for one Abe Lincoln. I wish I didn't have to do it, but how else are jerked around fans supposed to see movies we've been all hyped up about? You're like a woman who continually teases a poor hapless nerd with your sexy ways, forcing him to go to a prostitute when you won't give it up. Yes, you made me visit a digital video whore. It's all your fault. I'll never be able to wash the stink off my junk.

Based on, I think, a role-playing game of some sort, "Mutant Chronicles" takes place in the year 2707, with four corporations running the world that are constantly at war with one another. We're thrown right in the middle of a bloody battlefield when the war is immediately interrupted by a door in the ground opening up and hordes of disfigured mutant marauders pouring out and hack-slashing everyone in sight. Imagine the opening of "Saving Private Ryan", except with, you know, deformed monsters with razor-spike arms cutting throats and torsos with no mercy.

Turns out the door on the battlefield is something called the “Machine”, an alien ship that landed on the Earth centuries ago that takes normal ol' humans and turns them into, well, the aforementioned mindless mutants. A religious order of sorts have been holding onto this secret and are the only ones who know how to stop it. Spiritual leader Brother Samuel (Ron Perlman) is put in charge when the other monks flee Earth and, along with bad-ass Maj. Hunter (Thomas Jane), puts together a suicide team of the best of the best to take the Machine on and the mutants out; think "The Dirty Dozen" as dremt up by RPG nerds.

"Mutant Chronicles" has no reason to sit on the shelf. Would it be a hit? No, of course not, but it's got such a scope that it needs to be seen in a theater. The movie is utterly beautiful, with everything meticulously designed. The world of 2707 is like a steam-punk Dark Ages sprouting from the ashes of a bombed-out WW2-ravaged England. Aside from it's good looks, the movie has the fun, adventurous strategy and depth of a great 1950s/1960s war picture; it takes it's time to tell the story, giving you real heroes to root for, and real obstacles for them to cross. It's enough to either make me want to join the Marines or play a table-top miniature war-game. Same difference, right?

Tom Jane, like Jason Statham, should be in every movie. He's like a next generation Harrison Ford: tough 'n' rugged, but always with “trust me” smirk about to come across his lips. Ron Perlman, like usual, gives his all, creating a surprisingly likable character, even giving a certain unexpected level of pathos to his character when a wholly unexpected fate befalls him. On the other hand, John Malkovich shows up and just doesn't give a damn, giving a hilariously languid extended cameo performance that would make Christopher Walken envious.

After doing a little research about this movie, my soul is a lot less burdened: the DVD released in Europe is apparently a different cut than the upcoming American one, which will finally be released by our friends at Magnolia on August 4 in a special director's cut. Yes, I will be buying that day and burning my bootleg. Still, just judging "Mutant Chronicles" from this boot, it's still one of the best movies I've seen this year—it just sucks I had to go to these lengths to say that.