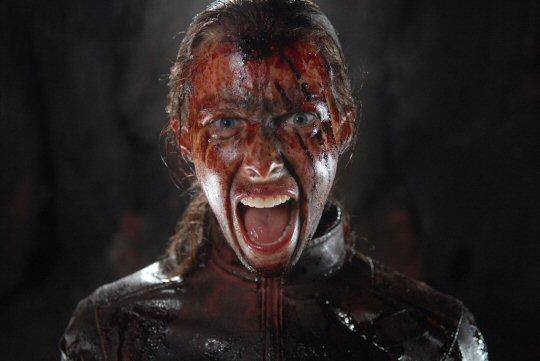 Neil Marshall's creepy 2005 subterranean horror flick "The Descent" was the first film in years to scare the crap out of me. It's a near-perfect blend of drama, suspense, jump scares, and gory action, not to mention one hell of a creature feature. The idea of a sequel never really appealed to me, especially if Marshall wasn't going to direct the picture himself. However, after watching a pair of surprisingly snazzy trailers late last year, my interest in the production started to shift, and I began to warm to the idea of another installment. My expectations weren't high, but I was willing to give it a chance. I'm very glad I did.

Jon Harris' "The Descent: Part 2", while nowhere near as intense or emotionally-draining as the original, is a genuinely engrossing experience from open to close. Granted, it's essentially a rehash with a few different characters and a handful of new camera angles, but Harris injects just enough creativity into this familiar formula for it to work. The action is fierce, the kills are uncomfortably bloody, and the ending is as shocking and unexpected as they come. All things considered, I was impressed.

That being said, there are certain things one must accept before embarking on this journey, particularly if you have problems with the American version of "The Descent". The sequel, I'm afraid, isn't interested in the suitably ambiguous ending found in the British version of the film. Instead, Harris and company opt to follow the US edit, which finds Sarah triumphantly emerging from the cave system with life and limb intact. Since Marshall's original ending is the one I happen to prefer, overcoming this hurdle was a bit of a problem. Not a huge problem, mind you, but enough of one for me to whine for a while.

Shauna Macdonald reprises her role as Sarah, the sole survivor of the ill-fated spelunking expedition that claimed the lives of her closest friends. The local police department isn't buying the poor girl's claims of amnesia, and are fairly convinced that she played some sort of role in the grisly demise of her companions. In order to help jog her failing memory, Sarah is forced to return to the blood-stained caverns where her friends perished. Along for the ride are a pair of law enforcement officials and three experienced cave explorers, none of whom are adequately prepared for the murderous hordes of crawlers lurking deep within the shadows.

Although the film suffers from some weak characterization and a few lapses in logic, "The Descent: Part 2" still manages generate a steady amount of quick, claustrophobic terror. Harris is a master of the unexpected jump scare, and utilizes this gimmick with shocking precision. He also smartly keeps the pacing fast furious, stopping only briefly to allow his characters to catch their breath before violently shoving them into the next gore-encrusted set piece. The bloodletting is a bit gratuitous, and Harris frequently lets the camera linger on the carnage a tad longer than he should. Great if you like your horror outrageously bloody, distracting if you don't.

Fans of the original -- even those who roll their eyes at the North American version of the film -- should be more than happy with "The Descent: Part 2". The acting is solid, the twists are jolting, and the action never lets up. And while it may not be as polished and accomplished as its counterpart, the movie retains the atmospheric nature of Marshall's masterpiece. Am I happy the door's been left wide open for another entry in the series? Absolutely not. Transforming "The Descent" into a franchise is a very bad idea, and I would hate to see it branch off in ridiculous directions. Sarah's story has been told, and it should rest its weary head right here.