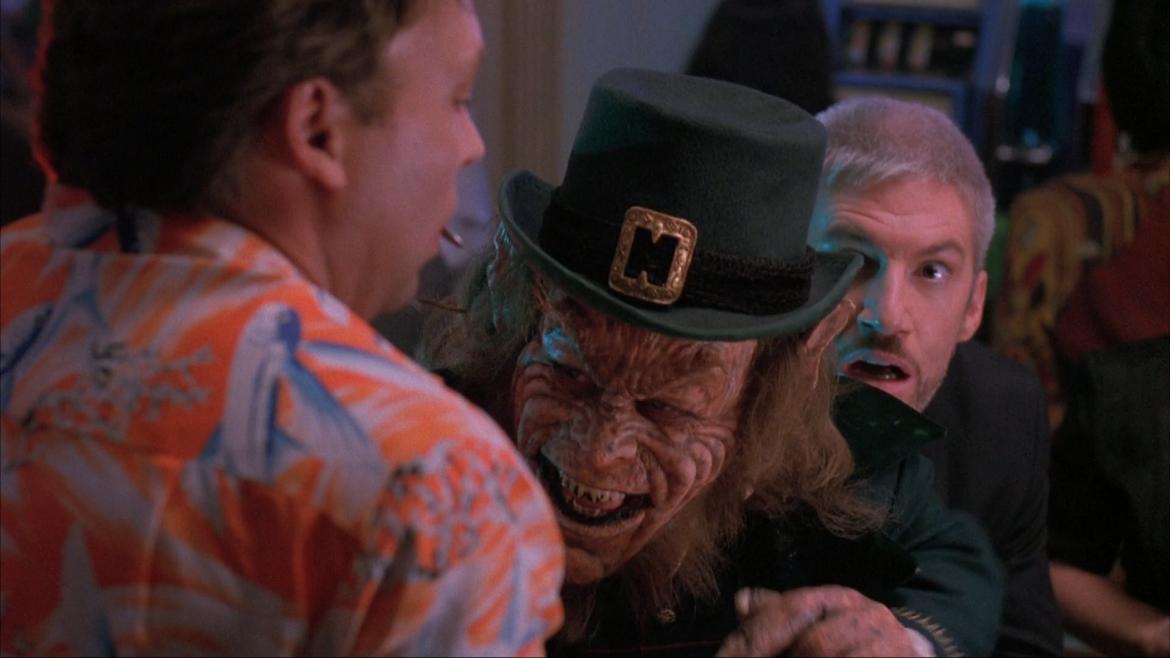 The alarming aspect to the mid 90's is that this was the time period when the horror franchises of years past had finally reached their boiling points. Freddy had already been put to bed by his creator with New Nightmare, Michael had reached his final origin story with The Curse of Michael Myers, and Jason was in hell. The slasher icons and franchises that had dominated the 80's and early 90's were in either in dire need of a reboot or the final nail in the coffin. The release of Scream in 1996 put these facts into perspective with audiences due to its ability to enlighten viewers on the state of horror. One franchise that still seemed to be ticking, and ultimately overlooked the Hollywood consensus that slashers were done, was the one involving a fantastical killer. Leprechaun 3 from 1995 was the clearly unneeded follow up to Leprechaun 2. Modern viewing gives the viewer the incessant thought of "why was this movie made"?

When Leprechaun fans last saw the mythical creature, he had been destroyed to never be heard from again. At the start of Leprechaun 3, however, he has been turned into a stone statue with a red medallion gracing his neck to keep him in form. After a homeless man sells the statue for twenty dollars to a pawn shop owner, the medallion comes off and the leprechaun begins his rampage. Deciding to bite off the owner's ear and big toe (remarking that he loves spicy Indian food all the while), the leprechaun tries to steal his gold back but is thwarted by an unsuspecting college student. Scott has been traveling cross country to reach Los Angeles for university life. Stopping through Las Vegas, Scott becomes infatuated with a girl he meets on the side of the road that ends up working as a magician's assistant at a casino. Once Scott gambles away his tuition money, he steals the leprechaun's gold coin which gives him the lucks he needs to win back his money he lost and more. When the employees of the casino see his luck they decide to steal the gold coin and play their own hand at the wishin' game. They all get what they desire, but also a taste of the leprechaun's wrath.

The major focus of this film is comedy. Focus is the key word though because it never is successful at creating strong humor in the intentional moments. This film is, however, unintentionally hilarious at several moments. The extras involved in the scenes were all fascinating and offered a majority of the low level enjoyment available while viewing. With a story set in Las Vegas it would seem logical to have an eclectic group of people bustling through the casino's slot rooms, but Leprechaun 3 is filmed with individuals all over the age of seventy that don't seem to realize they are in an actual movie. There are several scenes of extras looking around the room as if to say "why is there a little man with copious amounts of makeup on running around the room"?

The story, much like the sequel, spends a majority of the time trying to set up a reason for the leprechaun to continually chase Scott. The need to claim back his gold is present, but the added need to attack everyone that wished on it is never really explained. It seemed to be a choice by the writer and director to include as many random "kill them by their vice" type deaths as possible. Most of these are goofy, particularly Caroline Williams character's death in which her wish to be beautiful is paid back by having the sexual desirable parts blown up piece by piece. Clearly there was an attempt to honor the pun heavy work of Freddy Kreuger, but sadly Warwick Davis has never been a comparable Robert Englund.