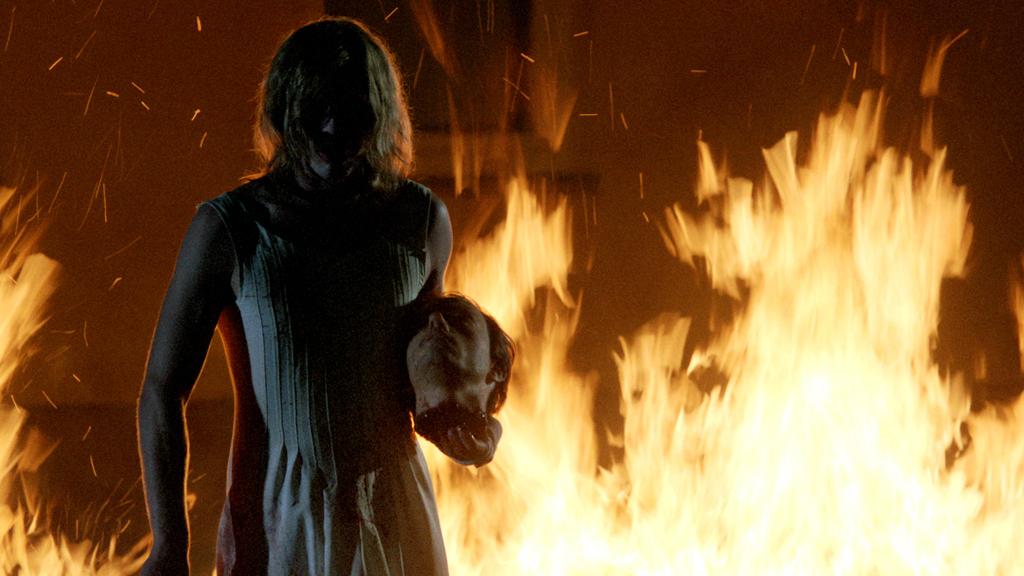 Seeing is believing; and if someone were to have foretold we’d be getting a genre film with a cross dressing samurai as its antagonist it would not be believed. Low and behold The Samurai- a genre bending debut feature from Till Kleinert that is ambitious and polarizing while falling just short of something brilliant.

Jakob (Michel Diercks) is a timid small town cop doing his best to keep a wolf from tormenting local residents. His strategy consists of hanging bags of meat in the forest, which earns Jakob a fair share of criticism among peers. When Jakob receives an elongated parcel addressed to “The Lonely Wolf” and a mysterious phone call from someone claiming to be the parcel’s owner he goes out to deliver the package. What he finds is a wiry man (Pit Bukowski) with long blonde hair, wearing an elegant white dress, and sporting a wild maniacal gaze. The man unsheathes a katana from the package and leads Jakob on the chase of his life- one that’s littered with severed heads and peculiar homosexual undertones.

The Samurai is many things; subtle is not one of them. In spite of the themes threatening to beat viewers into submission the film restrained just enough to never be insufferable. Sexual identity, repression, and pent up frustration are ideas that are running rampant in every scene- personified by the titular character. The fact that our main character, Jakob, is intrigued by the samurai and is trying his damnedest to chase him down make those themes stick out like a sore thumb. Despite the transparency, Kleinert’s characters (particularly Bukowski’s samurai) are impressively written and the performances are a compliment to that.

This genre mash-up is crammed full of set pieces that are expertly staged and shot with the eye and skill of a seasoned pro. For such a small movie many of the scenes play out with grand flair. One scene in particular featuring a one-on-one dance is unintentionally funny, but it takes place in front of a crackling picturesque fire and the score underneath is both haunting and oddly beautiful.

Clocking in just under 80 minutes The Samurai’s brisk pace and visual genius hint at a filmmaker with an extremely bright future. Kleinert’s debut film is dark yet playful and balances bursts of violence without ever feeling over-the-top. It is the film’s theme pellucidity and eyebrow raising final few minutes will prove to be problematic for some. Still, if you see one transvestite samurai movie this year, look no further than, The Samurai.