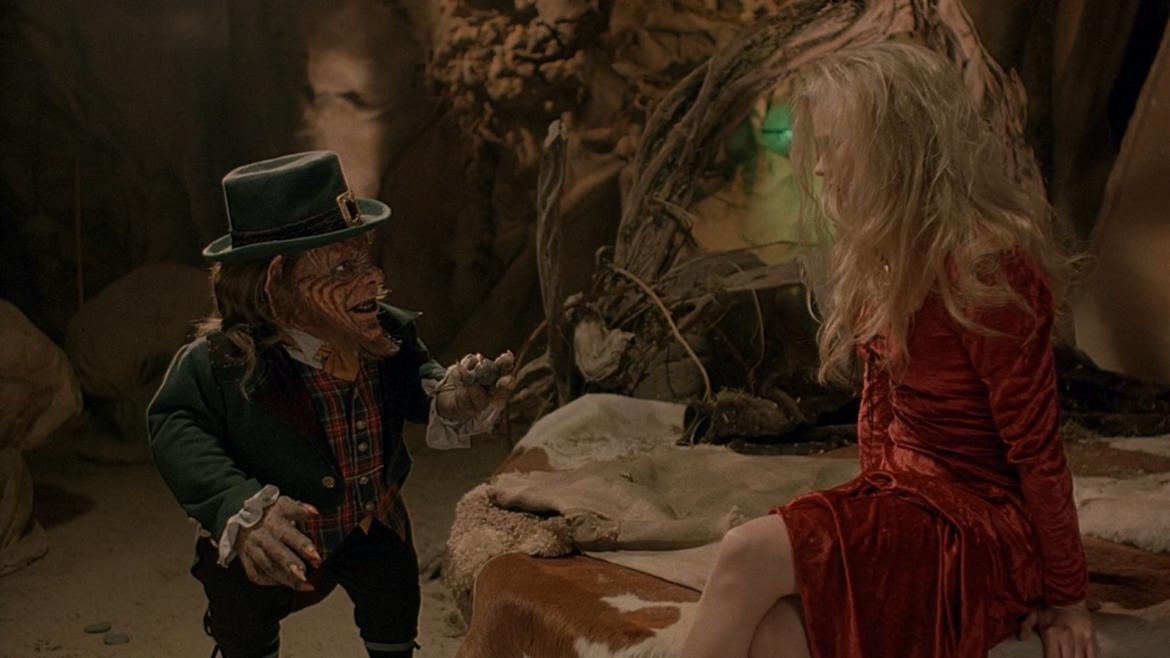 There are franchises where more than two films existing within it seems incomprehensible. While horror characters can be taken into new and "interesting" territories in order to keep a franchise fresh, it does not necessarily make them successful entries. The original Leprechaun film was a crazy and arguably ingenious marketing tool to get audiences to view it out of the sheer curiosity of how a leprechaun could act as a killer. This curiosity gained enough support to allow a sequel; not just one either. Thus begins the conversation of "what on earth could the second chapter in the Leprechaun franchise have to say"? With aspects of the first film's plot included but shoved to the background, a city setting with random plot points, and questionable choices of tone, Leprechaun 2 is an unnecessary and downright unenjoyable viewing experience.

Beginning one thousand years in the past, the film explains the origins of how leprechauns find their wives. Literally. After telling his slave that once he finds his bride he will be free, the leprechaun picks a young blonde woman that ends up being the slaves daughter. He makes her sneeze three times which causes her to be trapped for generations by the killer. The film then jumps forward one thousand years to Los Angeles. A young woman that looks remarkably similar to the betrothed of the leprechaun wanders around the city going on dates. One man in particular, a cheesy tour guide trying to keep his crazy uncle's horror tour afloat, wins her affections. Suddenly the leprechaun appears after hitting a homeless man with a tree root, cackling all the while. The leprechaun claims his new bride by throwing a gold chastity belt around her neck that causes her to constantly convulse. Unfortunately, the young tour guide steals a gold coin from the leprechaun which causes more turmoil for the green tinted killer.

It seems nearly impossible to fully explain the flow of this film. The idea that the leprechaun will always need every piece of his gold, as it was in the first film, is present but not the main crux of the drama. In fact the movie sets up that finding a wife is the most important thing to the killer. He finds a wife, but for unexplained reasons, he decides to wait another thousand years to seal the deal. Once the movie gets into the modern Los Angeles setting, there seems to be no point to any decision made by the characters. The leprechaun just appears and kills a random young male, but still does not take his "bride". Once he loses the gold coin though, then he goes into postal mode and takes the woman. By the end of the film, the need for the bride character is completely unnecessary. What happens between all of this are scenes of the leprechaun having drinking contests and riding go-karts. These are the moments where the tone of the film are brought into serious question. There is an apparent attempt at comedy, especially with how often the leprechaun pops up with a sharp toothed grin and obnoxious pun. These are thrown into scenes of peril where characters are seemingly afraid of the killer, however these don't translate to the viewer. Essentially its like watching people scream and run from a kitten.

It's clear that Leprechaun 2 is not a good horror movie; in fact, it's not a good movie at all. The real question then becomes: is this a movie so bad that it's worth watching? The answer is a crystal clear "no". The insane plot and random sequence of events delivers an experience that is boring and mildly frustrating. It's shocking to know that there is a sequel to this film as it does not provide an ounce of good times.