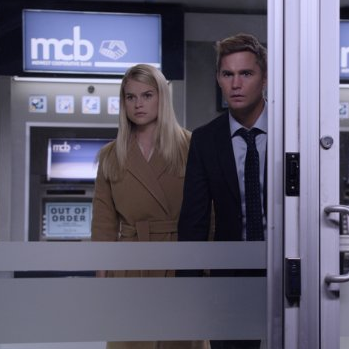 "Buried", "Frozen", "Phone Booth" and countless other horror/thrillers have tried their hand at the 'single location' genre as I'll call it. The genre is a problem in itself; relying exclusively on compelling characters, mysterious motives, or potential plot twists with the setting to provide exciting entertainment. For example "Buried" plays upon the charisma of Ryan Reynolds and his character's everyman plight. "Frozen" adds the wrinkle that the ski resort won't be open for another week and a blizzard is coming. And "Phone Booth" adds a bit of everything with a mysterious sniper, Colin Farrell's bangs, and bystanders involved in the plot. "ATM" is a new addition to the genre that literally adds none of the interesting plot dynamics of its trailblazers, or trying something new to freshen the formula.

David (Brian Geraghty) and Corey (Josh Peck) are good friends and coworkers at a financial institution. Just before heading off to the company Christmas party, it's revealed David has lost an unknown client's life savings accidentally. This doesn't stop the duo from attending the party, nor David from finally making a pass at Emily (Alice Eve), the firm's departing most desirable female. David's advances are reciprocated but Corey throws a wrench in the plans insisting David take him home, as he's too drunk and has no cash for a cab. On the way to drop off Corey the trio stop at a remote and enclosed ATM machine for cash. Once all three are conveniently packed inside the standing structure a hooded figure emerges without issuing any demands. Various action and reaction occurs as the three attempt to maneuver past their predator and escape to freedom.

To lead with the good, "ATM" looks great. Bengt Jonsson uses his camera in simple but effective ways that keep the action on screen far more interesting than it has reason to be. A setting so bereft of interesting scenery and images is maintained with a cold and calculating precision that actually enhances the product considerably. Here's hoping that the $3 million budget was spent here, because it's not present anywhere else.

The three leads in this film, Geraghty, Peck and Eve, are completely unfit for this content. They're all three up and coming hollywood types so I see the appeal, but none fit the bill here. Geraghty comes across far too earnest in his courtship of Eve, and particularly loses his presence once he has to become a reactionary character to the hooded figure. Eve is serviceable but, again, out of place. Trying to make an audience believe that this British Blonde Bombshell would be anywhere near this company or in the company of this duo is ludicrous. Add in that she's mousy and insecure; there's more plausibility in a "Transformers" film. And Josh Peck, he's terrible. Playing a character that's meant to be repellent and polarizing is one thing, actually being repellent and polarizing while playing that character is another. real6 He is magnetic in that constantly throughout the film I found myself praying for any reprieve of him I might be given.

Not all the bad is reserved for the cast though; the script is devoid of intelligence. What writer Chris Sparling thinks is clever and a fun turn of events quickly devolves into whiplash inducing shock as the film concludes. Being a citizen of the (northern) southeast, I have never laid eyes on this style of ATM. Most are free standing or attached to their banking institutions. A fully enclosed structure of this size and scale seems like a vast waste of resources except in the biggest of cities, but even there I doubt they'd be featured in a location this remote.

There's no doubt in my mind that this film is supposed to contain 'subtext' regarding the collapse of 2008 and the financial repercussions we all faced. The loss of the client's life savings, Corey being an investment banker that's too cheap for his own cab, and the fact that a random citizen is stalking and killing people for nefarious reasons at an ATM. Cutting to the chase, this is an abysmal excuse for a horror film or thriller for that matter. The concept isn't new, the lead men are loathsome performers, the action is tepid at best, and whatever social commentary there is is excised by the quality of the film. All the plot contrivances throughout this film are enough to make even the most devoted "Saw" fan cringe with embarrassment. Just stick to the 'cat deposit' scene from "American Psycho" is you want real insanity from an ATM.