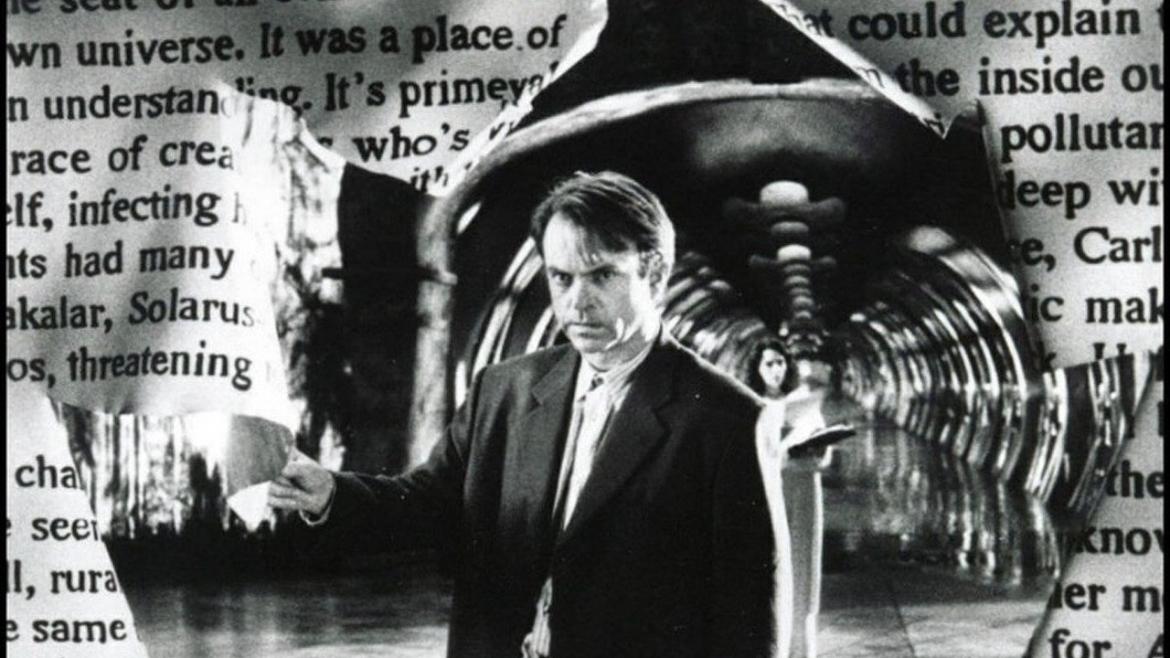 In the Mouth of Madness (Movie Review)

Much like the despicable, cantankerous visionary whose work inspired it, In the Mouth of Madness divides horror fans into polarized camps. This unruly tale of an insurance agent searching for a missing writer is bursting at the seams with loosely assembled horror elements that have virtually no reason to be sharing the same film. The plot is infamous for confusing the lead actors mid-production, and it all wraps up with a Mobius strip of an ending that may have you hurling your popcorn at the screen in rage. Is it worth it? As with Lovecraft, atmosphere is everything.

After being violently admitted to an asylum, John Trent (Sam Neill) confides to a psychologist that he’s been driven mad by the work of a popular horror writer named Sutter Cane--specifically Cane’s most recent novel, In the Mouth of Madness. In flashback, we see that Trent’s obsession with Cane began soon after the author went missing and Trent was hired to investigate fraud claims at Cane’s publishing house. Trent becomes convinced that Hobb’s End, New Hampshire--the fictional setting of Cane’s gothic tales--must be a real place, and that clues to Cane’s disappearance might be found there. With Cane’s editor Linda Styles (Julie Carmen) as his travel companion, Trent sets off on his unlikely journey, and after a bizarre night of driving through unreal conditions the pair find themselves inexplicably in Hobb’s End.

Hobb’s End is the movie’s centerpiece, a Pandora’s box from which Cane’s psychosis explodes. Your enjoyment of In The Mouth of Madness will be influenced almost exclusively by how fair you think it is to spend this much time on a guided tour through the unrelated works of a writer who doesn’t exist. As Trent and Styles explore Hobb’s End, they encounter paintings that move, a horde of bloodthirsty children, tentacled creatures, and a deceptively docile innkeep named Mrs. Pickman (David Lynch regular Frances Bay). For comparison, a similar movie about the works of Stephen King would be 90 minutes of people walking through Derry, Maine and randomly encountering killer cars, dogs, clowns, and prom queens.

The horror may be disparate and episodic, but it works, and the absence of narrative logic while the characters roam Hobb’s End maintains the suspense. The practical effects are fine, the mood is sufficiently dreadful, and Mrs. Pickman proves to be among the most terrifying of Cane’s creations. When Trent finally reaches Cane, the Lovecraft-cribbed plot is appropriately bewildering, involving a race of ancient creatures that the writer is unleashing on humanity.

Unfortunately, when the movie returns to Trent and his psychologist, Carpenter skips over this apocalypse in favor of a pat-on-the-back ending that is sure to divide your viewing buddies: I thought it was creepy but a little easy. The old line about movies inspired by Lovecraft is worn out but true: most of them stink (if they don’t, they succeed by drastically reshaping the source material). In the Mouth of Madness will satisfy if you’re already in the club, but it may not convert the skeptics.