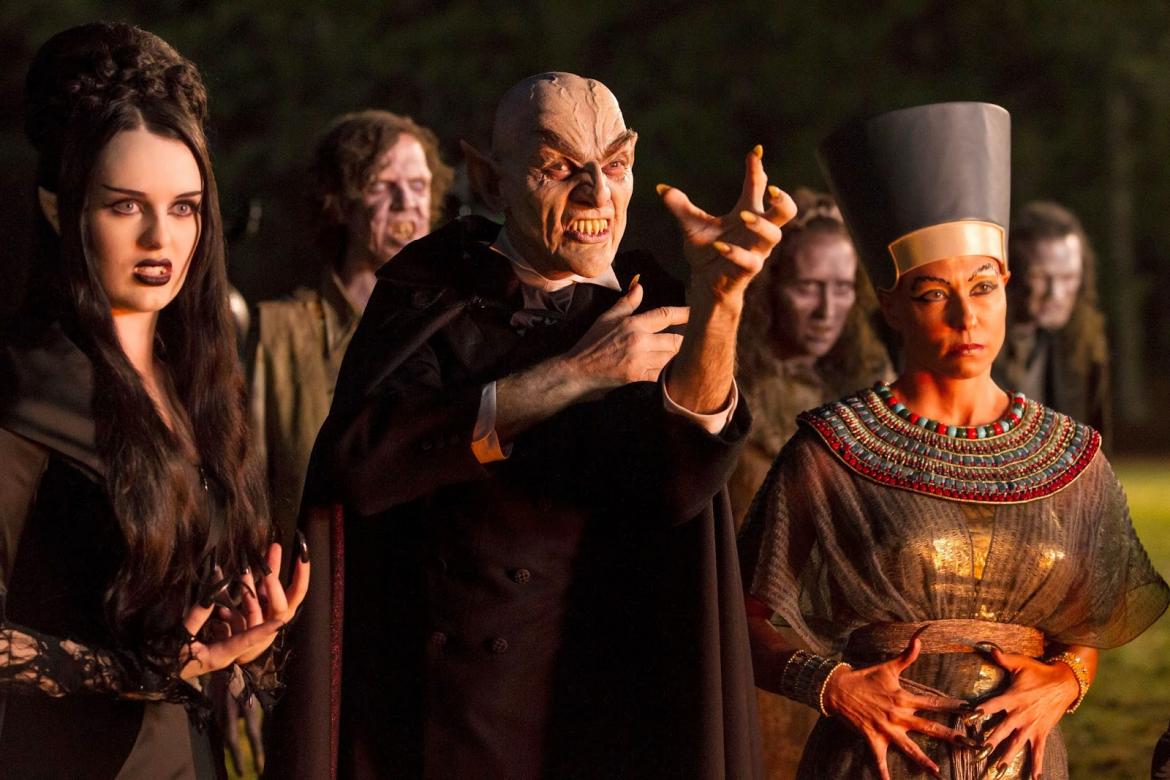 It's difficult to classify what is more terrifying about the Goosebumps film: the movie itself, or the fact that book series its based off of is considered classic. Starting in the early 1990's, the Goosebumps series of books were marketed toward children that were curious about the horror genre but didn't have the reading level (or parental consent) to pick up a Stephen King novel. They told stories of whacky horrors for typically young characters to encounter and overcome. The monsters that inhabited the books ranged across the board from giant praying mantis's to demon possessed masks that could control the wearer. Now, twenty years later, these books are considered old enough to receive a nostalgic treatment through film. Despite this revelation being a difficult swallow for those that grew up knowing of the R.L. Stine series, it is a viable series to pull inspiration from in this modern adaptation society. Goosbumps manages to be a fun, family driven ride with interesting choices throughout the plot. What makes the film fascinating though is its ability to be much better than expected.

Zach (Dylan Minnette) has recently lost his father. If dealing with that heartache isn't enough, his mother Gale (Amy Ryan) snagged a new job as a vice principal in a small town's high school. Moving to a new town is never easy and Zach already feels the pressure as his neighbor, Mr. Stine (Jack Black), threatens him to stay away from him and his daughter. Of course, Stine's daughter Hannah (Odeyah Rush) sees something special in Zach and befriends him despite her father's wishes. On his first day of school, Zach meets his soon to be clinger buddy named Champ (Ryan Lee) who doesn't know what it's like to have a real friend. With the possibilites of a new life on the horizon, Zach finds himself worrying about Hannah's well being with her strange father. He decides to break into their house to make sure that Hannah is safe, but instead he opens a mysteriously locked book. When an abominable snowman seemingly straight from one of R.L. Stine's Goosebumps books emerges from the pages, Hannah reveals that her father has a gift that has serious consequences. The creator of the Goosebumps series has the ability to create real monsters from his thoughts and conjure them into reality via his pages. Once Slappy the ventriloquist dummy emerges from another book, calamity ensues on the town. It's up to Zach and his new gang to return all of Stine's monsters back to the page and save the town from destruction.

The overall concept to the film is dangerously effective. There are well over one hundred books under the Goosebumps name which makes choosing a specific story to pull from nearly impossible. Instead, the writing team decided to take a meta approach and make R.L. Stine an actual character living in the seemingly real world with his successful book series. What this creates is a film that relates instantly to the viewer and captures the overall tone of the series of books. Every iteration was filled with crazy situations for the protagonists to solve, usually antagonized by a monster of some form, and ultimately bring the world back to normal. Taking several monsters and characters from the Stine works and placing them as the main antagonists within the film is genius. Readers will be delighted to see the infamous Slappy return as the mastermind behind the town's downfall. Several of the group monster shots already boast for Blu-Ray and DVD sales as fans will want to pause the scene to pick out every monster they can recognize. In turn this also allows the film to step back and forth out of different horror genres: monster, possession, body horror, and even slasher to a point. The films ability to be self aware of its place in youth readership as well as the horror genre as a whole is impressive and the selling point for the older fans.

The outlining aspects to the story are also notably solid. There are of course romantic side plots and melodramatic heart to heart scenes to add extra layers to the terror around the characters. These choices and scenes aren't the best aspects to the film, but they never ruin any of the fun involved. Jack Black as R.L. Stine (and the voices of Slappy and the Invisible Boy) manages to bring his brand of comedy into the mix without being over the top like in previous performances. It was a great casting choice as his earlier scenes are played more menacingly without becoming alarmingly strange for the viewer. The rest of the cast is solid and give performances that neither outshine or are overshadowed by the monsters within the film.

Goosebumps is just surprisingly more fun than it seems that it should be. While there aren't many amazing lines of comedy or moments that will push the film into iconic status a-la The Monster Squad, the overall tone and ability of the story to maintain the essence of the book series is impressive. In its own way, Goosebumps is the Freddy vs. Jason of the young viewers' horror. It doesn't do many things new, but it knows exactly how to create a world that should not exist.