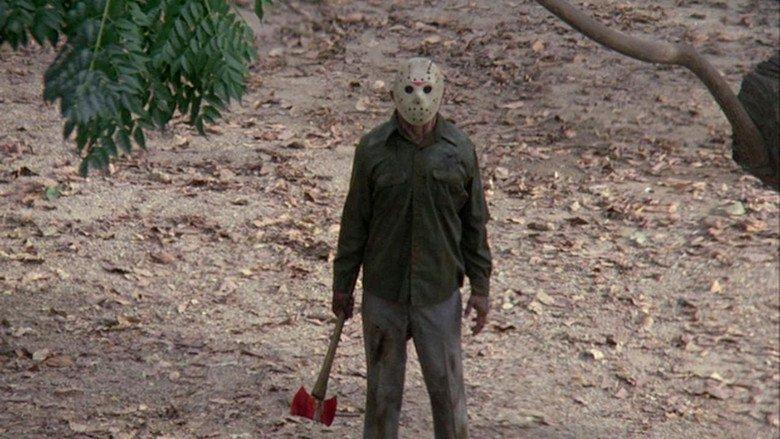 This is the fifth installment of our head-to-head review between the A Nightmare on Elm Street and Friday the 13th franchises. Check out what Sophie had to say about the corresponding Freddy pic here!

The growing pains of a film franchise tend to kick in around the fourth or fifth title mainly due to the original source material losing its steam. What new approach is there to bring to the table that hasn't already been poked and prodded by directors and screenwriters alike? Much like Halloween 4: The Return of Michael Myers, the last film in the Jason franchise Friday the 13th Part 4: The Final Chapter set up a new killer, or at least the concept that the titular slasher killer set up in part one would no longer lead the pack. Tommy Jarvis, much like little Michael Myers protege Jamie Lloyd, had slashed his way through a seemingly unstoppable killer when audiences last sat down to visit with Jason. This rage that had been unleashed upon the hockey masked killer was a sign that a dormant psychopathic tendency was ready to bloom and grow out of Tommy; perhaps as a continuation of the teen camp slasher. However, once Friday the 13th Part V: A New Beginning starts, its clear that the reigns had been pulled hard enough to bring any idea of a new killer to a complete halt. The confusing part about that fact is that Jason is indeed back as the killer, but he's also not as well. The confusion of who exactly is behind the mask is felt strongly throughout the run of the film, essentially creating an experience that feels unsatisfying and undeniably quirky.

Previously on Friday the 13th, Jason had met his maker by the hands of young Tommy Jarvis (Corey Feldman). Opening part five on a dream sequence, Tommy watches as two grave robbers resurrect Jason and ultimately pay the price with their lives. Awakening from this nightmare, older teenage Tommy (now played by John Shepherd) is heading to a halfway house for troubled teens. His nightmares of Jason also manifest as ghostly appearances during the day to make Tommy lash out in anger not knowing what's real and what's in his imagination. A group of new teens all inhabit the halfway house as does young Reggie (Shavar Ross) who is there being watched by his grandfather. After one chocolate loving teen is murdered by another, the house goes on high alert to keep as much violence away as possible. Eventually more teens find their ends at the hands of a new killer that is never fully exposed until the end. Many suspects are thrown into the mix including Tommy himself, the head doctor Matt, the kindly cook, and even Jason back from the dead. When the mask is uncovered after all the teens but Tommy, Reggie, and Pam are left alive, the killer turns out to be none other than the paramedic.

What's difficult about this iteration of the franchise is that it doesn't fully step away from Jason's character even though the identity of the killer is meant to be mysterious. Tommy has dreams and daytime flashes of Jason but it's never truly depicted that he is back from the dead. Instead his name is thrown around as well as several nods to different suspects that could have picked up the machete. Most of them are downright goofy, especially Reggie's sweet grandfather, with the actual killer being telegraphed far too early into the film. Once the chocolate bar loving teen is killed, the introduction of the paramedics reveals how convaluted the unmasking is going to be. The camera hangs far too long on Roy, who is seemingly a character that should see no attention from the audience, and yet that decision to show him plasters his identity right on the screen. His familial tie to the killed teen is supposed to be reminiscent of Mrs. Voorhees and her decision to kill for the death of her son, however Roy's motives and decisions don't match the at least understandable kill pattern of Pamela. The angsty axe wielding teen that kills the chocolate bar man is simply put in jail and is never heard from again. Roy instead kills every other teen at the camp, as well as two hillbilly neighbors, two leather clad buddies, a guy looking to score cocaine and a hot date, a waitress, a man taking a dump, and the man's girlfriend. All of these characters arguably have nothing to do with Roy's sons death and yet those are his targets.

Apart from the sloppy killer reveal, the movie is much slower and more labored than the previous entries. The positive aspects to it come from moments that are unintentionally hilarious. Arguably one of the most memorable moments in the franchise happens here when Demon, Reggie's brother, is going to the bathroom while crooning "ooooh baby, oooh baby" to his girlfriend. It's insane, gross, hilarious, and a high note that definitely shouldn't be happening in a Friday the 13th film. The hillbilly stereotype neighbors are so over the top that they surpass annoying and become strangely mesmerizing; like a firework that never quite stops exploding. Overall, Friday the 13th Part V: A New Beginning only offers some throw away laughs and a hard to swallow killer. If the franchise had ended on the death of Roy then the previous four films might have lost some of their small time magic, and the series would have slipped into obscurity alongside countless other slasher movie attempts.

Most Creative Kill: This has to go to Demon's unfortunate demise after finishing off those "damn enchiladas". Once he no longer hears his girlfriend crooning back to him, he feels the uneasiness that something just isn't right. As the outhouse begins to shake and rumble, a spear comes shooting through a nearby wall. Suddenly Demon is trapped in the smelliest little coffin possible. As the spear continues to move from point to point, Demon is finally stabbed clean through the gut; no longer able to enjoy Mexican food ever again.

Movies Like Friday the 13th Part V: A New Beginning