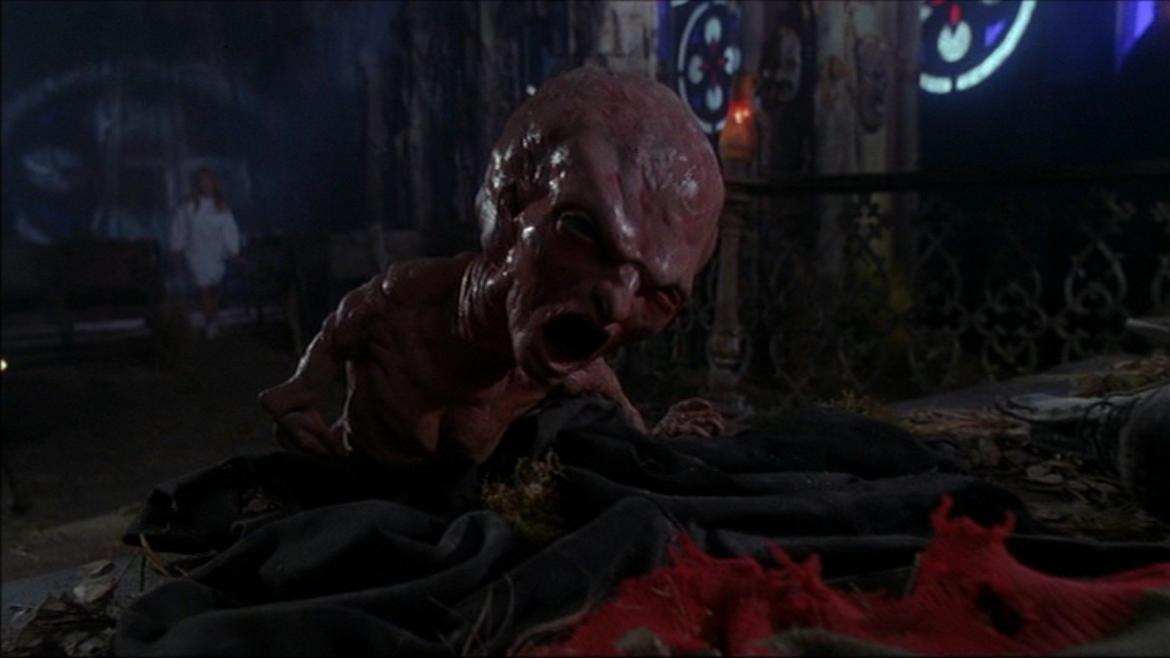 A Nightmare on Elm Street 5: The Dream Child (Movie Review)

This is the fifth installment of our head-to-head review between the Nightmare on Elm Street and Friday the 13th franchises. Check out what Evan had to say about the corresponding Jason pic here!

Let’s go ahead and get one thing straight, I feel pretty confident saying that Jason wins this week. I haven’t even seen the fifth installment in the Friday the 13th franchise, but I can say with all honesty that I find it hard to believe that it could have been worse than A Nightmare on Elm Street 5: The Dream Child. Now that that’s out of the way, let’s get started.

The juggernaut that was a Nightmare on Elm Street refused to quit, with a new movie being churned out every year. This limited production time, sadly, also meant that there are elements of just about every one of these movies that feel like they would be well served by a revision or two. In no film so far has that been so painfully obvious as it is in The Dream Child. After Alice won her defeat against Freddy in the end of the last movie, freeing the souls of his victims, she thought that she could have her life back. Now, as she prepares to graduate from high school Freddy is back in her dreams and this time the dream master seems powerless against him. Alice’s boyfriend Dan falls to Freddy while rushing to her aid and when Alice wakes in the hospital she learns that not only is Dan dead, but she is pregnant with his child. And with this revelation the puzzle pieces fall into place...sort of.

This movie spends almost no time or energy into explaining what is happening other than to say that Freddy is somehow able to use Jacob (the tiny fetus inside Alice that she hadn’t even named yet) against her. After Alice gets confirmation from the doctor that babies do, in fact, dream in the womb, the film seems perfectly happy to leave it at that. Don’t worry folks, I’m sure the writers behind this masterpiece put a lot of thought into how exactly that makes sense - please note the sarcasm, they obviously didn’t. In the last movie, Alice’s dreams were the gateway that allowed Freddy to get to her friends. This little plot device allowed the franchise to live on as the original cast of characters were killed off. However, if the dreams this time are in fact Jacob’s, how is Freddy able to get to Alice’s friends? Surely Jacob can’t know them any more than he knows his own mother. There is also the small problem of how to make a fetus a character, but don’t worry, they found a (terrible) way around that too. Alice continually meets a young boy in her dream who appears to be seven or eight years old named Jacob, who reveals himself to be her son at just the right dramatic moment. So we’re good. Not.

This movie also brings back Amanda Krueger, the nun who was tortured and gang-raped by the patients in an asylum before giving birth to Freddy. Alice sees Freddy’s birth in a dream, where the baby that is born is already deformed and burned, which is confusing all on its own. When it becomes clear that Amanda is the key to defeating Freddy this time, the nun has inconveniently lost the uncanny ability to show up at the appropriate times in the corporeal world to provide helpful hints that she had in the third movie. Now, Alice and her friends must find Amanda’s spirit and bring her into the dream where she can help Jacob to help Alice to defeat Krueger. Not convoluted at all.

This movie was a hot mess all around, from the story to the atrocious acting. To top it all off, there were only three deaths in the entire film and they were all pretty boring. There is not a scare to be had in this Nightmare, and not much else, either.

Most Creative Kill: Not only are the options here low in quantity, they are low in quality. The death that I found the most memorable was probably Mark’s death, but it was memorable for all the wrong reasons. Mark is a comic nerd who also happens to be hemophobic (it’s "funny" because comics are so gory.) Freddy fashions Mark into a 2D paper version of himself before slashing that paper to bits. The death is not only bloodless, but largely emotionless as Mark’s paper self can’t move or even emote through facial expressions. It ends up being comical in the worst way.

Movies Like A Nightmare on Elm Street 5: The Dream Child