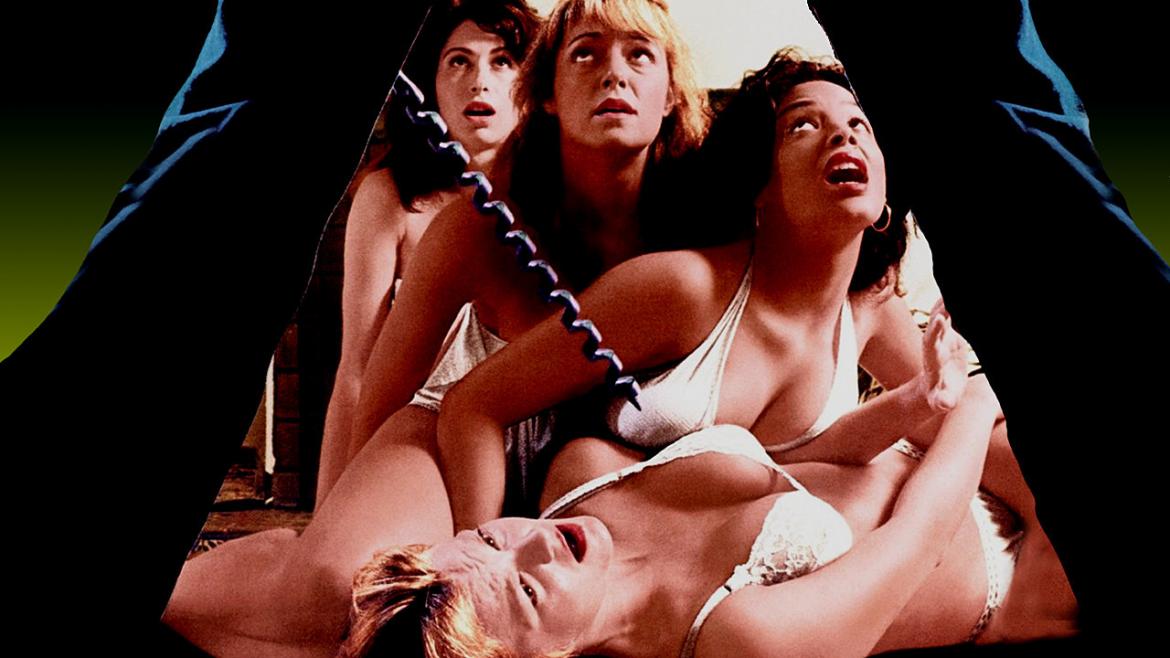 One cannot wade very far into the fray of female-directed horror movies without stumbling over The Slumber Party Massacre. This 1982 cult classic took the slasher and exploitation genres on with a feminist tilt, with marked success. So how could we go all the way through Women in Horror month without reviewing it? We can’t, and so we won’t.

The Slumber Party Massacre—written by Rita Mae Brown and directed by Amy Holden Jones—walks well-worn ground. Trish’s parents go out of town for the weekend and, with the house to herself, she decides to have her friends over for a good old-fashioned slumber party, no boys allowed (or so she thinks). Her parents seem to have no qualms about leaving their only child home alone with the radio continually blaring the story of a serial killer on the loose. Why would they? But the slumber party soon gets out of hand; first, when the boys join in, and second, when they discover that the escaped killer is diminishing their numbers one by one.

Even on the most superficial viewing of this movie, viewers would be hard pressed to miss the self awareness that every layer of the movie is imbued with. The sexual innuendos are pretty easy to catch, layer one. The movie features a killer whose weapon of choice is a foot-long power drill. With this very phallic weapon (which he at one point brandishes between his legs), he very literally penetrates his victims, until he is effectively castrated and then killed by our final girl, Valerie. In the moment that she takes up a weapon of her own (a large machete) and cuts off a great majority of the drill bit’s tip, Valerie takes on the role of the active final girl that Carol J. Clover describes in Men, Women, and Chainsaws. Then we have the exploitation of the exploitation genre, layer two. There is plenty of nudity in The Slumber Party Massacre, and a casual viewer might totally miss the subtle subversion of the typical male gaze that is happening here. The camera shots are often awkward and intentional in a way that draw the audience’s attention to how uncomfortable this gratuitous nudity is. On top of that, a great majority of the nudity occurs within the framing of a literal male gaze (in the form of the boys watching the girls change from an open window for example). All of this exists to demonstrate the absurdity of a presumption of a male audience that we have become all too accustomed to.

Not to mention, Valerie and her younger sister Courtney who engage in behavior we would more readily expect from a group of preteen boys, layer three. Casually perusing Playgirl and joking about the centerfolds.

On its face, it could be mistaken for just another T&A 80’s slasher, but The Slumber Party Massacre has so much more going for it than that. One of the earliest and most well-known examples of a woman’s perspective on the genre that spawned innumerable amounts of scantily-clad women and misogyny, this movie is a must watch this February.