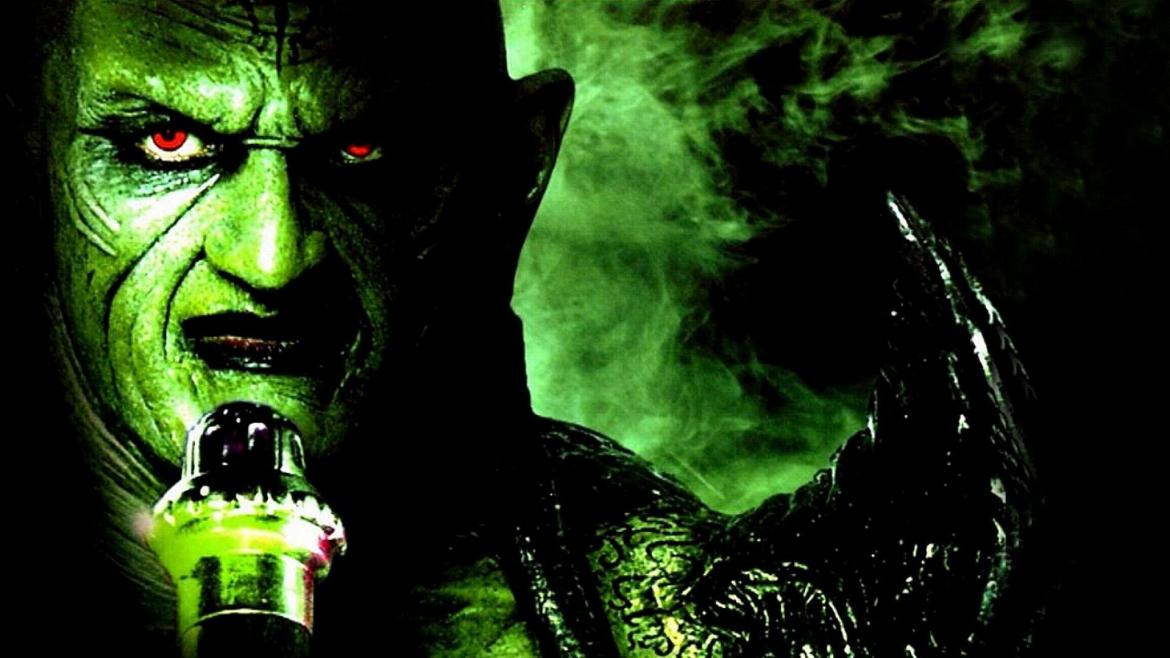 Having unraveled the mysteries of college in his last outing, The Djinn (John Novak/Michael Trucco) sets out in Wishmaster 4: The Prophecy Fulfilled to conquer his greatest challenge yet: human love. Should he successfully deconstruct the complexities of K-I-S-S-I-N-G, The Djinn will be able to unleash his brethren on the Earth. Should he fail? Well, what’s the opposite of a djinn with a baby carriage?

First of all, credit to The Djinn for finally realizing that running up to people and going “Boo! I’m The Djinn! Make three wishes so I can doom humanity!” wasn’t the best course of action. This time he plays things closer to the chest, gradually tricking his “waker,” Lisa (played by Tara Spencer-Nairn), into unknowingly making the necessary three wishes. However, her final wish is something about loving The Djinn for who he truly is and since who he truly is is a green-blue monster, this presents a problem. As love must be given freely, he must get Lisa to fall in love with him, thus granting the third wish and releasing the other djinn.

There is a lot going on in Wishmaster 4. We haven’t even gotten to Lisa’s crumbling relationship with her wheel-chair bound, depressed boyfriend, Sam (Jason Thompson), the useless sword-wielding guy who shows up because suddenly this franchise is obsessed with sword-wielding guys who are useless, or the trio of other djinn hounding The Djinn to grant her stinking wish already. It’s no wonder this 90 minute movie feels like three hours. A rough three hours.

Things start off promising. The angle with Lisa and her boyfriend – they’ve suffered a terrible tragedy and it’s costing them physically, financially, and emotionally – is smart. It’s exactly the type of thing this franchise should be doing. Except, screenwriter John Benjamin Martin and director Chris Angel can’t keep Sam from devolving into a caricature of depression and shortly after that happens, the film becomes overwhelmed by hokey melodrama.

As for The Djinn, the main bright spot is Trucco, who does his best impression of original Djinn Andrew Divoff. Everything else that made this character even remotely interesting is buried under a heap of bad writing and worse special effects. Truly, the less said about The Djinn’s kills, the better. The only one worth mentioning is how he helps Sam win his court case against the company that landed him in the wheelchair. This is the movie’s signature moment – provided you can accept that it makes no logical sense and can forgive the garbage special effects. As for exploring the secrets of the heart, it makes about as much sense as anything else this franchise has done to expand his victim count. That’s almost a positive.

Wishmaster 4: The Prophecy Fulfilled has a kernel of a good idea: putting real(ish), desperate people in the sights of The Djinn. There’s just not enough budget or talent available to sustain it and soon this movie becomes yet another chintzy, block-headed entry in a franchise crowded with them. The film’s opening voiceover warns viewers to “fear one thing, fear the djinn,” but in truth, the only thing left to fear is more sequels.