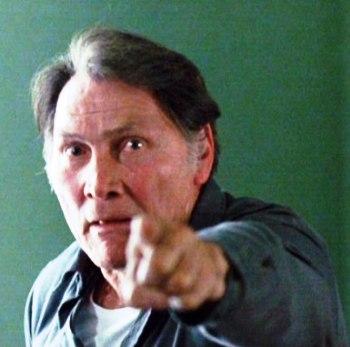 At one point in “Alone in the Dark”, Jack Palance’s unstable former POW character tells the new doctor assigned to his mental institution “There are no crazy people, doctor. We’re all just on vacation.” Later, Palance teams up with a hulking child molester, a faceless psychopath known as “The Bleeder”, and an apocalyptic arsonist preacher played by Martin Landau, and goes on a vacation of sorts by escaping the asylum during a blackout in order to stalk the doctor and his family. “Alone in the Dark” never made a big splash in the public consciousness and so these days the title is more likely to bring to mind one of Uwe Boll’s most notorious video game adaptation craptastrophes, which is a shame because this is a forgotten gem of the early slasher period.

Dwight Shultz, in a role reversal from the “Howling Mad” Murdock character he played on the A-Team TV series, is the sane victim in this movie, a psychiatrist newly recruited to an asylum headed by a sensimillia-puffing doctor played by Donald Sutherland. Sutherland plays a psychiatrist who is in many ways the inverse of Dr. Loomis from Halloween. Instead of a doomsayer warning the world of a dangerous psychotic, he’s a new age quack with some less than conventional ideas about mental health treatment. He plays to his patients’ delusions and refers to his them as “voyagers” who can’t adapt to society because they are adrift a psychotic world. The film often verges on a parody of the practice of psychiatry and the very concept of mental health in a way that would make for an excellent double feature with William Peter Blatty’s “Exorcist” semi-sequel “The Ninth Configuration”.

A paranoid delusion leads Palance to believe that Shultz has killed the doctor he has been hired to replace and that his next victims will be Palance and his fellow patients. He shares his delusion with three other inmates and during a convenient blackout, they make their escape from the hospital. The mental patients are soon cruising down the road in a stolen van, searching for Shultz and his family in the chaos caused by the blackout.

It’s easiest to call “Alone in the Dark” a slasher film but that doesn’t quite convey the weirdness and ambition that went into this movie. It begins as a parody of new age psychiatry, switches to a wacky, gritty action-comedy about three lunatics loose in a riot and finishes up as a family home invasion movie in the style of “Cape Fear”. It doesn’t hurt that two of the killers are played by Oscar-winning actors in full-on scenery chewing mode. Palance is appropriately menacing and charismatic and it’s a delight to watch Martin Landau spout bible verses as he gives people the crazy eye. In one of the film’s most memorable scenes, immortalized in the VHS-era clip documentary “Terror in Aisles”, Landau spots a mailman on a bicycle and says, “I want that hat.” Palance then swerves his Ford Econoline close enough to knock the mailman off the bicycle before gunning the engine in reverse to run him over. Spoiler alert: Landau gets the hat.

Another unique touch in this movie is the character of the fourth psycho, nicknamed “The Bleeder”. His face is hidden throughout the first half to set up a payoff that should be obvious to anyone familiar with genre conventions. The Bleeder is so named because when he kills he gets spontaneous nosebleeds. One of his most notable scenes comes when the escapees are raiding a sporting goods store for clothes and weapons. Determined on hiding his face, the Bleeder puts on a hockey mask in what seems at first like a tribute to the “Friday the 13th” franchise. It’s not a tribute, though, it’s just a bizarre coincidence because “Alone in the Dark” was released within a few months of “Friday the 13th Part 3”, the first movie where Jason Vorhees dons the mask. It’s a neat footnote in horror trivia and the sight of blood gushing out of the nose holes of the mask after the Bleeder does his business is an interesting different take on a now-iconic image.

“Alone in the Dark” comes from the era when slasher movies were still establishing the tropes of the genre and so it only bears a faint resemblance to the more familiar movies that came later. It was clearly much more ambitious than its peers with its satirical edge, over-qualified cast and willingness to step over the edge into full-bore weirdness. It is a goofy 80s slasher movie but it’s hard to beat the fun of watching highly gifted actors ham it up in pulpy B-movie roles. Packed with quotable lines, memorable scenes and great performances, “Alone in the Dark” is a VHS gem that deserves a higher profile.