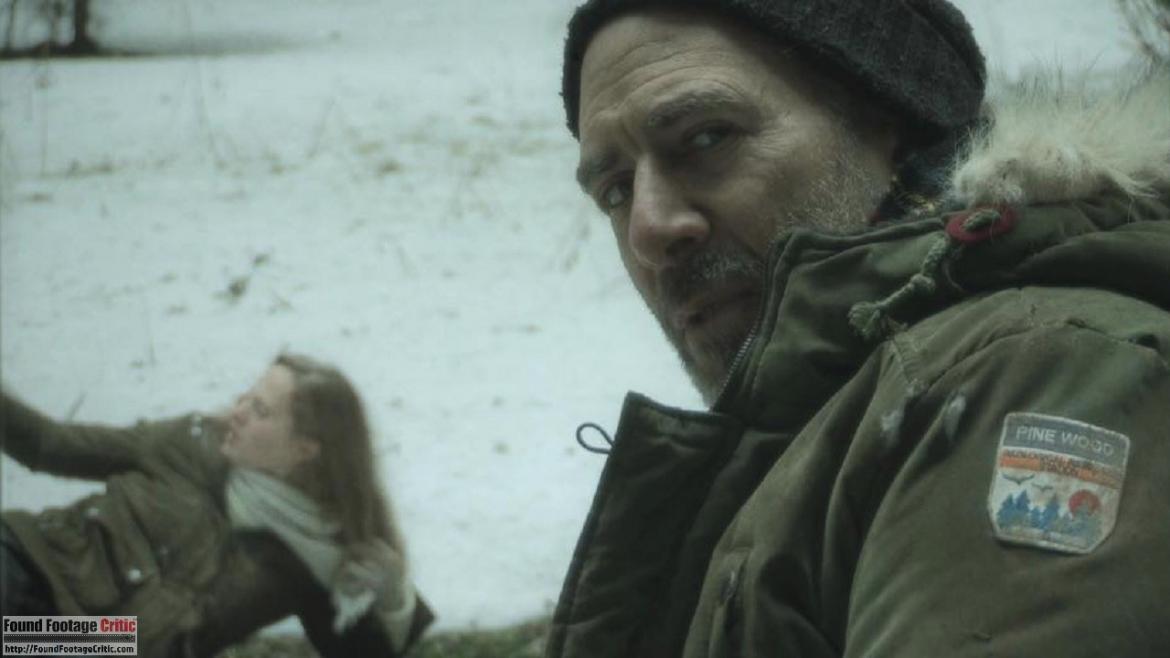 The pantheon of found-footage has run the gamut and fresh perspectives seem to be hard to come by. Unexpectedly, the deepest mine of the sub-genre lies in the past as a slew of period piece films have found ways to make a somewhat stale and increasingly gimmicky style feel new; The Devil's Doorway for example. Cold Ground is the latest to adopt an antiquated style. The film uses it to a surprisingly effective degree, even if it also requires viewers to come armed with a handful of Dramamine.

Set in 1976 as a pair of French journalists travel to the French/Swiss border to film a series investigating cattle mutilations for a TV show. However what begins as speculation of a potential biochemical concern quickly becomes a fight for survival as the team finds themselves besieged by shrieking nocturnal creatures. If that's not enough, the cold and treacherous conditions of the mountain they are navigating prove to be equally dangerous.

Like most found-footage movies audiences expect a fair bit of shaky cam. However, Cold Ground amplifies it's dizzying camera work the further into the action we get, making The Blair Witch Project look as if it were shot entirely on the sturdiest tripod you ever laid eyes on. In fact, this ought to be a breath of fresh air for anyone who's ever complained that the people in found-footage movies always seem to capture the perfect shot at just the right time. Cold Ground loves to give you split second glimpses of the creatures stalking the snow covered terrain without revealing what the characters are running from. This is perhaps for the better as shots of the creature attacks have some shoddy CGI to enhance their speed. What you can see tends to have a crude Halloween costume vibe.

Where the film really succeeds is in sound design and shockingly in its degraded cinematography. Its time period requires a dated feel and its washed out color scheme and grainy presentation give some of the shots a unique atmosphere. The natural lighting at night combined with the sound of the creatures echoing in the distance is effectively eerie.

Many of Cold Ground's aspects are admirable due to the obvious shoestring budget (some of which came from an Indiegogo campaign that raised under $3,000 of its $12,000 goal back is 2014). Admirable if only because it's easy to see where the filmmakers are trying to be resourceful and still deliver a chilly creature feature. The creatures are effective in spite of the camera's inability to capture them to a meaningful degree. The use of found-footage chaos is disorienting, which may actually be more to the film's credit than detriment. The director, Fabien Delage, takes some chances, delivering a very effective avalanche that uses some dodgy CGI, but the buildup and sound design are utlized to great effect in the constraints of found-footage.

Look, Cold Ground isn't going to turn heads due to innovation in the genre, but if you're in the mood for a found-footage yarn that's admirable in an "aww, at least they're trying" way, then you could do worse. That statement likely falls in a category beneath even the most tepid of praise, but credit where credit is due. Cold Ground's chills don't come solely from its snowy setting and for that it's bound to have an audience that needs a nonchalant nudge in the right direction to seek it out.