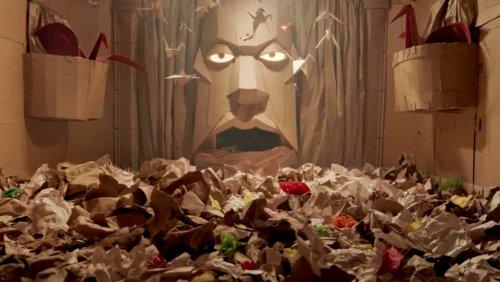 Dave Made a Maze (Movie Review)

There is a brilliant mind at work throughout the quirky and irreverent silliness that is Dave Made a Maze. Director Bill Watterson has undeniably constructed a cardboard classic in the making with a foundation that's far more stable than its raw materials.

Working out of the magic that is pure imagination Dave Made a Maze works from a place of childlike wonderment where, what if you made a maze out of cardboard boxes and all your imaginative ideas came alive and took on a life of their own. Picture an Amblin-esque adventure conceived by the minds over at Adult Swim. Dave (Nick Thune), a struggling artist builds a cardboard labyrinth in the living room of his apartment. Claiming the inside is much bigger than it seems and that he's lost his girlfriend, Annie (Meera Rohit Kumbhani) along with a crowd of curious spectators (including Dave's best friend, Gordon (Adam Busch) and a documentary crew) enter the structure only to find that Dave's claims are true. They must navigate the cardboard maze to escape the ever changing landscape while also outrunning a bloodthirsty Minotaur.

Wait...a Minotaur?! Yes...a Minotaur. Dave Made a Maze is a moving target of genre adjacent fantasy elements and comedy. The world within the seemingly small fort that Dave has constructed is operating under the magic of his imagination and includes origami creatures, booby traps, the aforementioned Minotaur, and even a paper demon who REALLY wants a high five. The film's quirky sense of humor might be a bit much for some, but it caters to and rewards the audience it's intended for around every corner.

Even the DIY nature of entire set-pieces built from cardboard have a whimsical look and feel as opposed to "The Hobo's Guide to Interior Decorating". Characters die and spew red yarn and scraps of red construction paper from their various wounds, adding to Watterson's unique vision. Perhaps the weakest element is that even at 80 minutes the story starts to drag in the finale, but the script written by Steven Sears and co-written by Watterson revs up the weird and keeps the comedy cranked up never stopping to let the audience even think about taking this too seriously.

Watterson's surprisingly astute direction for a first-timer and a light-hearted script give this world the delightful boost it needs. Dave Made a Maze will likely join a pantheon of films under appreciated for their bizarre and perceived gimmick, but should ultimately find solace years from now as an endearing cult classic.