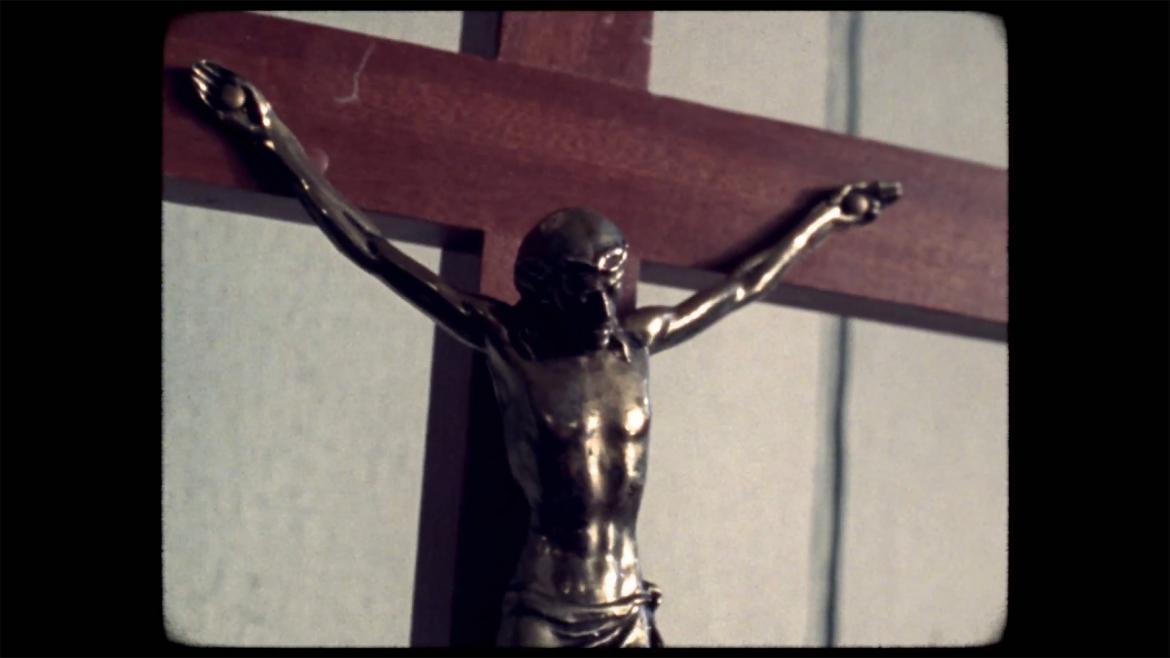 Religion almost always takes one to the chin in any horror movie that decides to use it as a tool. The Devil's Doorway is no exception. Female filmmaker Aislinn Clarke doesn't just throw a wicked haymaker at the long dark history of religion that no one wants to talk about, but drop-kicks it in its tender bits on the way down.

Clarke smartly stages her spookshow with a simple premise--an aging priest, Father Thomas (Lalor Roddy) and a young idealist priest Father John (Ciaran Flynn) are sent to an establishment housing former prostitutes and single pregnant women run by nuns. The priests are there to investigate claims of a miracle; a statue of Mary crying tears of blood. Through the course of their investigation the most alarming thing the two witness is the treatment of the women by the Mother Superior (Helen Bereen), which opens the door to even more sinister happenings. The investigation into the bleeding statue leads the protagonists to a young pregnant woman in the basement who is essentially the anchor of the film's second and third act. Around it all is a non-stop barrage of creepy sound design, jump scares, and striking imagery.

Taking place in the 1960's gives the found footage a grainy quality and sound glitches that add tremendously to the atmosphere. Though it is still one of those found footage movies that the Vatican was so kind to add a creepy score to so that we know when scary stuff is or is about to go down. The existence of convenient music in a found-footage movie is always a slight annoyance which is distracting from the conceit, but The Devil's Doorway gets a pass only for the fact that it's actually fairly effective even if it's unnecessary.

Roddy and Bereen anchor the film's performances as a pair of religious figures that have a disdain for their occupation. Bereen on more than one occasion roasts the church for their dirty deeds and seedy practices which is only affirmed on Roddy's end as a priest who is jaded by his job and no longer sees wonder or purpose in his work. Father Thomas is fully realized as a road weary priest who has long been worn out by the constant disappoint in the church and the endless amount of "miracles" he's proven were frauds. Father John on the other hand is experiencing a frightening number of supernatural happenings that Father Thomas shrugs off and since it's the 1960's Father John has no way to roll the footage he's captured to try to sway the ole curmudgeon. Clarke and her co-writers Martin Brennan and Michael B. Jackson write their way in and out of some convenient situations which pave the way for some effectively creepy sequences, while also leaving some scenes to be a bit perplexing as to their intention. Even still, the edgy religious/political stance within the characters and their dialogue is on point and supremely effective for the development of the story.

While most supernatural/possession/ghost stories gradually build to a crescendo of spooky moneyshots, The Devil's Doorway says F that, we're just gonna throw sh*t at you and these characters every chance we get. And throw sh*t they do (but not literally). Clarke's movie is jam-packed with pale white kids jumping from being curtains that manifest bloody handprints, levitating possessed patients, slamming doors, ominous ancient latin whisperings, dark hallways with people yelling in the distance...you name it, this movie probably has it, almost to a fault. The film throws at the wall so many of the tropes we've come to expect that for everyone one that lands there's one that sticks out like a sore thumb. But there's nary a moment to sit and contemplate why it doesn't work before the next jump scare comes and you're back on board and pulled back in by the whip sharp writing.

The Devil's Doorway takes a surprisingly fresh and unique approach to the found-footage style. It's 16mm presentation provides an astonishing layer of atmosphere to the typical shaky cam gimmicks. The sheer amount of intense scares combined with an effective (yet still needless) score helps to deliver one of the most deserving films to earn the right to boast that it has revitalized what had become a fairly stale sub-genre. After all, the Vatican went to great lengths to conceal this footage just so they could make it look and sound all pretty for us.