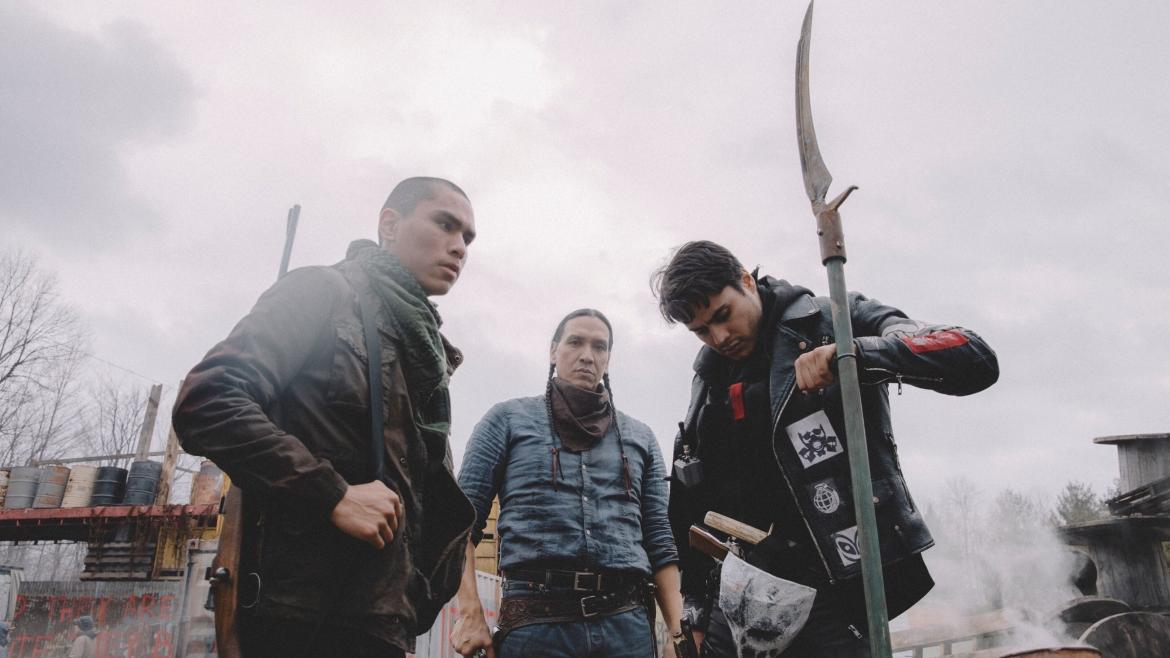 In the Mi’kmaq reservation of Red Crow things are starting to get weird. Salmon plucked from the river are putting up a fight much, much longer than usual and the same is true of a sick dog. Traylor (Michael Greyeyes), a sheriff on the reservation, and his estranged wife Joss (Elle-Máijá Tailfeathers), a nurse in the local hospital, have other issues to deal with. Their son Joseph (Forrest Goodluck) and his half-brother by Traylor, Lysol (Kiowa Gordon), are currently in a holding cell in the town across the river sleeping it off. When Traylor goes to retrieve the boys, the day goes from weird to unfathomable as their cell mate attacks them, biting Joseph on the arm. In short order the town descends into zombie chaos as dead residents reanimate and seek living people to visit violence upon.

But, you’re a zombie movie aficionado and you’re waiting for the shoe to drop on Joseph's bite, right? Cut to 6 months later and we learn the Mi’kmaq people are immune to...whatever is causing all this. Traylor has become the de facto leader overseeing the security of the reservation. Flanked by his father Gisigu (Stonehorse Lone Goeman), friend Bumper (Brandon Oakes), and his sons, the reservation observes a strict, draconian quarantine procedure.

Jeff Barnaby’s Blood Quantum is that special kind of speculative fiction. The film not only provides genre fans the invententive and the familiar but it also turns an essential critical lens on how the dispossessed protagonists have internalized generations upon generations of state sanctioned violence. Following the jump in time, we witness how factions have developed in the reservation. Essentially, however, Barnaby walks the fraught line of making each methodology relatable. When Lysol appears on screen kitted out with leather, more knives than he could possibly handle, and a Jason Vorhees hockey mask, it strains our credulity. Shortly after though we witness why Lysol ended up in the holding cell in the first place. Told in flashback as Lysol snorts and drinks we see why he still has an axe to grind, slowly slurring his speech but never dulling the memory.

This dynamic is further accentuated in the film’s use of the complex, real world concept of “Blood Quantum”. (It must be said I am a white, U.S. based writer. Check out Adam’s In Extremis for more background here). As more refugees from the outside world seek safety in Red Crow, Traylor and the others face the grim reality that they don’t know how or why they are immune. Soon the conversation is focused on lineages as the birth of Joseph’s child with his girlfriend Charlie (Olivia Scriven) is imminent. Does it matter if Joseph is the son of indigenious parents and Charlie is white? The question is much less important to Barnaby than the fallout of that question. We witness the path this question sets the characters on, and in the film’s closing moments Barnaby provides hope in despair.

The power of Barnaby’s film is not in a so-called inversion of contemporary representations of refugee stories but in the filmmaker’s ability to craft a complex, textured exploration of the effects of generational violence. Entertaining, provocative, and visually arresting, Blood Quantum shows there’s still potential in zombie narratives.

Check out our interviews with Michael Greyeyes here and Elle-Máijá Tailfeathers here.