Diary of the Dead (Movie Review) 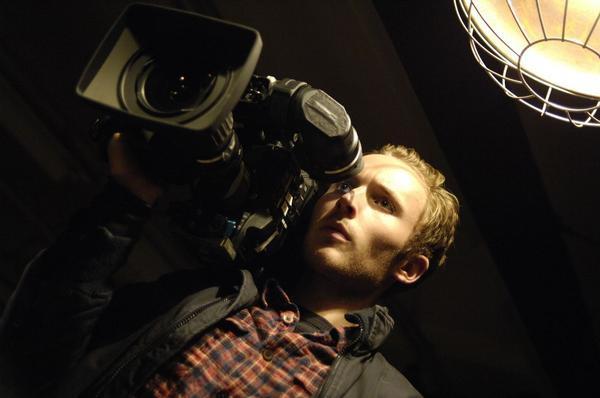 Without a doubt, George Romero is horror royalty. Storming onto the scene in 1968 with a film as transformative of the genre as any to this day, Romero has woven a variety of genre tales featuring everything from witches to vampires to post-apocalyptic motorcycle jousters. But the director never truly seems as comfortable as he does when he's working with his muses, the walking dead. For the second time in three years, Romero has returned to this wellspring of inspiration with "Diary of the Dead." Sadly, his latest effort proves that for this old master, that well may finally be dry.

This new film is something of a restart for the "Dead" series, as "Diary" opens in a world before the fall. Our entry point is a woman's voiceover, a device that will become very strained, very quickly. The voice is that of Debra, a student at Pitt, who along with her boyfriend Jason and a crew of student filmmakers, will try to make her way across Pennsylvania to find her family and escape the rising tide of flesh-hungry dead.

Debra explains in that opening scene that these young filmmakers shot virtually everything we are about to see. The students had been making a horror film for school, but when reality itself becomes horrifying and the authorities begin to report an outbreak of the dead rising to attack the living, the crew takes it upon itself to document--that is to say, "to shoot"--everything. For see, Jason, the director of this student project had actually wanted to be a documentarian; horror it would seem was just something easy to help boost that GPA.

It becomes clear very quickly just how enamored Romero is with this idea of a film within the film. As the story unfolds, a pattern emerges. Typically two cameras shoot the action in a vérité style, and we progress from set piece to set piece, while the scenes are edited together after the fact by Debra who provides stilted narration over top of found footage of real world horror. Romero hammers home his point early and often, making it clear that in "Diary," the dead are not necessarily what we have to fear.

What is unclear exactly is what it is Romero thinks we should be worried about. Throughout the film, the characters, virtually all of whom seemed to have wandered into a movie with little to no idea of this wild craft called "acting," continually bicker with one another about shallow philosophic concepts. To this end, Romero hits us over the head with several of trite quotables like: "If it's not on camera, then it didn't happen." But it's hard to ever decide what his point is: on the one hand, the news is nothing but lies--lies told to sell soap (or something). On the other hand, Debra's voiceover harps constantly on the fact that when everyone has a camera and a blog, then everyone can have an opinion, which makes it hard to ever discern truth from fiction.

Romero's film, or perhaps more accurately, Debra's film within Romero's film stands as the final, and ambiguous truth. It's unfortunate then that the final product is such a massive mess. If we are to believe that Debra edited together all the group's footage, then we must also come to the conclusion that she is the worst editor ever to cut a movie. Romero inserts many unnecessary jump cuts, and at no point is a cohesive, engaging narrative allowed to emerge.

That may have been his goal, to keep the audience outside of the film, watching the characters shoot and then interpret the action. But it could also be that Romero felt that the process itself would engage us; we get several scenes of filmmaking happening on film, and an unbearable amount of Debra explaining the process. This process doesn't engage us, and instead what we are left with is a film in which the titular monsters--the dead--have been pushed to the side, brought out every once in a while to drive the plot forward, but all the while portrayed as a more manifest and obvious symbol than they have ever been.

"Diary" ends up feeling more like a crotchety old man's editorial to the local paper than it does a true horror movie. The film's final moments strongly imply a sequel is on the way (and indeed it already appears on Romero's IMDB page). For everyone's sake, let's hope the old guy got all the righteous indignation out of his system on the first pass.

Night of the Comet