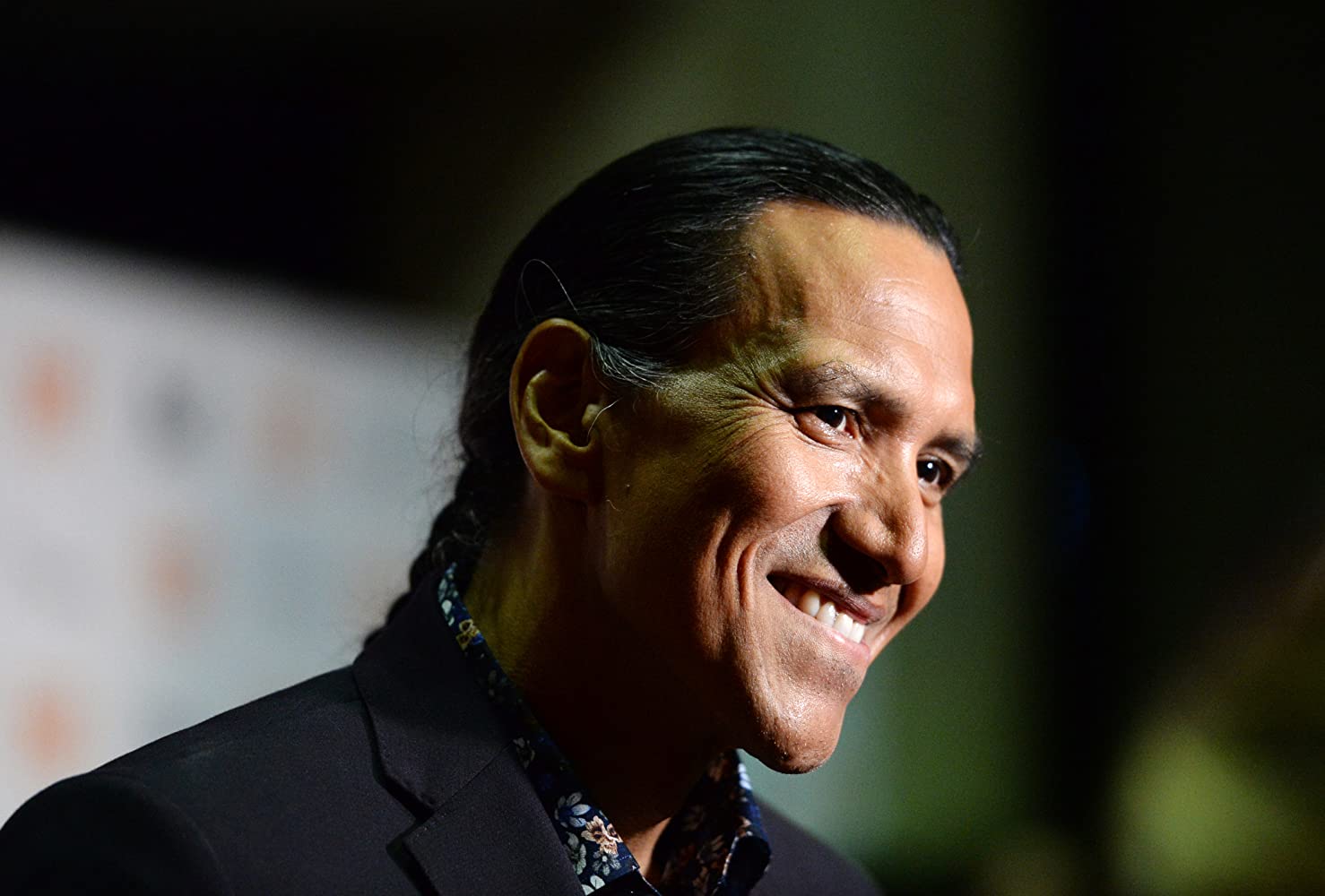 Jayson speaks with Michael Greyeyes about his starring role in Blood Quantum, what the film has to say about indigenous identity, and his love for genre. Stay tuned for our interview with co-star Elle-Máijá Tailfeathers.

Blood Quantum is now available on VOD, Digital HD, DVD and Blu-ray from SHUDDER/RLJE Films. Plot details for the film are discussed below.

Jayson (BGH): In Blood Quantum you play Traylor and when we first meet him, he’s sort of a broken man. He’s feeling pressure from all angles. From both of his sons, his ex, his job; perhaps some of his own doing. Can you tell me a little about your approach to this character with all these external pressures on him?

Michael Greyeyes (MG):  Oh yeah, I’m so glad you noticed that. He’s a classic put upon hero; like life is sort of grinding this guy down. He’s a shitty dad and a pretty lackluster sheriff. He lives in the shadow of his much cooler dad [Stonehorse Lone Goeman] and grandfather to his two sons [Forrest Goodluck, Kiowa Gordon]. His marriage is in shambles. He’s literally almost like an anti-hero and if you look at the structure of the film, there’s really two films. There’s the film before the outbreak and then there’s the aftermath and I get to play two characters.

Amazingly, despite being this put upon guy -- this guy who doesn’t seem to have direction or purpose in life -- he finds this inner hero only when the world actually collapses. He’s better suited to the post-apocalyptic life than the regular world. So I loved playing two halves of this guy and his complexities, certainly with his wife [Elle-Máijá Tailfeathers] and the immense complexities of dealing with his two sons because they are reflections of him. The good and the bad.

BGH: As you mentioned, this is kind of a film in two parts. And Traylor is also a character in two parts. What do you think it is about Traylor, or maybe his world, that he thrives in the Apocalypse perhaps better than the current world?

MG: I love that question because Jeff [Barnaby] our writer and director recently tweeted something I loved. This futurism supposes that the apocalypse has already happened and what we are talking about is the colonial project and the decimation that followed over the next hundreds of years. And through that we are sort of hijacking this high concept sci-fi horror to unpack our history, unpack our history of colonization, and unpack our villainization.

For me, what Traylor allowed me to play was this sort of three dimensional character audiences don’t see often when they look at indigenous representation. Not because of the actors but often because of the writers, because the writing comes from outside of our community. I’ve been really fortunate in the past, say five years. Scripts have really changed and embraced that complexity. Like the complexity of being a bad father.

There was a time when that may have been more typical to play because it was perpetuating stereotypes about our community. But in Jeff’s hands, and in the hands of artists like him, we understand the context quite clearly so these aren’t stereotypes. These are actually vivid portraits of people that we know and we see in our lives every day. 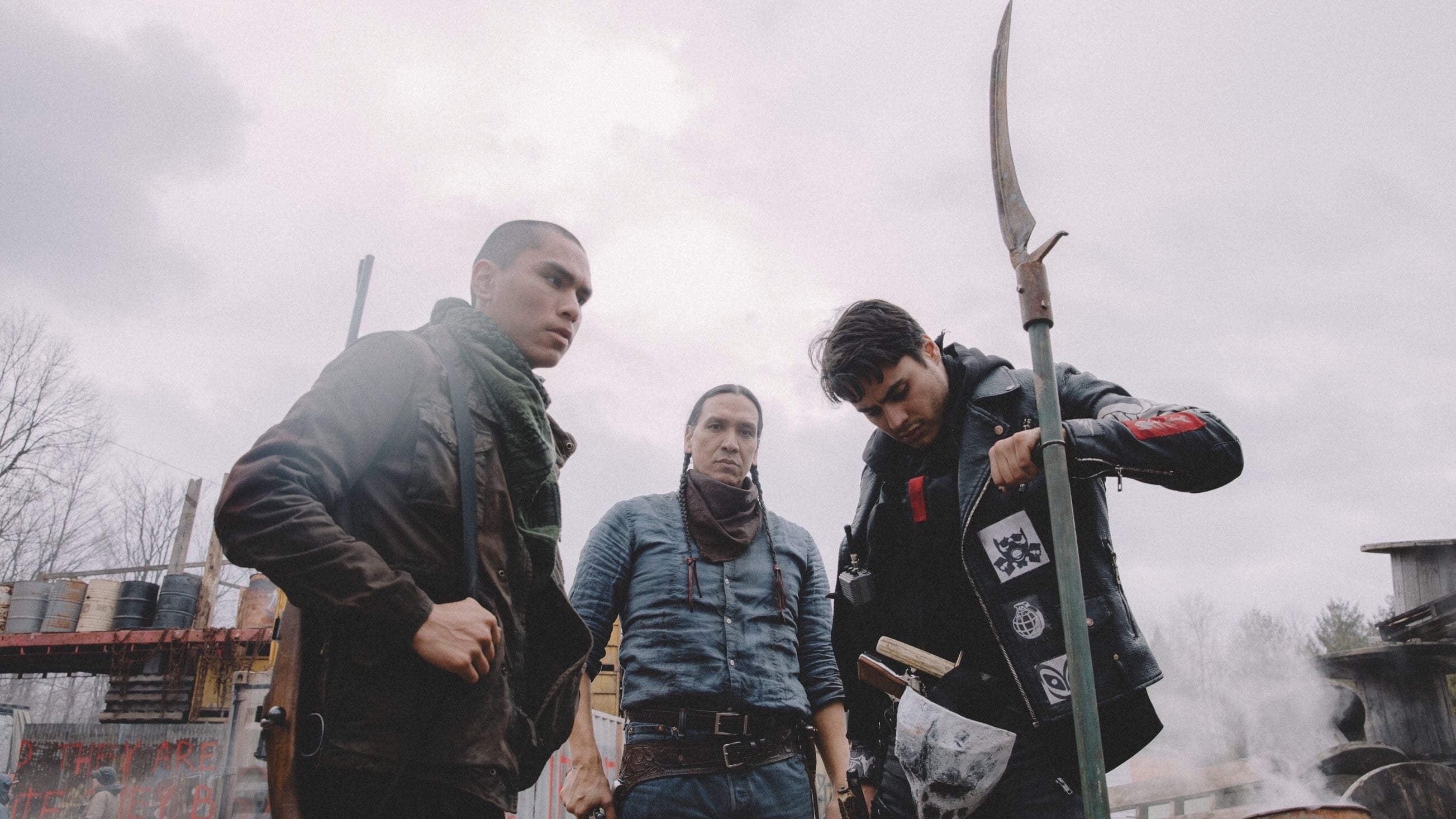 BGH: Blood Quantum of course is a concept with a complicated history that relates to the heritage of indigenous people. I’d love it if you’d talk about how you think this film illuminates and tackles this and other difficult subject matter in a genre setting.

MG: I love the provocation of our title, “Blood Quantum.”

First of all, a lot of people don’t really know what that means. And Blood Quantum was terminology born of racist governmental policy in which they sought to define us by how much “Indian blood” we had. This was just another genocidal and divisive practice by governments outside our community to limit our membership, limit our movement, limit our freedoms and help police us.

Jeff of course, uses the title to provoke. But, at the same time reveal the beautiful premise of this film that indigenous people are immune. They’re immune to the zombie plague. So, all of sudden this isolation, this idea of our blood as a marker of our indigeneity is turned on its ass. And all of a sudden now we’re wondering how much native blood keeps me safe. You know, like if I’m half do I have a fifty percent chance of becoming infected.

So now these same types of questions, these questions of survival, get tied up in the notion of Blood Quantum which never came from us anyway. So Jeff of course plays with it beautifully and turns it inside out.

BGH: With your experience with Jeff on set, how did he help you specifically shape your character in the film?

He said, ‘what’s the difference that it’s the end of the world?’ People are still surviving regardless. So that really helped shape how I approached Traylor, certainly in the second half of the movie. Because there was a sort of grim practicality to how he approached everything. In that first scene [following the outbreak] when there are some refugees coming in and there’s a little girl who is infected. What do we do? And he’s like, you just take care of business and so [Traylor] does, shockingly. And we go, ‘oh, that’s what’s changed.’ The grim reality of being a survivor in a strange way allowed Traylor to become a hero that he couldn’t find in his old life.

BGH: This of course is not your first experience in the zombie genre as you’ve had a role in Fear the Walking Dead (2017). Is there something that brings you back to that genre in particular?

MG: I love coming back to genre. Certainly the zombie genre. First of all, you have a talented and visionary director. But I love the genre to start with. I watched The Walking Dead, I collect DVDs, I watch obscure zombie films. I will stay up to 3am to watch something that I have seen five times because, you know I’m into it. Train to Busan, The Horde, The Battery. You name it, I’ll watch it. So you know, for me it was sort of a win/win situation. I was able to dive into a genre that I love, that I respect and at the same time work with a visionary director that I always wanted to work with.

BGH: To dive into these genre elements a bit, there is an incredible scene near the halfway mark with a chainsaw and an ambulance which is as memorable a scene as I can think of in recent horror. Can you talk about how that scene played out on set?

MG: Oh yeah, oh yeah, yeah. So this scene. This is really the climax of the first half of the film in which we watch with the grim realization, ‘oh, my god this thing is falling apart around us.’ Then there’s this scene on a bridge. And of course, Jeff loves practical effects, he was sort of weaned on the horror movies of the 80s and 90s. So, we have this practical effect with this body and a chainsaw.

Already I’m like, ‘sign me up!’ Because it was bloody. We’re talking buckets of blood. And it was a cold, cold, night. We were filming on the border of Quebec and New Brunswick and I just remember this was the miserable ditch digging part of filmmaking. But when I saw it finally cut together with slow motion, the insert, all of a sudden the terror of this zombie leaping out of an ambulance and tackling me to the ground and I was doing everything I could not to get my face torn off and all of a sudden Bumper (Brandon Oakes) comes in to save the day with a chainsaw.

The audience when we screened the film at [TIFF] Midnight Madness they went bonkers. It was so fantastic! I’m so happy that I could be part of a moment like that, a cinematic moment. I’ll remember that for a long time.