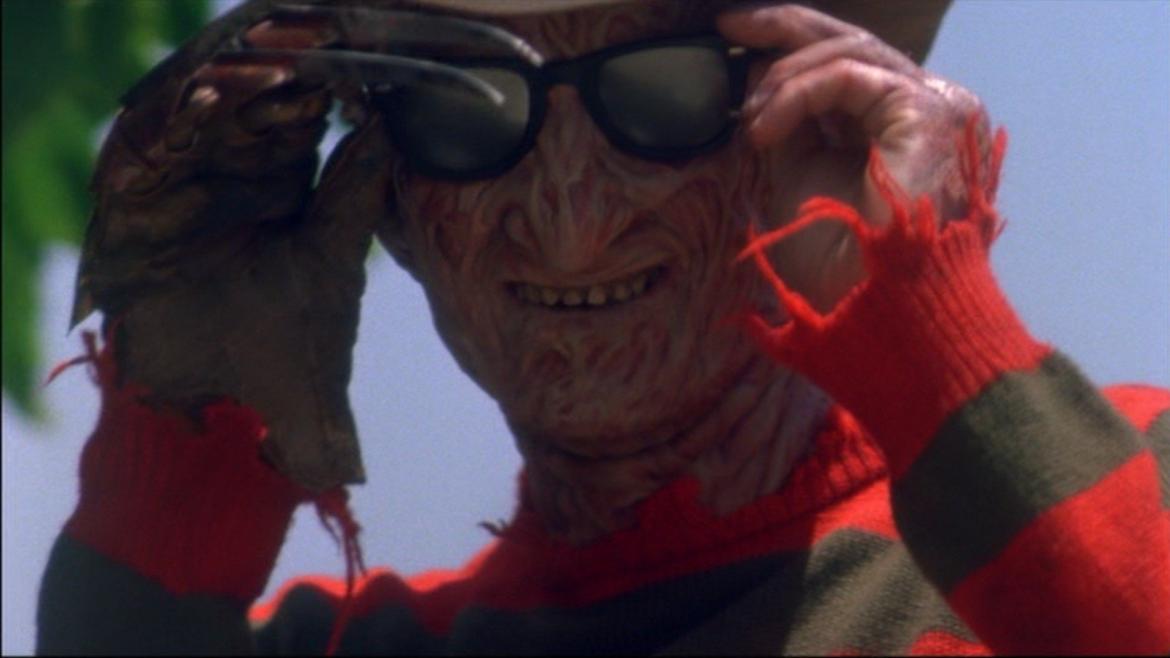 A Nightmare on Elm Street 4: The Dream Master (Movie Review)

This is the fourth installment of our head-to-head review between the Nightmare on Elm Street and Friday the 13th franchises. Check out what Evan had to say about the corresponding Jason pic here!

Another year, another Nightmare. The villain that Wes Craven brought to life back in 1984 was proving to be a money maker for New Line Cinema and they were cranking movies out as quickly as they could. In this, the fourth chapter of the story, Freddy is back in action but there is a bit of a hitch in the story. Of the four major slasher villains of the era (Michael, Jason, and Leatherface being the other three) Freddy’s motivations seem to be the most clearly explained. After he was cleared of a series of child murders on a legal technicality, a group of neighborhood parents decided to take justice into their own hands to keep their offspring safe and they burned Freddy alive. Years later, Krueger is back and seeking his revenge on the parents by targeting their now teen-aged children. And here enlies the problem. The pool of potential victims is shrinking with each and every kill. You may remember that in Dream Warriors, Nancy tells the group of teen patients inhabiting a small psychiatric ward at the local hospital that they have more in common than their undiagnosable sleep problems - they are the last of the Elm Street children.

Now, some of those kids did survive that movie, and it is with them that we pick back up. After a supremely 80’s opening that includes not only a Bible verse but an original song called “Running From This Nightmare”, we suddenly find ourselves in the dream world with Kristen (no longer played by Patricia Arquette, but Tuesday Knight). Kristen pulls Kincaid and Joey into her dream, insisting that they haven’t seen the last of Freddy, but the boys are less than sympathetic. In the real world, the three survivors of Freddy’s attacks on the hospital are all struggling to get back to their normal lives in Springwood, but it isn’t long before Freddy makes his presence known. When Kristen accidentally pulls her friend Alice into her dream, she unwittingly starts a chain reaction, creating a bridge for Freddy to reach new victims.

With a new means of selection established, what had become the constraints of Freddy's origin story are done away with and we can get back to the killing. Whenever Alice falls asleep, people around her start to die. Admittedly, this new technique is a little clunky at times, and the rules are pretty ill-defined. For example, there seems to be an element of control now wherein Freddy can manipulate who falls asleep and when. Every time Alice starts dreaming it is unclear whether her friends are asleep as well, and in several situations it makes no sense for them to be. Furthermore, there is an element of Alice absorbing characteristics of the dead that doesn’t make a lick of sense (creepy Freddy tongue pun intended) and the writers never do much to explain it. And speaking of Freddy’s tongue, with this new movie, the weird sexual undertones of Freddy’s menace continue to flow pretty heavily, particularly in Shelia’s death.

It should come as no surprise that, with infamous director Renny Harlin at the helm, this movie would be a bit of a mess. With such titles as Deep Blue Sea and 12 Rounds (the movie in which John Cena seeminly fights the city of New Orleans) under his belt, Harlin is no stranger to criticism. Add to that that this was relatively early on in his career and that should get your expectations about where they need to be. Despite the fact that The Dream Master goes back to basics as far as format - moving out of the isolated ward and back into a high school setting, not to mention bringing parents back into the picture - this installment struggles in fits and starts and feels all the way through like it’s trying to catch back up to something that has already long passed it by. Alice’s character arc is not nearly as well thought out as Nancy’s was in the first movie, and coming from a non-Nancy fan, that’s saying something. All together, the plot feels like nothing more than a flimsy excuse to string together the kills which are pretty hit or miss themselves. There are a few notable exceptions that almost make it worth while, to be sure, but when you have not one but three characters killed by a stab from Freddy’s glove to the stomach, you’re more equipped for a drinking game than an original viewing experience.

Most Creative Kill: I had a real tough call on my hands this week**, but the title has to go to Joey's waterbed death. If you saw Dream Warriors, you may remember that Joey is not only a horny teenager, but seems to have bad luck with beds. After Freddy uses a sexy nurse to seduce him and ties him to an empty bedframe over the mouth of hell in the last movie, you'd think Joey would be a little more careful. Well, you would be wrong. While luxuriating in his waterbed, Joey feels something beneath him. He pulls back the sheets to see a beautiful, naked, woman swimming within his mattress and beckoning to him. As he reaches for her, however, she disappears, only to be replaced by Freddy who pulls Joey into the mattress and drowns him, but not before stabbing him in the gut for good measure (take a shot).

**Honorable mention goes to Freddy's undoing in this movie. After bringing back the visual of victims' souls writhing around under Freddy's skin, Alice turns the souls against Freddy and they rip him apart from the inside out. Perfect blend of hokey and icky!

Movies Like A Nightmare on Elm Street 4: The Dream Master