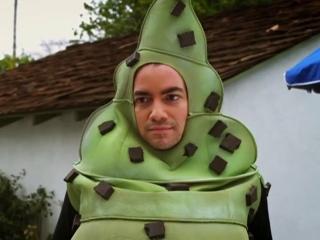 I love horror-comedies. You probably do too. We all do, right? There are few movie-watching experiences that can top the pure demented joy of a horror-comedy that just nails it. The thing is, for every Sam Raimi or Nick Frost there’s about five or ten whoever-it-is-who-directed-Stan-Helsings. It’s just not an easy genre to pull off.

At first glance, “Some Guy Who Kills People” seems like it has a lot going from it. The title is a little on the nose but it could work as an irreverent deconstruction of the slasher archetype. The cast is full of the kind of reliable character actors whose names you might not know but who you probably really liked in that one movie or tv show. Best of all, up above the title is a name that comes with some serious horror-comedy credentials – Executive Producer John Landis. It sounds like it could end up being a fun little movie until you look a little closer and realize that it was directed by the guy who made “Mega Shark vs Giant Octopus” and “Wild Things 2”. It’s almost certainly a step up from his previous work, but “Some Guy Who Kills People” is just another in a long line of botched horror-comedy.

Kevin Corrigan stars as a recently released mental patient who currently works a dead-end job at an ice cream parlor. Back in high school he was a promising cartoonist but that ended with a traumatic run-in with some bullies on the basketball team (which, of course, is repeatedly rendered in flashback form throughout the movie). Now he’s out of the asylum but he still has revenge on his mind and it’s not long before his high school tormentors start ending up dead. As the bodies pile up, he also finds himself reconnecting with his young daughter who he hasn’t seen since she was born.

After a career of playing best friends and brothers it’s great to see Kevin Corrigan in a leading role. He’s believable and relatable as a world-weary sad sack, and he makes it easy to root for him as he gets to know his daughter while he simultaneously plots bloody revenge on his enemies. In fact, the whole cast is pretty great from Karen Black as his overbearing mother to Barry Bostwick as the off-kilter small-town sheriff to Ariel Gade, who, as his daughter, is remarkably unannoying in a role which easily could have gone the other way.

It’s the script that ultimately does “Some Guy Who Kills People” in. It doesn’t matter how engaging and talented the cast is, no movie can survive with dialogue so clunky and a plot built out of so many contrivances. Most unforgivably, there’s a twist at the end that is so stupid it retroactively destroys most of the good in the 80 minutes preceeding it. It’s a twist that exists only because a certain class of hacky screenwriters think that every movie needs a twist at the end, even if it comes out of absolutely nowhere and makes no sense at all. Without getting into spoiler territory, I’ll just say that the twist takes the only interesting and original part of the movie and completely negates it.

The film also falls into the common trap of horror-comedies, which is that it doesn’t really work as either one. Sure, it tosses in some gore and decapitations as well as Kevin Corrigan dressed up as a giant ice cream cone, but those are more like references to the tropes of horror movies and comedies rather than actual scary or funny scenes. Tonally it’s more like a cross between one of the grislier police procedural tv shows and a quirky small town dramedy. Think “CSI” meets “Gilmore Girls” and you’ve pretty much got the tone of the movie. Much like those shows, it’s a decent enough way to kill some time if you’re channel-surfing and bored, just don’t go expecting anything more. It turns out “Some Guy Who Kills People” isn’t so much a winking, ironic title as it is an indication of just how little thought and effort went into the making of this film.