I've always been a fan of the term "Heebie-Jeebies". It's just a lot of fun to say, hear, and read. Try it yourself. I'll wait. Fun, right? Trent Haaga on the other hand I could take or leave. He created the much discussed "Deadgirl" and has lined up a new film about a small town that comes under attack by a strange monster. The title is "Heebie-Jeebies". I kind of thought that was implied.

Hollywood hot dog (I don't know what that means) Ridley Scott has dropped the bomb that the version of "Prometheus" we will see and enjoy on June 8th will indeed be a director's cut and be edited from his original version. He then goes on to explain that this pretty much happens in every movie ever made and that it's not really a big deal. I'm sorry this is the worst news item I've ever posted.

Jared Harris, who plays the saucy Britt on "Mad Men" has been cast in the upcoming Hammer Horror flick "The Quiet Ones". Harris will play a professor who leads his students in a dangerous experiment trying to produce a poltergeist. Based on the title of the film I assume there are no spoken words. Should be exciting.

"Well, it's a possibility". That's what Bill Murray said in a recent interview when questioned about "Ghostbusters 3". Move along now.

Oh boy oh boy! Amar'e Stoudemire of the New York Knicks if currently in discussions to sign on as an executive producer for the "The Strangers 2". I know, a Basketball player and a horror movie. Sounds like a perfect fit! Maybe some of his teammates can take on the acting roles. It'll be like those episodes of "Saturday Night Live" where an athlete hosts and no one watches.

Ken Levine, creative director of Irrational Games, recently sat down to discuss the much talked about "Bioshock" movie that everyone has pretty much given up on. According to Kenny though there's still a possibility and he'd be happy to see a movie be made. Of course based on the interview it sounds like there is no progress whatsoever but who knows. He then went on to use the word "pieces" so many times that I assume he was sitting in a room with a group of people who had agreed to do a shot every time he said it.

If I heard one consistent comment about Trent Haaga's "Deadgirl" it's that all the necrophilia is great but why isn't the picture quality better?! Well good news, you sick pervert who should be locked up, the 2008 sleepy hit is findings it's way to Blu-Ray on August 30th. For those of you not familiar with the movie it's about a couple of kids who find a living dead girl strapped to a table in an abandoned hospital and eventually end up having sex with her. I immediately regret telling you all that.

It's a slow day and everyone here at the BGH office has already taken off for the weekend so here's another new poster for "Super 8" which leads me to believe they're not even bothering to not make this movie look like "Close Encounters of the Third Kind" anymore. Of course Steve Spielberg is the producer of the J.J. Abrams joint so maybe the two were at a bar one night and Abrams was complaining about Third Kind and Spielberg got sick of it and just said "well you try to make it better, prick!". What the hell do I know though.

Showtime has picked up the rights to "Chew", a new series they'll be putting out based on the comic book of the same name. The show will follow a federal agent who has psychic abilities based on the food he eats. I have absolutely no idea how that works but the idea that the twenty piece McNuggets I just had could predict the lotto numbers is blowing my mind.

"The Taint", "All About Evil" and "Kidnapped" have all been selected for this year's Tromadance Film Fest that will take place from April 22-23 in Asbury Park, NJ. Bill Plympton will also be premiering some new shorts at the event and I assume there's going to be some dancing. Probably a lot of dancing actually. Giant big semi-overweight dancing... Entry is free!

In what might be the most disappointing there I've seen this year there is a new red band trailer for "Nude Nuns with Big Guns" on the tubes. I say disappointing because red band implies there's going to be awesomeness that you can't show in a regular trailer, but this contains none of that. Oh sure there's some blood and I may of even seen a nip but there nothing that lives up to the movie's name. I'm crying right now as I type this.

In response to the rumors surrounding the sequel to "Deadgirl" writer Trent Haaga has taken to his blog to set the record straight. Haaga states that the not only are the rumors that he wrote a script where a group of women find the body of a dead boy are completely false and goes on to say that if a sequel does happen he won't be involved. Truth be told I thought Haaga started these rumors so now I'm completely confused. If you can't trust a guy who writes a movie about necrophilia than who can you trust? 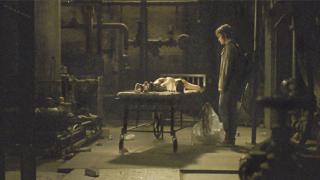 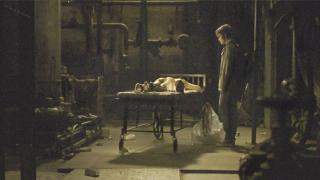