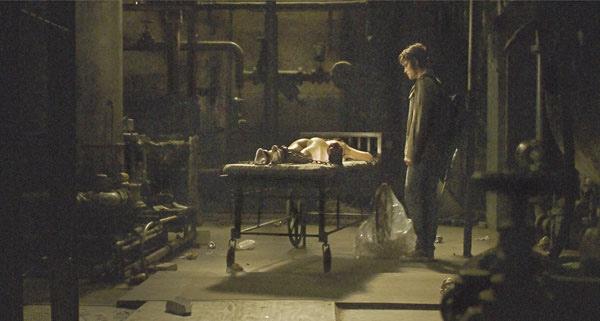 If we compare the zombie craze of the 2000's to the slasher boom of the 80s I think its safe to say that we’re now in the “Jason Takes Manhattan” period. There was a time when I would have scoffed at the notion that I would ever be sick of zombie movies but now that reanimated dead have become an acceptable form of cosplay I greet new zombie films with a sigh. When every other new horror release involves brain-munching, about the only take on zombies we haven’t seen yet is a zombie buddy cop movie, or a movie about tying up zombies and having sex with them. Thanks to “Deadgirl”, we can now mark one of those off the list.

Ricky and JT are two high school losers who decide to skip school in favor of heading down to the old abandoned mental hospital to pursue the two great passions of teenage burnouts– drinking beer and breaking stuff. An encounter with a ferocious dog sends them running into a room containing what appears to be an attractive naked dead girl, bound and gagged and wrapped in plastic. A closer inspection reveals that she is still alive. Ricky wants to leave her there until they decide what to do, while JT has a pretty clear idea as to what he wants to do to her.

When Ricky meets JT at the asylum the next day, JT has made a disturbing discovery. Molesting the semi-comatose girl reanimated her and caused her to start growling and biting. JT began beating her in a way that should have been fatal but she kept struggling. To underline his point, JT takes the gun Ricky has stolen from his dad and shoots the girl three times to no effect. In his mind they’ve found the perfect woman. She’s brainless, speechless, naked and tied to a gurney.

Ricky, on the other hand, is more interested in Joanne, a (living) girl who he has harbored a crush on for years because they kissed once when they were twelve. In classic high school movie form she has moved on to date a jock leaving Ricky to drift along with his slacker friends. As might be expected when teenage boys are involved, JT’s secret deathless sex puppet only stays a secret for a short time and before long things come to a head with a confrontation between the two boys.

The biggest problem with the confrontation, and by extension the movie, is that there’s not really a strong character for the audience to identify with and root for. In fact, every character in the movie is unlikable to some degree. Particularly distasteful is how quickly JT makes the leap from seeing a girl who is tied up and may or may not be alive to deciding that he wants to have sex with her. Teenage boys are notoriously horny but having a character skip over any normal human emotion and immediately start openly discussing necrophilia and rape just feels perverted and far-fetched. This might be excusable if the character was set up as a lone psychopath but he brings other guys in to have their way with the girl and they also seem ready to rape a captive girl covered in bruises and bullet holes without a second thought.

The “good” characters aren’t much better. Ricky is an ineffective wimp who wants to save the girl but never takes the logical step of informing the police or anybody for that matter that he’s found a captive girl or that his friend is using her as a sex slave. His brooding over Joanne lies somewhere between pathetic and stalkerish and his actions at the end of the movie are as morally reprehensible as those of JT.

“Deadgirl” might have been best served as an anthology segment or Masters of Horror episode. At full feature length it suffers from a number of pacing issues. The mix of slow scenes with extreme unpleasantness and a lack of humor or likability makes the movie a bit of a chore to watch at times. There is one funny scene in the middle that attempts to subvert gender stereotypes but it hardly makes up for the lack of any strong female presence in the movie.

Some of the inconsistencies and questionable ethics of “Deadgirl” can be somewhat forgiven on the basis that it is a startlingly original story that is like no other horror movie I’ve seen. It feels closer in tone to a Larry Clark movie than anything in the horror genre. With a few tweaks to the script and a little bit of levity and heart to balance out some of the nastiness, this might have been a truly great and unique film instead of an ambitiously flawed exploitation film that makes you want to rinse your eyes and ears out with Purell afterwards.

This film is probably destined to be as divisive as “Martyrs” or “Inside” due to its non-escapist, legitimately horrifying nature. It’s nowhere near as well-made as either of those films but it is every bit as provocative and twice as perverse. For all its flaws, it is a brand new, never-before-seen take on the zombie movie and I'll take that over yet another shambling horde any day.