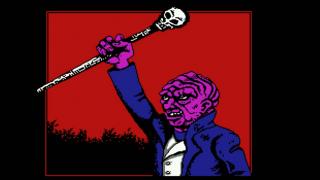 Good signs for the upcoming "Descent" sequel; the MPAA has officially given the film an R rating for strong bloody horror violence, grisly images, terror and language.

Producer Joel Silver is giving weight to the talk of a new "Swamp Thing" film. Among the scare nuggets given in the interview were talks of a 3D version and closer adherence to the Alan Moore comic character versus the Wes Craven rubber suit version.

There's even more zombies coming to your TV, this time in a French feature called "The Horde". The French have had a good track record with horror lately, see if they can live up to the zombie genre with new trailer that was just released.

Saga of the Swamp Thing Book 2

For those of you that think vampires have grown a bit too soft and emo these days, you might be excited to hear that Vinnie Jones has signed on to star in "The Bleeding". Vinnie Jones; vampire hunter? Sounds good to me.

Jesse Eisenberg, star of "Zombieland" is bringing us more horror, this time in a movie called "Camp Hope". No zombies this time around, instead we watch as Jesse faces inherent evil as it invades a children's spiritual retreat! "This one time... at Jesus camp..."

Screenwriter Akiva Golddman, responsible for such films as "I Am Legend" and "Batman and Robin" bring news of a new version of "Swamp Thing" is in development. Goldsmsn explains that they hope to keep the character closer to Alan Moore's comic book creature as opposed to the incarnations we've had so far.

Those of you that were fearing the inevitable announcement of "Scary Movie 5" can put those fears to rest. Instead, you can dredge up a whole new host of fears as the Weinsteins opt to go with a "Scary Movie" reboot. "Scary Movie 1: Again". Nothing snarky here, I'm just going to let that one soak in a bit.