Katrina Bowden from "30 Rock" and "Tucker and Dale Vs. Evil" is the latest hot chick to be added to the cast of "Piranha 3DD". As we all know Gary Busey was also added to the cast last week and while it hasn't been confirmed I think it's pretty obvious that we now know who will be involved in the movie's love story. I'd like to think the chemistry will find it's way off screen as well and we'll have Hollywood's next power couple.

"Cobra the Space Pirate" is some sort of Japanese animated series that I'm sure someone I went to college with told me was "completely insane" while I didn't get any action at a party, and for that reason alone I now hate it. But alas there's a movie being made about it and today we've got our first look at the poster for the flick. If it gets you excited you're only a little over 2 years away from it's summer 2012 release.

If you're anxiously awaiting the release of "Haunted 3D" then you're one step ahead of me because I've never heard of the damn thing until 10 minutes ago. But that doesn't matter because a handful of theaters will be showing India's first 3D flick this coming weekend. Of course none of the selected theaters are in major cities so you big wigs can suck it. Jersey's got 2 of the 8 selected locations!

Starting today you can get your grubby mits on "Call of Duty: Black Ops Escalation - Call of the Dead" via Xbox Live and to celebrate a new poster has hit the tubes for the game. In the Black Ops add on you can actually play as Robert Englund, Danny Trejo, Michael Rooker and Sarah Michelle Gellar and none other than George A. Romero is featured in the game as a zombie. Which is exciting because there's numerous movies I'd love to shoot him in the face for. Score! 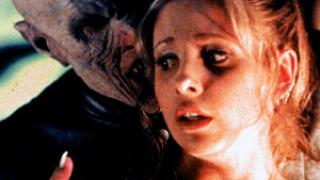 Gellar May Return As Buffy

It looks like we've finally found where the studios draw the line on Sarah Michelle Gellar-starring Asian horror remakes. Her latest, "Possession", is going straight to DVD. You can check that out on May 12th, if that's your kind of thing.

Looks like we spoke too soon on that "Reanimator" remake. Stuart Gordon was so distraught when he heard the news that he called up his long time friend (and purported remake producer) Brian Yuzna to see what was going on. It seems that Yuzna had no idea, and so all of this may be one big crazy misunderstanding. That "Reanimator" TV series though? Still happening. Nothing we can do about that one I guess.

Clive Barker would love to make a "Midnight Meat Train" trilogy, even though he's well aware that it probably won't happen. Lots of other info on his career and upcoming projects at the link.

Even though he was given an "Executive Producer" credit, George Romero has nothing to do with the "Crazies" remake currently filming. He does say though that he recently had a chance to read the script, and that it "has a decent shot of being a good movie".