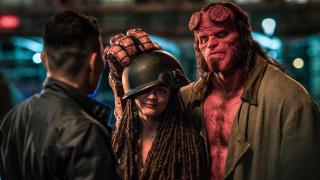 Fans of the first two "Hellboy" films might want to cover up their cereal bowls because I'm about to piss all over your Wheaties. According to Hellboy creator Mike Mignola there's no chance of director Guillermo del Toro ever returning to make a third film. So i guess that does mean a 3rd film could be made without del Toro but who the hell wants to see that. The Canadians maybe but not this guy. Those hockey rioting sickos would probably eat that crap up with ketchup.

For those of you who aren't complete burnouts an can remember all the way back to 2004 you might remember some pretty bold words from Danny Elfman about never working with Sam Raimi again after his experience on "Spiderman 2". Well it looks like the Elf Man has had a change of heart and has signed on to do the score of Sam's new "Wizard of OZ" inspired flick "OZ: The Great and Powerful". So good news for those of you who are still holding out for an Oingo Boingo reunion.

Remember the days when people actually enjoyed Wes Craven's movies? Well I do and you should respect your elders you snotty little smartass. Anyway his 1977 classic film "The Hills Have Eyes" is finally being given the Blu-Ray treatment and will hit shelves on September 6th. So far no word on extras yet but this might be a nice place to record a little apology for "My Soul to Take".

If you're like me then you're still washing your eyes our with soap and water after seeing a Kane Hodder sex scene in "Hatchet 2". But here's a new slasher flick staring the Hodster as a creepy gas station owner who also seems to be obsessed with women titled "Exit 33". The flick has just been given an August 2nd release date and I can't imagine we'll see any hot Hodder action in it but if we do it'll most likely be in a gas station bathroom. Can you imagine what that would smell like?