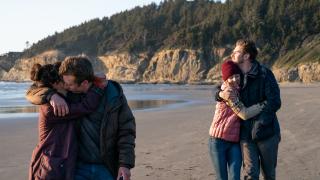 No real surprise here but it looks like " V/H/S", the horror anthology from Adam Wingard, Glenn McQuaid, Radio Silence, David Bruckner, Joe Swanberg and Ti West, has been picked up by Magnolia Pictures. The film tells the story of a group of burglars who discover a bunch of weird videos in a house they're robbing. From the number of directors I assume each story will be about 3 minutes or the movie will be 4 hours long.

If there's one thing you know about me it's that I freakin love Norway. Corpse paint, trolls, and everything in between. Give it to me! So I couldn't be more excited about the trailer for the new film "Thale" . The movie is based on the mythical Norwegian charter Huldra, which is a sassy minx who lures men into the woods. Sounds fun but unfortunately the men never return. Oh and the Huldra has a cow's tail. God I love Norway.

All you really need to know about "Monster Brawl" is that it's a fake Pay-Per-View battle royal between some classic monsters and Jimmy "Mouth Of the South" Hart is in it. Now that I've got you all excited here's the bad news. Image Entertainment has decided to push back the DVD/Blue-Ray release from March 27th to June 12th and unfortunately haven't given a reason. I need a reason! Maybe it's because they're trying to get Bobby "The Brain" Heenan. Let's pray.

I don't know how much you can really believe this but Megan Ellison, founder of Annapurna Films which now owns the rights to "Terminator 5", how promised the next installment in the robot series will indeed be rated R. She let this news out via her twitter account though and I'm not positive but I don't think anything on there will hold up in court.