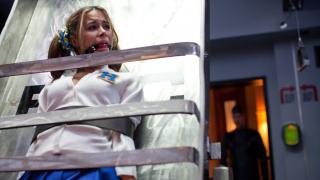 "You're Next" is a new "vacation gone bad because of a bunch of nut jobs" flick that's getting all kinds of giggles and gaggles from the peanut gallery. Yes I know that doesn't make any sense but I'm running out of creative ways to say a movie looks good. Check out the new poster for the flick which features a creepy mask all covered in blood. It'll really make your hog-swallow turn a randy flipgate on a dime.

Word around campus is Mr. Tom Cruise is in discussion to take the lead role in the upcoming flick "We Mortals Are". The movie is being described as "Source Code" but with aliens or as I'll call it a movie I fell asleep watching... with aliens. The film will be directed by Doug Liman and watched by no one.

Yes yes Lars Von Tier said some pretty stupid things but hot hog if his new end of the world flick "Melancholia" doesn't look good. I know I'm surprised by my chipper mood today too. And today we've got a new motion poster for the flick which comes out on 11-11-11. The movie stars Kirsten Dunst who won best actress at Cannes this past May for her role in the flick. Her snaggle tooth took home runner up.

In what might be the most shocking news of the last 15 minutes it looks like "Hostel III" will be heading direct to DVD this coming December. I know I had expected a big Hollywood premier event also. You can probably guess the plot of this one so I'll just tell you it takes place in Vegas. Feel free to do your own awful "Swingers" impressions now.