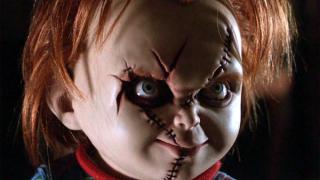 We're back, and so is Chucky!

Let it be heard and make it so my friends. "Curse Of Chucky", the next chapter in the "Child's Play" franchise is officially happening. Casting is just under way but Brad Dourif will be back to voice the little monster and Don Mancini will once again write and direct. It probably goes without saying but if Jennifer Tilly isn't in it I'm probably going to throw a little hissy fit and pound on my keyboard like a child.

I'm just going to come right out and say it. I use to watch "Ally McBeal". Not religiously or anything but when I was in college if it was on I wouldn't turn it off. Now that I've gotten that off my chest let's talk about how Calista Flockhart has joined the cast of the next season of "Dexter". Well at least for one episode. and I don't know what role she'll be playing. Maybe they'll have that dancing baby on too. Man that was adorable.

"I want to try to make the Heat of puppet movies." There's a sentence I never thought I'd read but that's how writer Todd Berger is looking at his new puppet murder mystery film "The Happytime Murders". He also went on to confirm that the film will be full on R-rated material, with all kinds of sex, murder and violence. Again this will all be puppets, but you know there's some sickos out there who probably pay a lot more then the price of a movie ticket to watch puppets do it so this should be exciting news for them.

Just in case you haven't had your morning coffee yet there's apparently a stage version of "The Exorcist" hitting L.A. sometime next month. Now before you go getting all up in arms the thing actually has some real names behind it. Brooke Shields will be playing Regan’s mother and there's also interest from the producers to get Malcolm McDowell in the role of Father Merrin. If things go well there's even talk of bringing the whole thing over to Broadway. Pea soup sales at the restaurants around the area are going to go through the roof.