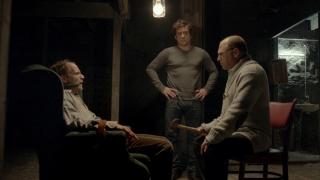 Does a "From Dusk Till Dawn" TV series that Robert Rodriguez will be heavily involved in sound awesome to you? I know me too! What if I told you it was going to be on Univision and I was 99% sure it'll be in Spanish? I know I don't know Spanish either but I watch the channel all the time to! I love their stripper/news anchors and the project is just getting off the ground so I think we have enough time to learn the language so we're all going to be good here.

Magnolia Pictures has done gone and picked up the rights to the Israeli film "Big Bad Wolves". The film is written and directed by Aharon Keshales tracks the lives of three men caught up in a series of brutal murders. Keshales also helmed 2010's underground hit "Rabies", which apparently had a lot of really attractive woman in it but also had subtitles so I'm still not sure what to do there.

Juan Carlos Fresnadillo , the guy who directed "28 Weeks Later", has been confirmed to direct "Villain", a new film about two brothers who find themselves lost in the woods. Shia LaBeouf is also set to star in the film and he knows robots so I think we got a winner on our hands here.

Olivia Wilde and Mark Duplass are set to start in a new horror flick from Lionsgate titled "Reawakening". The film focuses on a doctor who discovers how to bring people back to life and the events that follow after he uses it on his daughter. I'm sure there's awful results but if something like this ever comes to be I think we all know that Michael Douglas will be the first one on our lists to bring back to life. Miss you man.

Did you see the 2011 Israeli film "Rabies"? Me either but some guys I know did and they liked it so that's pretty much an Oscar win in my book. Well the film's creators, Aharon Keshales and Navot Papushado, has set "Big Bad Wolves" as their next project with a 2013 release in mind. The film follows three men who are linked by a series of terrible murders. Kind of like a fun club or something. But without the fun. And no one wants to be in the club.

"The Last Exorcism Part II" may or may not turn out to be hot dookie but that doesn't mean that the folks behind the film can't come up with some pretty entertaining ways to promote the flick. Case in point, a pretty dandy prank they played on a number of beauty shop goers. Is it funny? Yes it is. Is there a chance any of these people will come back to the shop? No. No there isn't.

I think Hot Topic ruined "The Crow" for all of us so I don't think anyone is really excited about the remake that's been kicking around for some time now. But what if I were to tell you that James McAvoy is being tossed around as a possible lead for the film? Would that change your mind? He was good in "Wanted" right? No, you're right. This still sounds awful.

Kodi Smit-Mcphee, the annoying kid from "The Road" is going to be in "Rise of the Planet of the Apes". He may or may not play a monkey. Alright fine, he won't.